Team France has taken out the 2016 Motocross of Nations after a thrilling final moto, while Team Australia has finished eighth. 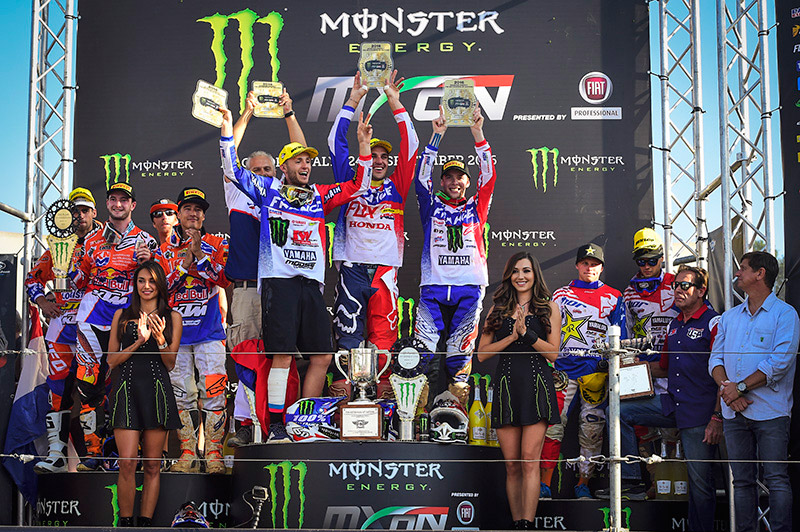 The 20th edition of the Motocross of Nations was held in Maggiora, Italy and there was no shortage of entertainment.

The opening race was taken in stunning fashion by France’s Romain Febvre ahead of hometown rider Antonio Cairoli and Dutchman Kevin Strijbos. Australia’s Todd Waters finished in a respectable seventh place while Mitch Evans was back in 35th.

The American was celebrating his victory after crossing the finish line before a lapper rider landed on his head. There was immediate concern for Anderson following the shocking incident yet he has since confirmed no major damage was done.

Frenchman Gautier Paulin finished the moto in third behind Herlings, with Australia’s Dean Ferris and Evans crossing the line in sixth and 37th places respectively.

Heading into the final moto the championship was still up for grabs, with Teams USA, Netherlands and France all within striking distance of the crown.

Herlings would dominate the final race leading start to finish ahead of Cairoli and fellow countryman Strijbos. Team USA looked set for the overall with Cooper Webb holding fifth place before a small crash near the end of the race cost his team victory.

With Webb unable to make back lost ground in the final moments, France were awarded their third straight MXoN victory. Netherlands were one point further back in second with Team USA dropping to third.

Team Australia would ultimately finish in eighth place after Waters and Ferris battled for 14th and 15th places respectively in moto three.

On the eve of Anaheim 1, Adam Cianciarulo has split with his trainer Aldo Baker. […]

Not since the early days of the sport has a single goggle design brought so much innovation. […]