KSF Ecstar Suzuki re-introduce the factory-supported RMZ-250 to the MX2 class in Australia.

There has been little yellow in the MX2 class in Australia for some time. Suzuki’s factory outfit has focused it’s efforts on the premier class, in 2018, this has changed. KSF Racing launched into the 2017 season with limited support but landed some respectable results and a strong focus on marketing, promotion and mostly, rider development. This caught the attention of Suzuki Australia and KSF Ecstar Suzuki was announced.

Two 450 riders and two 250 riders is a huge undertaking for any team, but the focus of KSF Ecstar Suzuki is to have plenty of yellow on the start line. Two 450 guys amongst 3 classes of racers starts to water down the branding effect for the public watching. So, with four full-time factory riders, 2 permanent development riders in under 19s and the junior class, plus members of the KSF Krew riding Suzuki’s at the events – you will find plenty of Suzuki at the MX Nationals in 2018. The KSF Racing Team is different to just about every other team in the pits. The team owners Kyle and Scott come from a non-moto background. The father and son duo have experience in sport and personal coaching, elite-level sport and Scott has an extensive background in business – it brings an entirely different mindset to the running of a motocross team. It’s a business and a family within the confines of a race team. The guys are smart and a very welcome part of the motocross community. 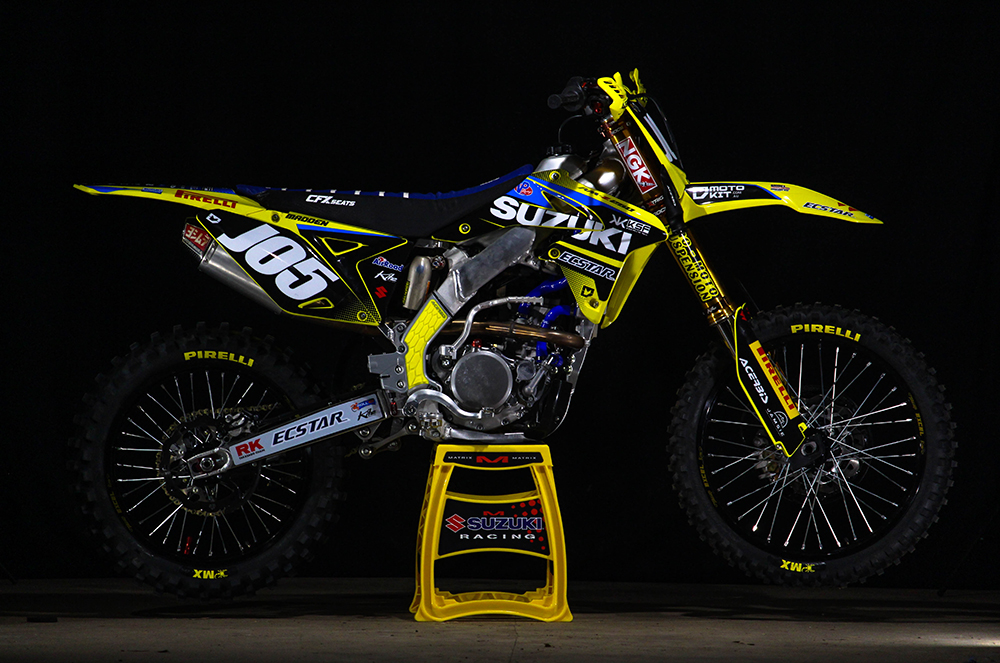 LET’S BUILD A 250
The RM-Z250 is an excellent motorcycle. Sure, the keyboard warriors will say it’s under powered or dated. Ask Hunter Lawrence, I’m sure he will point to his Motocross of Nations first place trophy. The KSF Ecstar riders each started their year on completely standard bikes, worked on a suspension setting and racked up hours at the track. The bikes were kept stock other than suspension for the entire pre-season. To the team, it was important for their riders to become comfortable with the bikes chassis, ergonomics and suspension package before throwing money at a go-fast engine. While the riders were grinding away during pre-season, a motorcycle magician was working equally as hard to tune and extract some usable horsepower out of the Suzuki’s powerplant on their race bikes. Adam Layton is known for his extremely impressive Harley Davidson engine builds. We are talking nitro Harleys, bad arse V-Rods and fat choppers. Adam is a wizard and his machinery is world class. However, Adam and his business APL have been building incredibly fast motocross bikes for many, many years. Remember the JDR Motorsports KTMs? Those things had the APL touch, as did Ryan Marmont’s crazy fast KTM250SX-F around 2006. Many factory race teams reach out to APL to work his Powerflow head magic on their race bikes.
The work that has gone into the engine by isn’t extensive, although the experience of APL has lead to a bike that is national ready. The biggest and most important change to the RM-Z250 is the Powerflow headwork. The Suzuki’s heads are put through APL’s Directional Honing Process, this maximises flow. The seats are then diamond cut before reassembled. APLs blueprint finish not only offers the Suzuki’s improved reliability and longevity but also removes the inaccuracy can occur with hand porting. The Powerflow head is matched with a GET ignition programmed and tuned to get the most out of the Suzuki’s engine work and a full Yoshimura exhaust. There are a few little internal secrets that the team are keeping to themselves when you talk engine performance package, but what they have created is a machine more than capable of running up front at the MX Nationals series. Team riders Jesse Madden and Jordan Hill have pulled more than a few good starts sitting on this engine. 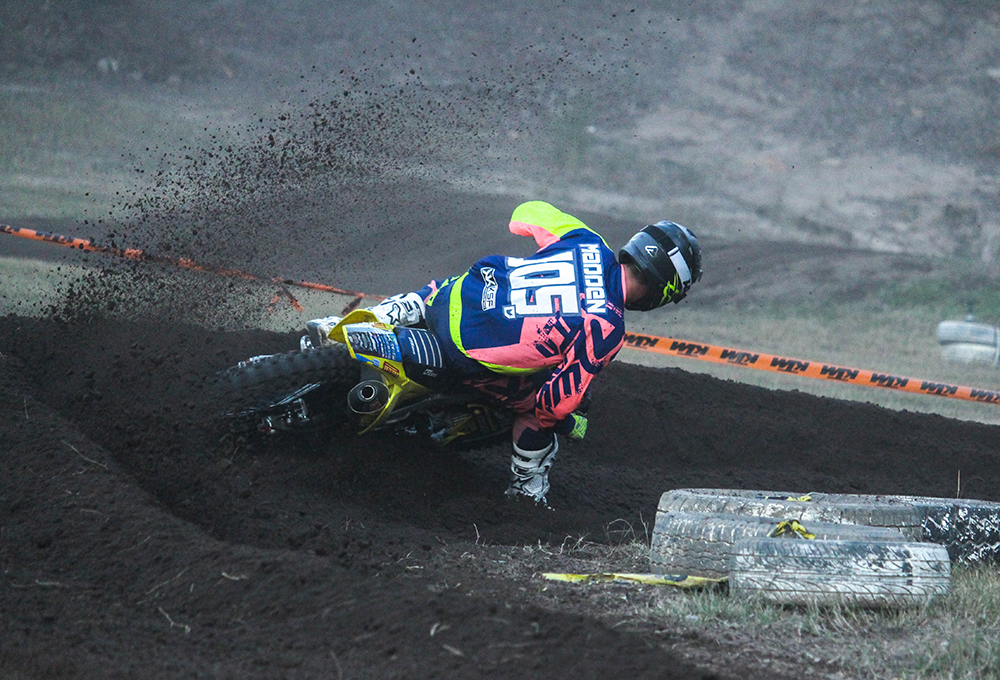 KEEP HER IN LINE
Jesse Madden’s RM-Z250 uses 2018 Suzuki RM-Z450 forks. Rather than opting for full-factory or A-Kit suspension, the team tested the RM-Z450 spring fork, which already comes coated stock from the factory and found Madden to be comfortable with the set-up. X-Trig triple clamps are also equipped to the front of the motorcycle. The rear shock is re-valved and a heavier spring to suit the rigours of the Pirelli MX Nationals. Kite Elite wheels offer superior strength over the standard wheels, the team are running a specially ordered black hub and rim combo, straight from the Kite factory in Italy – trick! The team uses Pirelli tyres, varying compound depending on the circuit and Kite Performance disc rotors are fitted for extra stopping power. Acerbis’ new carbon vented disc guard is fitted up front for protection for the front disc brake. Acerbis plastics are used all round, including X-Force handguards and chain guide. Acerbis have really thrown their support behind the team, kitting the guys out with racewear and helmets as well.
Moto Kit custom graphics are matched to a CFX seat cover to give the bikes that true factory look and feel. An array of Kite Performance parts are littered around the engine and rest of the machine to complete that true race bike appeal. 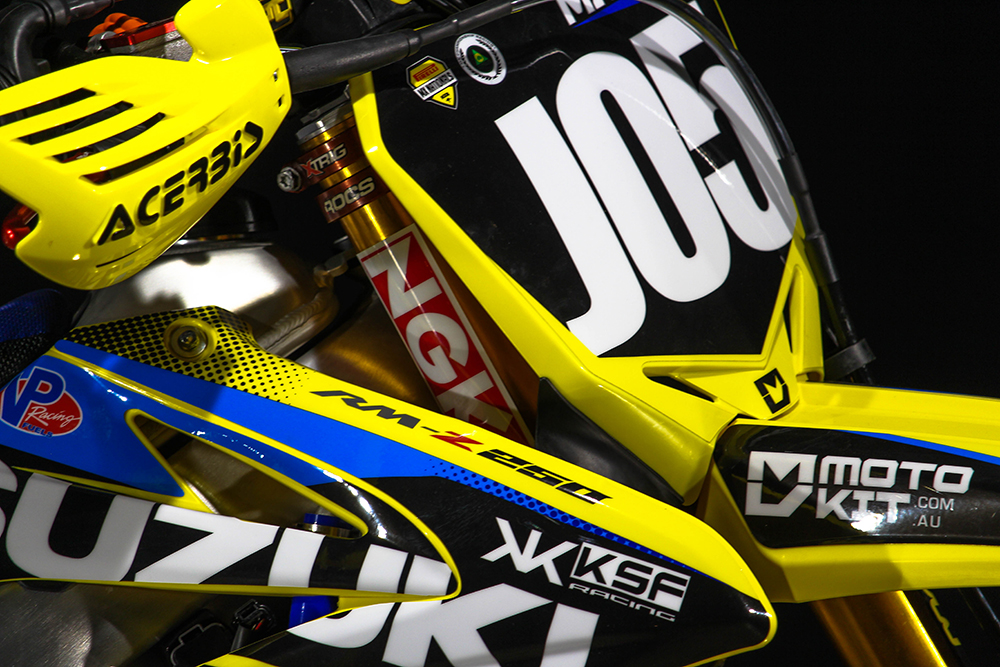 LET’S HAVE ONE
It is entirely possible to build this very race bike, which is very impressive considering Jesse has been able to be competitive against some very big race teams in 2018. One of the coolest parts about the KSF Racing Team is their ability to involve every day riders and fans within their team – something we think is really cool. Their KSF Ecstar Development program has already offered two riders a chance to compete on a KSF Ecstar Suzuki and pit with the team at the MX Nationals, plus they have a young gun racing a Suzuki RM85 around NSW. The newest program launch by KSF is the KSF Krew, a community where riders can purchase products from the teams sponsors and have access to guidance by the factory team. This team is doing some great things within the sport and besides all that, know how to build one sexy, fast and competitive Suzuki RM-Z250. We like, we like a lot.

Round two of Monster Energy Super X was held last night at WIN Stadium, returning to Wollongong for the first time since 2008. […]

The MXGP rider has flown into Europe to begin testing his new RM-Z450 ahead of the 2016 World Championship. […]