Gavin Faith has taken out the opening round of the 2016 AMSOIL Arenacross following a 2-3 result. 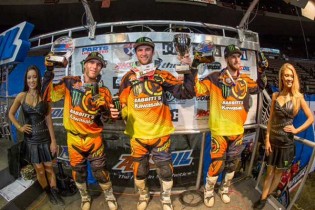 The opening moto was a three way battle between Faith, holeshot winner Gared Steinke and Travis Sewell. The riders exchanged blows throughout the race with Sewell claiming the chequered flag ahead of Faith who pipped Steinke on lap 11. Chris Blose held onto fourth place while 2015 place getter Jacob Hayes recovered to finish fifth after running outside the top ten.

Race one winner Sewell had the chance to pick the inversion for race two however the number 0 case was selected meaning riders would line-up as they finished the opening race.

Main two saw Keith Tucker score the holeshot closely followed by Hayes and Faith. The trio would stay like this for the majority of the race before a last ditch effort by Hayes saw him overtake Tucker on the very last lap to take the win. Blose once again recorded fourth place while race one winner Sewell had a moto to forget, crashing on lap one and struggling to recover, ultimately finishing way back in 15th.

Faith’s 2-3 result was enough to secure the round victory just one point ahead of Hayes (5-1). A consistent pair of motos by Blose allowed him to round out the all Kawasaki podium.

In wake of this morning’s news AUS-X Open have released the following statement regarding James Stewart’s Supercross withdrawal. […]

Husqvarna’s Jason Anderson has taken to Instagram to shed light on his riding style. […]

The 2012 race season will see some big changes at the Berry Sweet Lucas Oil race team. […]