Champion rider Eli Tomac has fulfilled his dream, signing a contract to ride for Monster Energy Kawasaki racing team in 2016. 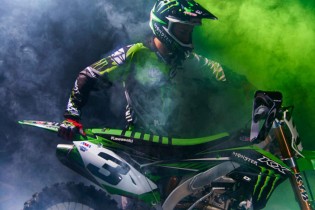 Tomac began the 2015 motocross season on fire winning the first five motos. Heading for a sixth straight win at Colorado he suffered a violent crash, resulting in a dislocated right shoulder and a torn rotator cuff in his left shoulder. Tomac spent the rest of the season recovering and is eyeing off a return for the Monster Energy Supercross opener in January.

“Joining Monster Energy Kawasaki has always been a goal and dream of mine,” said Tomac. “I feel like with a bike and chassis as good as the KX, plus a team totally dedicated to the 450 class, we should be able to do big things in the near future. It’s a new team, new bike and a new year of racing. I can’t wait to get back at it.”

The Monster Energy Kawasaki Racing team is excited to have Tomac on board and Team manager Dan Fahie is confident of a strong 2016 season.

“The new KX450F provides a great platform to build champions,” said Fahie. “I believe we are poised to have a successful 2016 season with Eli and Wil under our tent. Both riders have proven to be top contenders in the 450 class and they are just as enthusiastic as we are to get back to racing and on top of the box.”

KTM’s Daniel ‘Chucky’ Sanders has trumped the field to finish just ahead of teammate Matthew Phillips in securing the 2015 crown. […]