Dunlop-equipped racers finished on top of the dais in all three classes at Sunday’s eighth round of the 2016 MX Nationals at Shepparton in Victoria. 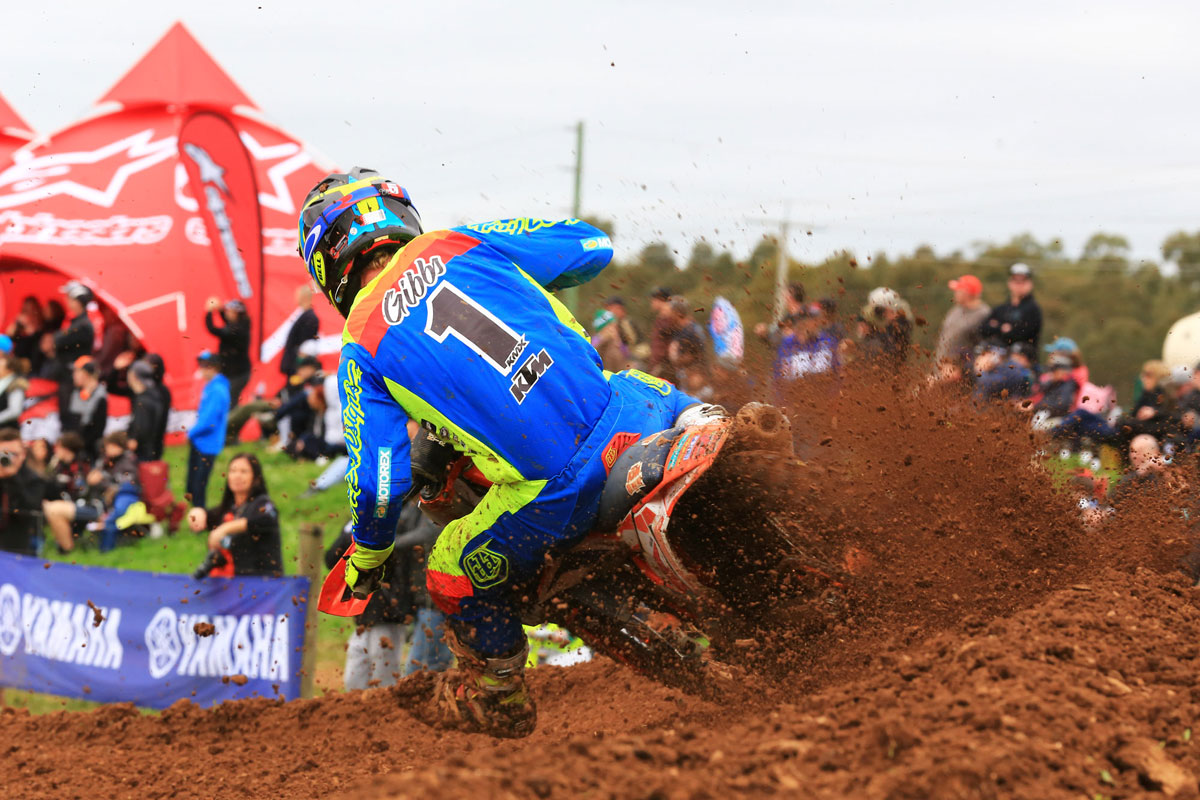 On a technical track that demanded the respect of the country’s best and rewarded consistency and smooth throttle control, KTM Motocross Racing’s defending champion and current red plate-holder Kirk Gibbs was in his element.

Despite riding with a niggling knee injury, Gibbs put KTM on top of the charts in Super Pole, then soldiered to a third in the opening MX1 race.

However it was the second moto that saw him make a real statement as he moved past CDR Yamaha’s Dean Ferris for the race win on the final lap and take the overall as a result.

A disappointed Ferris, who had finished second in the first MX1 outing, was forced to watch his chances of the round win fall by the wayside. A third overall, despite a brace of second places, was a tough pill to swallow.

Gibbs has now extended his championship lead to nine points over his main rival Ferris as Dunlop currently stands 1-2 in the premier class points race.

The MX2 class was filled with drama as DPH Motosport Yamaha’s young star Jed Beaton claimed the round win and finished the day tied for the championship lead.

In the opening race Beaton crossed the finish line in third, but with the front-runners penalised 15 seconds for jumping under yellow flag conditions, Beaton was awarded the win.

In the second MX2 outing Beaton finished second to KTM Motocross Racing’s Caleb Ward to snatch the round victory. Ward also had solid day in the saddle, with his 5-1 scorecard enough for second overall to remain third in the championship title fight.

Serco Yamaha’s Wilson Todd was one of the most affected by the opening race dramas and after the penalties were handed out he finished the race in second place. He backed up that result with a fifth in race two to finish the day in fourth overall.

Meanwhile, in the MXD class, Yamalube Yamaha’s Mitch Evans reveled in the technical, rutted conditions as he stormed to a perfect 1-1 result and take over the championship lead in the process. SD3 Husqvarna’s Kaleb Barham finished the day in fifth.

“It was another exciting weekend for Dunlop as our athletes secured round wins in the MX1, MX2 and MXD divisions and now hold the red plate in all three classes heading into the final two rounds,” commented Dunlop national motorcycle manager Sabastian Mincone.

“My congratulations to Dunlop’s Kirk Gibbs and Dean Ferris, who both displayed fantastic pace all day and put on an exciting show for the Shepparton locals in the premier MX1 category this weekend.

The ninth and penultimate round of the 2016 MX Nationals will be held in three weeks time at Toowoomba, Queensland, on Sunday, 21 August.

Visit www.dunloptyres.com.au or find Dunlop Tyres Australia & New Zealand on Facebook and @ridedunlopau on Instagram for further information on the brand.

Toby Price, Tye Simmonds and David Walsh all landed on the 2016 podium. […]

The Hervey Bay round of the Monster Energy MX Nationals series has ensured an exciting end to the 2013 championship. […]

Ferris and Reardon fly in 1-2 formation at Avalon

CDR Yamaha’s Dean Ferris had continued his sensational year of firsts, when he took his first event SX1 main event win at round four of the Australian Supercross Championships, held at the Avalon Speedway over the weekend. […]