Ryan Dungey has landed on the top spot of the podium in San Diego holding off Aussie legend Chad Reed. 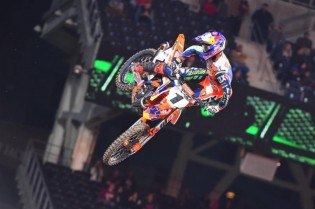 It has been a consistent start to the 2016 season by Ryan Dungey backing up his second place finish in Anaheim to go one better in round two. The Red Bull KTM rider has taken over the overall points lead, putting on a show for the 37 thousand strong Petco Park crowd.

The 450SX main started with Chad Reed pulling away for the holeshot ahead of Justin Brayton and Vince Friese. It didn’t take long for Dungey the 2015 champ to pull into gear quickly moving into first position before the end of lap one. Holeshot winner Reed dropped back to fourth place before regrouping, working back through the pack and passing Brayton to move into second.

Ken Roczen remained competitive for third place and a podium finish before a crash left Brayton with some breathing space. Out in front Dungey and Reed created a sizeable lead with the Aussie pushing for another career win.

Brayton soon got overrun for third with Cole Seely and Anaheim winner Jason Anderson moving past. The two had an intense battle with Anderson pulling away after coming into contact with Seely.

“It was a good night. I got off to decent start and as able to pick my way up to front,” said Dungey.

“Chad was on my heels the whole time, so I couldn’t make a big mistake, although I made a few little ones. It feels good to get the win and move back into the points lead. That’s the plan and it’s working.”

Anderson crossed for third but was later penalised by race officials after he was found jumping during a red flag. During this situation riders must keep two wheels on the ground meaning Anderson would drop back in the standings making way for Seely to be declared third place getter.

Australian hopeful Lawson Bopping had a tough night in San Diego missing the main after initially qualifying 20th in group A earlier in the day.

Sit back, turn up the speakers and enjoy! […]