As the Monster Energy Aus-X Open drew closer, a new event was added to the race program – the 2 stroke cup. I have been involved with Aus-X for a few years, from the perspective where I’m yelling at people through a very loud sound system. I love it, the atmosphere, excitement, the racing, it gives me goose bumps just thinking about it. Supercross has always been a favorite of mine, it was were I excelled through my racing career and still love the idea of hitting a serious set of whoops and big jumps. But I was content with the roll I played at such an amazing event, that was until a certain rider was added to the line up of the 2 stroke cup! 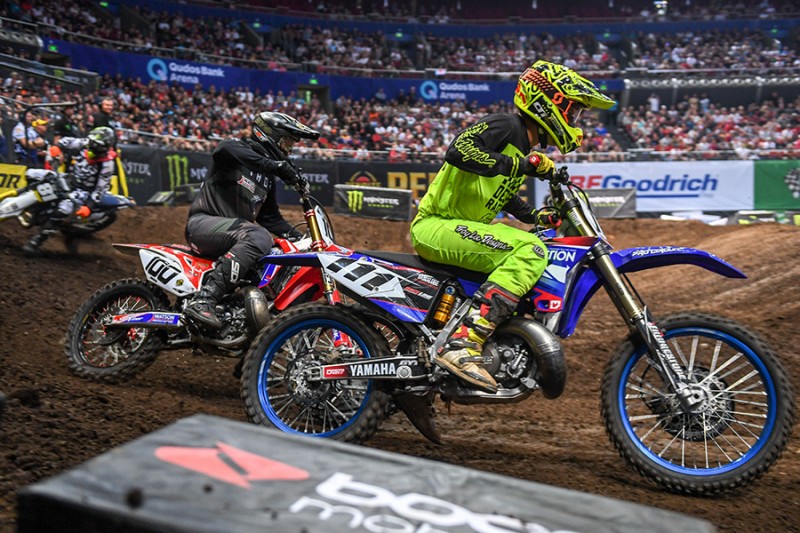 ENTER- THE 2019 YAMAHA YZ250
We approached Yamaha Motor Australia with the idea of building a 250 twi-stroke ready to race in just three weeks and they loved the idea, after all our bike would be raced at one of the biggest races in Oz. The blue machine came into our possession only three weeks prior to event and we had our first ride. Although I had to learn a two-stroke riding style again, I was impressed how well this bike ran straight out of the box. Yamaha has kept this bike looking great with the blue rims and modern styling of the plastics. The standard KYB suspension worked well on the big jumps and bumpy skatey surface (not helped by the fact I had 26psi in tyres as I forgot to check them before riding! Wasn’t getting a puncture). The power was punchy off bottom and through mid just as I remembered on a 2 stroke but did sign off a bit early up top. It did take me a while to get use to the power delivery but by the end of the day I had it down. I also had some serious blisters as a token of months off a bike! Please Yamaha, I appreciate you wanting the grips to last a bit of time, or decades, on the bike but surely you have a better compound you could use that does not resemble a bastard file!

PROJECT SUPERCROSS
Time was running out for me, Aus-X was just around the corner and we still had not been on any SX. We were going to need to get some things in order if we were to tackle the crazy indoor track –
Suspension – This is a must. Especially in whoops this has to be a good setup.
Ergo’s – Everyone needs to feel comfortable on their bike
Power to the ground – Some fine tuning to improve SX abilities
The look – Everyone loves a good looking 2 stroke
Fitness & Speed – No idea 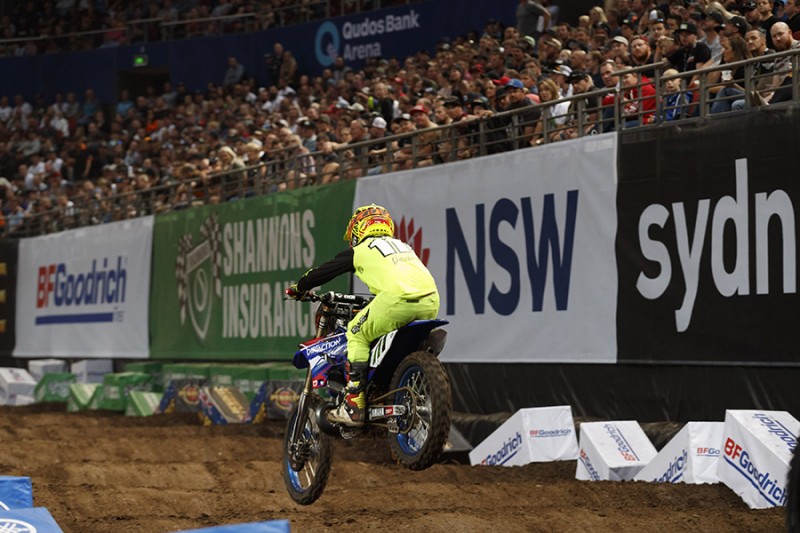 EVERYTHING IS BETTER IN GOLD
Our first mission was the suspension, this was stopping me from doing any SX riding. After a career of racing on some of the best suspension in the business, stock suspension (I’m referring to stiffness, valving and spring rates) just would not cut it. There is nothing wrong with the KYB with the correct settings but we wanted to go a different angle, something we don’t see a lot of here in Australia but usually has the same drooling reaction when the name is mentioned. OHLINS… (insert drooling emoji). Lucky for me I have a close contact that has been working for Ohlins direct in Sweden for the last 15 years. As soon as they heard about our project they wanted to jump on board. We received an amazing looking Ohlins Gold rear shock and for the front an Ohlins internal Cartridge Kit as the 2 stroke fork was different to the current 450 forks. This is a great alternative for the budget conscious and a popular option to those struggling with air fork issues 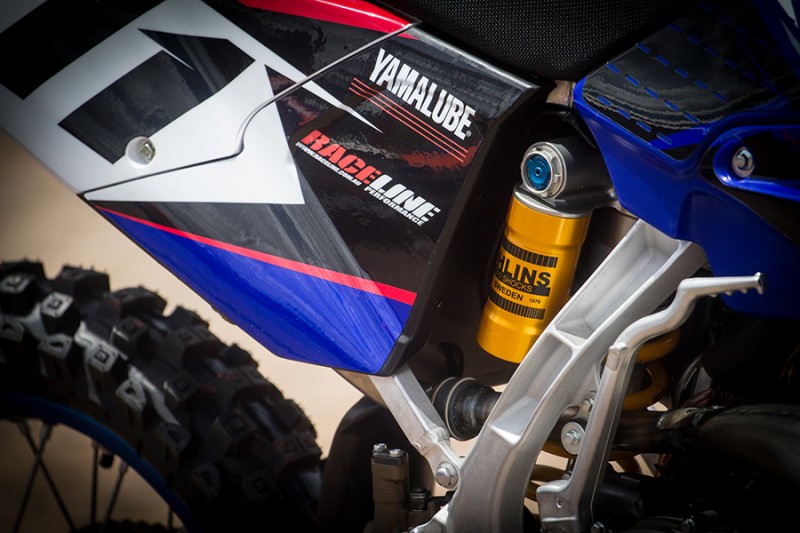 We utilized the resources of Ohlins pulling some settings from their large database of settings and then worked closely with Raceline Performance. These guys can take care of everything performance based for your bike with a reach to some of the best knowledge in the world. They threw a suspension setting in the bike and went out for our first ride on a Supercross track. The setting was near perfect, plenty of bottoming resistance and made me look like a pro on the whoops straight up (it really is all about the suspension). I was astounded how good the bike felt under me, comparing it to some of the best factory suspension I have had the privilege of riding on. Over the next couple of rides and as our speed increased we would beef up the valving a small amount but honestly, we had this suspension dialed in pretty much straight away.

THE FEELS
Anyone that has ridden supercross will know it can be intense, hard work (I had forgotten how hard until I took on this crazy idea) and painful. You need to be comfortable on the bike, a lack in concentration can leave you in some serious trouble. For this we opted to go with ODI grips (oh those soft feels) and the new ODI CFT (Control-Flex-Tech) McGrath bend. These have the ability to adjust the amount of flex feel you get through your bars by simply turning the control on the cross brace. A set of ARC levers proved their durability no matter how hard I threw myself into the wall at the race (did try twice) and a Strike Seats gripper cover helped me from flying off the back when the arms no longer wanted to play ball. 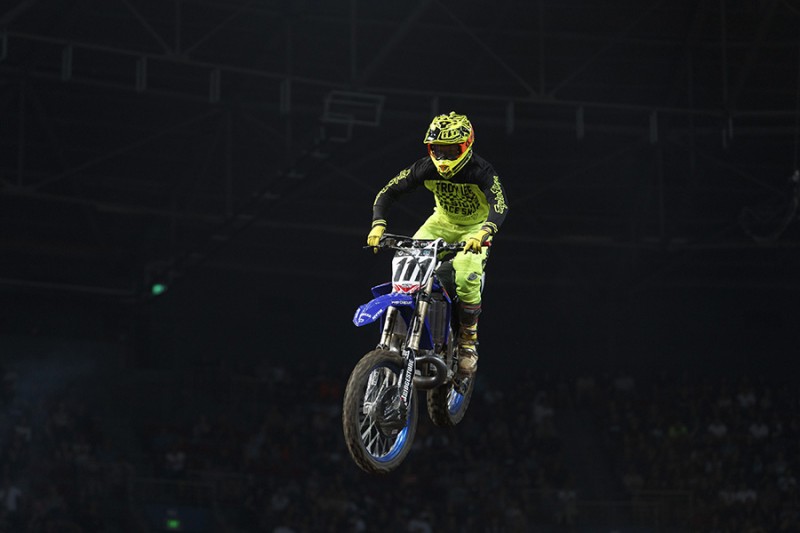 PERFORMANCE
Our blue machine had proven itself both on the motocross and supercross tracks but we wanted a bit more out of it. Raceline Performance is an Authorized dealer of PRO CIRCUIT and for us this was a no brainer to attach a Works pipe and Carbon Fibre Muffler to open up that power range a little more. Some VP Roo 100 fuel laced with Yamalube’s finest lubricants made this beast run clean and crisp, not to mention smell bloody amazing. To keep this machine upright I put my faith in a tyre I know so well, Bridgestone. For me this has been the best brand of tyre I have ridden on giving amazing feedback through the bike, so predictable in what the tyres will do. To assist off the gate we placed a GYTR start button at the lowest suggested setting which was about 90mm down. 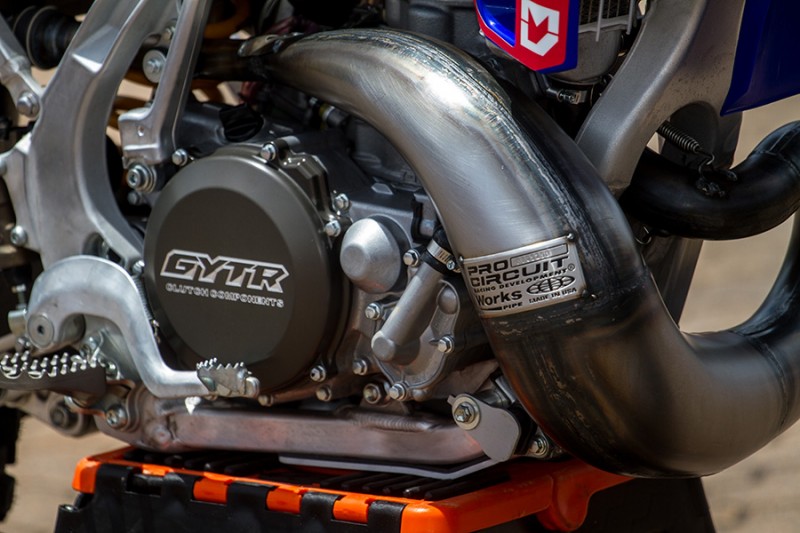 ALL ABOUT THE LOOK
The YZ came together nicely and by this stage we had been able to get on the bike a massive 4 times. It was time to make it look the part. Moto Kit came up with an awesome graphic design that embraced an amount of Yamaha Corporate while adding some modern colour and styling. Some smaller details came in the way of some ceramic coatings on clutch and brake master cylinders, brake carriers done by WORX Performance coatings. These guys stepped up in a very short time and got the parts looking schmick. Finishing touches included a GYTR clutch cover and Lightspeed Carbon Fibre disc cover. 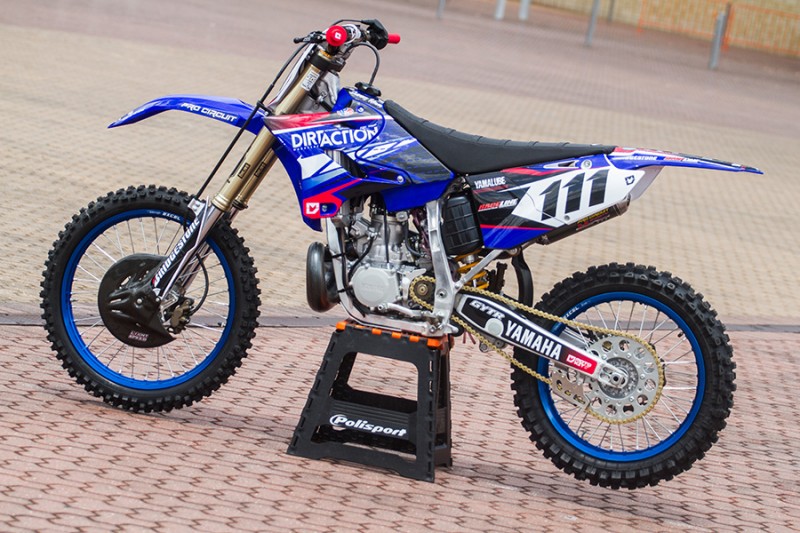 When race day arrived we had only 4 days on the bike. Was I ready? Not really. Speed was improving each day on the bike, as was my fitness but in the big scheme of things, three weeks really wasn’t enough time. We did pull together though a pretty awesome bike in this very short amount of time with the assistance of some great companies to produce a bike that was more then ready for the task at hand. Thank you to these guys, we couldn’t have done it with out them. Although it was a lot of hard work, I still had a heap of fun. The sound of a full grid of 2 strokes echoing at the indoors pleased the masses and more importantly I walked away from the day, even though it was with an old man limp. I look forward to getting the blue machine out on the motocross track and doing some more testing.