We ride Daniel Milner’s KTM500EXC-F – the bike which took on the world and won.

Dirt bike racing is a unique form of motorsport. Not often can a rider or driver in another sport, buy a bike or a car, spend a few hundred dollars on suspension tuning and be competitive. At least, on a local level. Being the athlete that Daniel Milner is, I was intrigued as to whether his bike would be something special, or simply an EXC with some fancy forks. When the rider is literally, the best rider in the world and the KTM500EXC is an excellent motorcycle out of the crate, it is a fair assumption to say the bike doesn’t need a whole lot to carry a rider such as Dan to the top of the sport. I was correct and incorrect with this thought. The bike itself isn’t all that far from the bike you would buy in the local dealer, but the factory knowledge, the suspension work and the ergonomic adjustments have created something oh, so special. 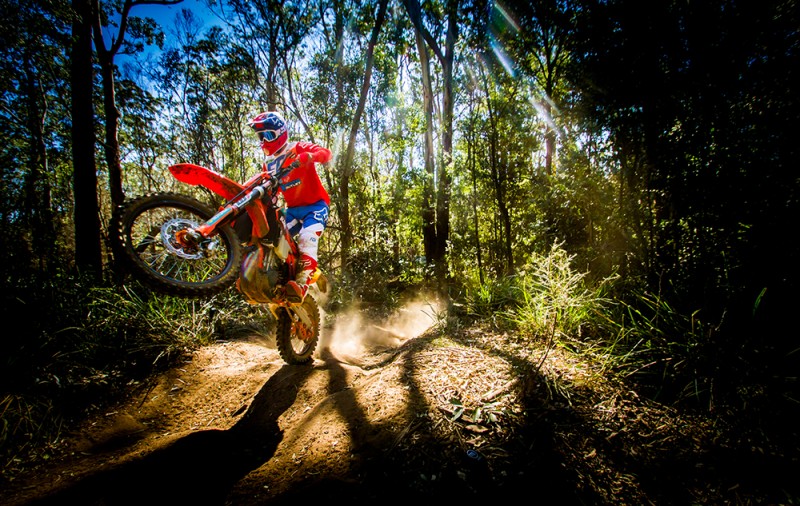 TAKE HER FOR A SPIN
Milner runs a standard feeling set-up. I felt right at home with the ergonomics on the KTM500EXC-F. The ODI handlebars are a fairly low, but conventional bend and I felt instantly comfortable how it meshed with the seat to foot peg ratio. ODI grips are also fitted. The gripper seat fitted to the bike is an aggressive unit available from the KTM Power Parts catalogue and with the type of horsepower being punched out of this thing, it needs to be aggressive. The overall ergonomic feel of the bike isn’t far removed from standard, KTM have nailed that straight from the box. The KTM Off-Road Racing Team are an extremely slick operation. The in-house team build and present their race bikes to the highest level, and although Dan’s bike had done a full race season, you wouldn’t know it. The throttle is light and snappy, the clutch action as new, the seat nice and firm, it’s a top-level race machine presented in an immaculate state, despite the dominating it has done. Mick and team are an excellent team.
Clicking the bike into gear and purring down the trail, the bike feels just like a well-tuned trail bike, it’s smooth and forgiving. The engine is so, so, easy to ride as it’s kept in the low-rpm and surprisingly to me, the suspension felt almost soft, a trait not usually found on a race bike, despite endure bikes being plush and forgiving.
I picked up the pace through the bush and began to fall in love. Keeping the bike in a tall gear and torqueing the big 500 through the bush, the trees very quickly become a complete blur. Mate, this thing is fast, really fast, deceivingly fast. In true 500 fashion, the bike is extremely strong in the bottom-end, without being aggressive – smooth and usable torque, exactly what is needed to go fast in the bush. To be honest, the bike continues to pull and pull into the mid and top, but for the tight and technical terrain we were riding in, it wasn’t getting at high RPM too often! 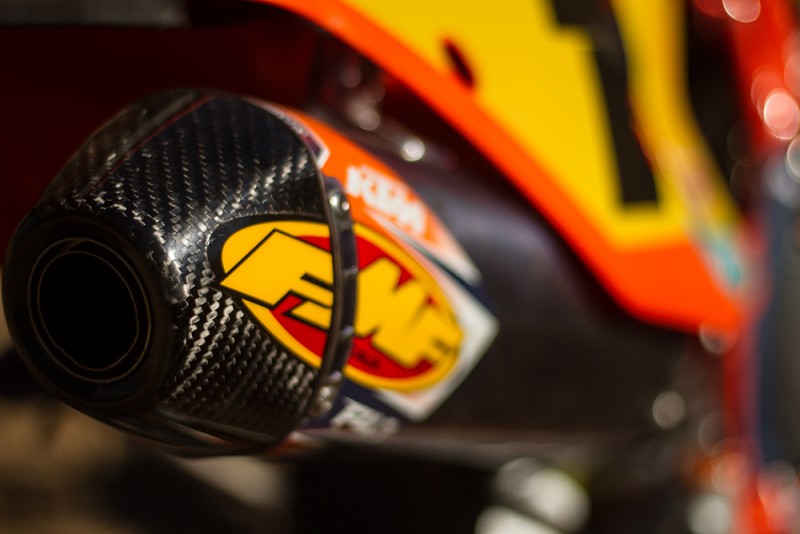 RIDING ON A CLOUD
For my speed, ability and size, this KTM500EXC-F is possibly the best handling bike I have ever ridden. In the trails, it’s forgiving and confidence inspiring. Across high-speed choppy terrain, the bike feels planted and allows you to keep the momentum up and tractoring through the trail. For a big 500, it turned really well as well, obviously the nature of the 500 lends it to be more at home on the open trails, but the set-up by Choice shrinks the bike to be easy to ride in the technical terrain. I am a little at a lost at just how good this thing is, it was good in choppy high-speed stuff, handled the larger bumps easily and tree roots might as well have not been there. On the motocross track, the bike felt plush, but I didn’t go close to bottoming the bike out. I went long, proper long, to the flate, on a tabletop at the top motocross track at Mount Kembla. I left the up-ramp and went for the panic rev thinking I was going to give my wrists a nice tune-up. I landed, and no shit, it felt like I was on a downramp. It just soaked up the impact, got the power to the ground and charged on with minimal fuss. I was dumbfounded. How does this KTM500EXC-F handle so, so well in such a range of conditions. The WP48mm Cone Valve suspension, tuned by Choice Suspension and matched with the factory WP shock was straight-up insanely good. 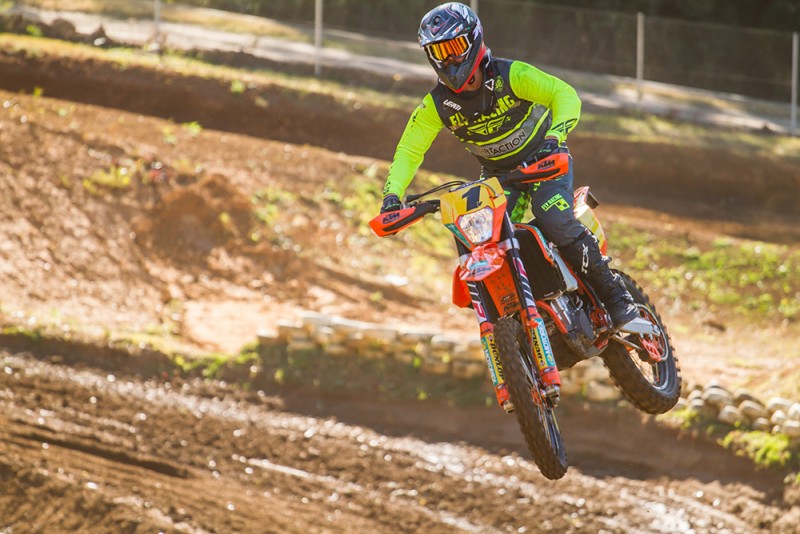 HOW GOOD IS THIS THING?
Let’s remember for a second, Daniel took this set-up to the ISDE and won, he won it all, he dominated. Hat’s off WP, Choice and KTM, this bike absolutely awesome, the suspension is beyond impressive and the engine is strong, smooth and easy to ride. With the amount of horsepower needed to be kept under control, the WP set-up in intently important for a rider of Daniel’s speed.

For the full feature – check out issue #227 of Dirt Action Magazine.