CLOCKWORK ORANGE: DIRT ACTION flies to the Italian island of Sardinia to take in the launch of the 2014 KTM enduro and motocross range 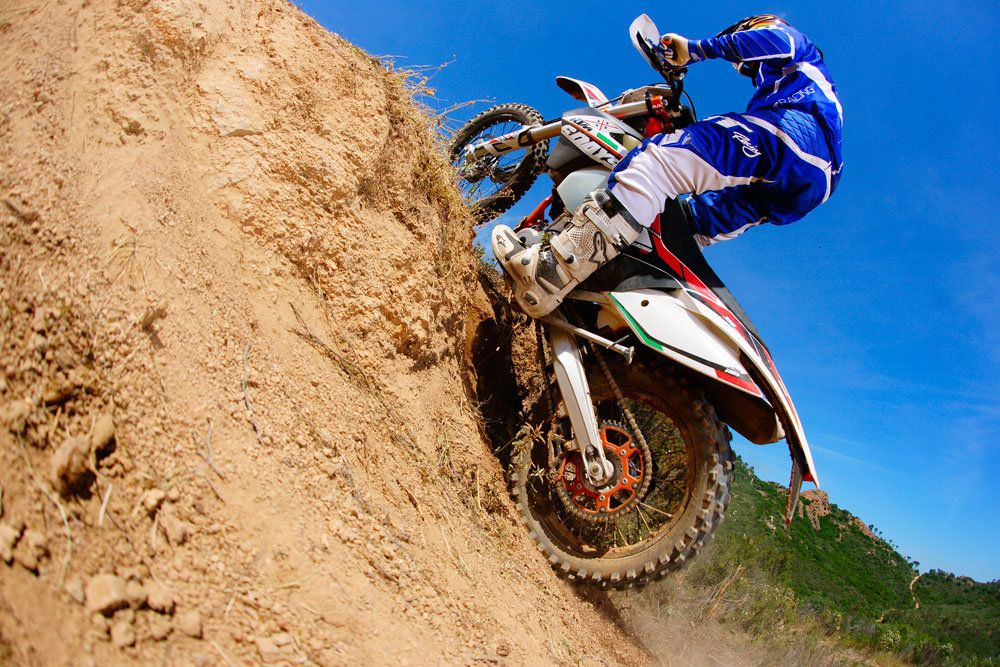 For the launch of its 2014 off-road and motocross range, KTM extended us an invite to the island of Sardinia, just off the coast of Italy, where this year’s ISDE (International Six Day Enduro) is to be held.

It’s a bloody long way to go: three flights and a about a day and a half of travel, in fact — unless you miss a flight. Then it gets way longer and far more complicated. As if intending to experience all possible pain and inconvenience, three Aussie dirtbike journos, including me, did in fact miss the second flight, which was from Dubai to Rome, and the first part of the trip reached a level of complication that was breathtaking.

Our day became one of close verbal combat with bored, disinterested airport staff who showed utter disdain for our plight. Our credit cards were tortured, our tired brains stressed and our pride dented as we sought out alternate flights and, as it turned out, accommodation for the night in Rome in a hotel that looked less like a product of an aesthetics-obsessed culture than a 1930s Russian prison block.

We got back on track the next day and reached Sardinia in a mood to get on some bikes and get some throttle-based stress relief.

We reached the launch site to be greeted by rows of 2014 models of all capacities ready to be ridden from the vineyard that served as the base of operations then up into the Sardinian mountains to explore the two enduro loops and private motocross track, all prepped and waiting.

To begin with, though, we had the technical presentation on the new models, which was done in true KTM style. These launches give us an opportunity to listen to what KTM has to offer for the upcoming model year as presented by the guys who make the decisions and actually conceive of and design every part on the bikes. And they talk to you with personable exuberance for the product that few of us ever witness in dealings with a Japanese manufacturer.

It’s immediately clear that the impetus for many of the changes on a particular model comes from the ride experience reported by the engineers, tester riders and even upper management. For example, chief designer of the enduro range, Bernhard Plazotta, hurt his little finger on a ride this year and so redesigned the handguards to be tougher for 2014. He also did his engineering PhD thesis on triple clamp design, so there’s a mix of the practical and technical approach in how KTM develops its bikes. Through the launch, we get to see just how involved all the staff are in improving the product.

“Everybody in KTM lives motorcycles and lives racing,” explained Joachim Sauer. “We wouldn’t even employ someone that wasn’t able to ride a motorcycle.”

And the figures suggest KTM’s approach is working. Last year, 107,142 orange bikes were sold worldwide — a huge increase on the 64,000 sales in 2009. In 2012, the 350 EXC-F was the biggest-selling model among the 60,000 off-road bikes sold (enduro models dominated KTM’s sales) and that bike has done its part to make KTM the largest European bike manufacturer — measured in turnover; BMW is the largest on sales alone. That’s also helped along by the 100 million euros invested in research and development from 1999 to 2011, which constitutes 6.3 per cent of turnover put back into the future of the product.

There are 260 technicians in the R&D department alone and, yes, they’ve got two-stroke EFI sorted and ready to go. The problem, it was explained, was that the EFI increased weight and the price of the bikes; when KTM pointed this out to dealers the overwhelming consensus was that they didn’t want more expensive two-strokes and KTM should wait until European environmental laws forced it to make the move.

The only 2014 model to receive wholesale changes is the 250EXC-F which, KTM admitted, needed some attention. The 250 isn’t a big seller in Australia (where the 350EXC-F dominates) and no doubt the hope is that the new bike will boost interest and sales for the smallest of the enduro thumpers. The rest of the model line received updates to what is already the premier stable in the dirt world today.

The two enduro loops were 11 and 21 kilometres respectively, the shorter one consisting of a very rocky single track that led to a special test that ended up dusty and rutted as if it was a slice of Australia in Sardinia.

The longer loop was more varied with fast open sections, rocks, tracks barely wider than the tyres with deep, bike-swallowing ditches on either side and just amazing landscape views of the distant harbour and preceding valley. As far as providing a chance to push the bikes goes, KTM came through.

One of the strangest things about international launches is the time difference between the test site and back home. When you arrive at the track it’s perhaps 10pm back home and you’ll ride till it’s 3am in Australia. The problem is your brain still works on Aussie time for the first few days on any overseas trip; while you can generally ease yourself into the local time zone on holiday by soaking in a resort pool and ordering exotic cocktails, on a bike launch you don’t have that luxury.

There’s a period of negotiation between yourself and your brain where you have to convince yourself it’s OK to be riding in the middle of the night and into the early morning. It’s a tough sell at times and the first couple of loops are strange experiences — your mind may accept that you have to get up that hill as long as you can go to sleep as soon as you reach the top. It doesn’t understand why you’re asking it to wheelie up a rock shelf at a time when you should be on the couch watching Operation Repo or fast asleep, dreaming about Sofia Vergara.

So, the launch was mostly about improvements made to the EXC and SX ranges and only one new bike was introduced: the 250 EXC-F.

The 250 has received a new engine and new suspension as well as a new exhaust and clutch. The result of the changes is an increase in torque of 4Nm over the 2012 model which can be felt but is somewhat drowned out by slightly tall gearing. We’ll run a full test on the 250EXC-F in the next issue, so sit tight on that — but rest assured the bike has been improved and will sit atop the major manufacturers’ 250F mountain. There’s not much in the way of Japanese competition, though, is there now?

KTM owns off-road nowadays; there is no Japanese company that can come close. Yamaha and Honda trot out old enduro technology year after year (with the exception of the WR450F) based on tried-and-true engines and suspension. But Japanese enduro innovation has left the building. The WR250F and CRF250X are relics in comparison to the 250EXC-F. There is no 350 or 500 to compare with and the 450EXC-F has no Japanese equal.

Kawasaki and Suzuki aren’t in the larger enduro market at all, with only a trailbike and unregisterable machine on offer in the 450 class and nothing serious in the 250F range.

KTM owns Husaberg and the guy who owns KTM just bought Husqvarna. Game, set and match. We have entered an era in which KTM dominates the sport and the glory days of Japanese enduro bikes are now a distant memory. So much ground has been lost and the eradication of the Japanese two-stroke excluded trail riders who have since embraced the Euro models.

In motocross we recently saw a weekend in which Todd Waters swept a round of the Monster Energy Motocross Nationals while Jeffrey Herlings and Antonio Cairoli smashed their respective FIM motocross rounds, while KTM capped it all off with wins in the 250 and 450 classes of the AMA Supercross. That was unthinkable just five years ago and it’s hard to remember a time when it has ever happened before for any other manufacturer.

KTM has a bike for everybody. That’s what it’s trying to achieve and it’s doing it well. It is winning races and winning fans.

This is the KTM era.

Barreda Penalised in Dakar Shake Up

Overnight leader Joan Barreda was penalised for speeding during stage four, falling to fourth place despite crossing the line in first. […]

The Raceline Pirelli KTM rider scored the first round win of his senior career. […]