Lawson Bopping is the new recruit for the CDR Rockstar Yamaha Team in 2012. 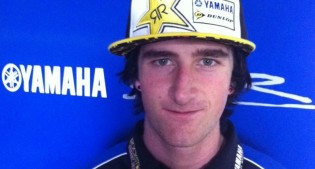 Lawson Bopping is the new recruit for the CDR Rockstar Yamaha Team in 2012.

The powerhouse CDR Rockstar Yamaha team are proud to announce the signing of Lawson Bopping for the 2012 motocross and Super X season.

Bopping will partner Josh Coppins in the 2012 MX Nationals and complete the two rider line up for the motocross season.

Bopping, 22, from Braidwood in New South Wales, comes to the factory Yamaha team after a stunning rookie season in the premier Pro Open class taking seventh overall in the MX Nationals, earning race wins and podium positions along the way as well, as a fourth overall in the Super X championship with a round win at Maitland.

“It was pretty cool to even be considered by Craig and the CDR Rockstar Team but now that the deal is done it is like a dream come true. I’m now an official member of the most successful and professional motocross team in Australia. Every kid that races wants to be a part of this team,” Bopping said excitedly.

“This is a huge opportunity and I look forward to working with Craig and the entire CDR team. They have proven to be the team that takes their riders to the next level and that is exactly the environment I’m looking for as I have set my goals pretty high for 2012.”

“I have spent some time on the Yamaha YZ450F and after a quick day with the team just to familiarize myself with the bike, I feel at home riding it and plan on logging some big hours over the summer period. I have never been so excited or motivated to go riding,” Bopping ends.

Team Owner Craig Dack was track side all year on the lookout for new talent for his team and Bopping stood out like a beacon in the night and comes to the CDR team with just the right age and maturity.

“Lawson was the obvious choice to me when looking at a list of riders over the 2011 season. He comes to CDR at the right time as at 22 he has enough racing experience and race craft to be an instant front runner and also that raw speed that only the youth can generate.”

“He already has tasted success on a satellite team in the Pro Opens with race and round wins in motocross and supercross and he is the perfect choice to learn from team mate Josh Coppins as the CDR Rockstar Team enter their 20th year in professional motocross,” Dack explained.

The 2012 season gets underway on April 1 when the MX Nationals roar to life in Queensland and runs through 10 rounds finishing in August. Bopping and his new CDR Rockstar Team will spend the early part of the year fine tuning the factory YZ450F exactly to Bopping’s liking as well as contesting races in New Zealand with Josh Coppins.

Stand by for more announcements on the CDR Rockstar Team early in the new-year as the team has several big things planned to celebrate 20 years in the business.

Also stay in touch with the team via their Facebook page:  www.facebook.com/cdrrockstaryamaha