The Joeys have progressed to the finale which will be held in Norrkoping, Sweden on the 20th August. 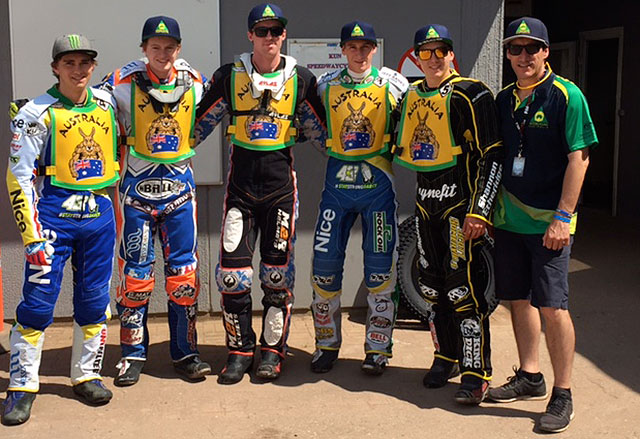 In the most recent semi final event, team Australia finished runner up by just a single point to hosts Denmark. It was a great effort by the youngsters, leading the entire meet before being pipped in the final race.

“We felt unlucky not to win,” said team captain Brady Kurtz. “We lead from the start and throughout the whole meeting until the bitter end where gate positions in the last round of heats went against us. The Danes having 3 out of 4 inside gates on us didn’t help but the main thing was to qualify through to the final, which is great, we did that. We have improvement in us as a team and can now prepare and look forward to the final.”

The result still assures them a direct route to the World Team Cup Final to be held in a few short months. There they will line-up against hosts Sweden, Denmark and Poland. The young Aussie vying for gold are Jack Holder, Brady Kurtz, Jake Allen, Max Fricke, Jye Etheridge and Team Manager Mark Lemon.

A Gofundme page has been set up to assist the team with travel and logistics. There you can buy official merchandise and help out the team – https://www.gofundme.com/aesg4xhw

UDDEVALLA (Sweden), 30 June 2013 – Finally the sun was out to host the main races of the Swedish Grand Prix and Antonio Cairoli obtained his 60th Grand Prix victory and Jeffrey Herlings won for the first time in Uddevalla. […]

Masters to Replace the Injured Doyle at Australian Speedway GP