The Monster Energy/Pro Circuit/Kawasaki rider has broken his wrist in another huge career blow. 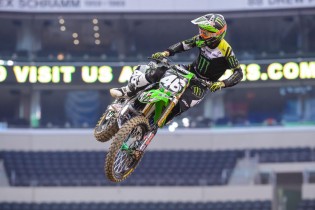 A broken wrist is the latest addition to Cianciarulo’s ever growing injury list which is set to keep him off the bike for up to six weeks.

Following a prolific amateur year which saw him equal James Stewart and Mike Alessi’s mark of 11 career AMA Amateur National Championships, Cianciarulo has been dealt blow after blow, in a frustrating stretch of interrupted seasons.

With the 250SX East series set to kick off in two weeks, Adam was ready to roll however the broken wrist will now sideline him for the opening few rounds.

Toby Price just posted this update on his Facebook page.. […]

Drift HD Ghost is the most advanced self-contained POV camera in its class. […]

CONFIRMATION COMES THROUGH, NO BREAKS FOR KTM’S TOBY

26/03/2014 Shane Booth NEWS Comments Off on CONFIRMATION COMES THROUGH, NO BREAKS FOR KTM’S TOBY

Price given the all clear. […]