Motorcycling Australia has taken time to speak with 2008 A4DE champion Chris Hollis to reflect on his victory and discuss the upcoming 2015 series. 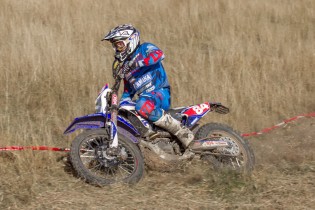 Below is an extract of the interview.

With less than a month remaining until hundreds converge on Tasmania for this year’s 2015 Yamaha A4DE, we took the opportunity to grab a minute with CDR Yamaha’s Chris Hollis to hear about his 2008 A4DE win, and what he’s expecting from his 2015 outing in Van Diemen’s Land.

Firstly, how special was your A4DE win back in 2008 at Warragul in Victoria?

It was really good. It is one of the most prestigious races in Australia when it comes to enduros, so to get my name on the plaque is a pretty cool thing.

Obviously, I’ve always wanted to win it, and I think 2008 was my third year of doing it, so I’m honoured to have my name there and be one of the guys that has won it. I hope I can do it again before I finish up.

How does your 2008 A4DE win rate in comparison to your other achievements in your career?

It’s definitely up there. Between that and the AORC, they’re the two biggest ones, so it’s good to win it once and the AORC twice. It would be good to win a Four Day twice just to keep them the same, but as I said it’s one of the most prestigious races in Australia and it is good to have won it at least once.

Since your A4DE win in 2008, you’ve had plenty of success, and last year finished in third place on the A4DE podium in Dungog alongside Toby Price and your 2014 teammate Daniel Milner – what are your expectations from the event in Tasmania this year?

I’ve never rode in Tasmania before so I’ve got no idea what it is going to be like. I know that it is Matt Phillips’ home town, so the testing will be quite good I’d say and the event should be run really well.

You had a really strong finish to the Australian Off-Road Championship (AORC) season this year. Do you take any confidence from that heading into the A4DE?

For sure. I was injured a fair bit at the start of this year which is unusual for me, so that was quite difficult to deal with. I had to sort of let it roll on and deal with it as it happened, but the end of the year was really good for me which is a good lead in to the Four Day in a couple of weeks.

With a lot of the same riders competing in both the AORC and the A4DE, what are the main differences in the two events?

You go to the Six Day (International Six Days Enduro) and Four Day and you’ve got a whole week to walk the tracks. For me, that is a lot better having a few days on the one test, so I’m pretty confident I’ll be quite quick at the Four Day.

Who is going to be your biggest threat in Tasmania?

There’s a lot of good guys this year – (Daniel) Milner, Toby (Price), (Matthew) Phillips, myself.  I don’t think Daniel is going as dominant as he usually is at the Four Day this year with all of us being back here and being in Tasmania. He’ll definitely be up there, but I don’t think you’ll see him winning every test outright this year.

With this year’s A4DE a couple of weeks away, how are you feeling ahead of heading to Tasmania? What will be your preparations be in the lead up?

To prepare for the A4DE, I do absolutely nothing. I rock up there, I walk the tests and I ride my bike. I don’t need to ride all the time; I’ve been doing it for long enough and I’m not going to forget how to ride a motorbike.

From now until then (the start of the A4DE), I’ll keep my fitness up to speed, but in terms of bike time I won’t do much at all, because I want to be excited and pumped when I go to race. After doing it for so long, it’s hard to ride every day and train every day – you burn yourself out and it happens all the time.

Obviously that works for you, but do you know of any other riders that have that approach as well, or is it just something that is unique to you?

I think it’s just because I’m older. I’m 31 now and been doing it for a long time. I’ve raced all around the world and done every race there is imaginable pretty much.

I think it is just experience for me. Enduro is one of those things that a lot of the time, experience is what makes you fast; being able to think on your toes and not make mistakes.

You’ve always got young guys coming through every year that are going to be the next Toby Price. But most of the time, they’re fast, but can’t think at the same time, which means they get either injured or hurt and sort of fizzle out.

For me, I just try to keep myself fit and I don’t need to be on the bike all the time. As long as I keep my fitness levels off the bike quite high, I know what I need to do and what I’m after.

Thanks Chris, we really appreciate your time!

No worries, too easy!