As the 2016 season wraps up Feld Entertainment have already announced details for next year’s series. 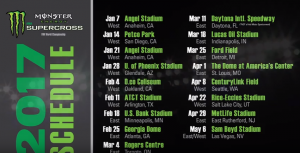 Racing will kick off on January 7th at Angel Stadium for the annual A1 blockbuster. The tour will then continue for 17 rounds including a pit stop at Seattle for the first time since 2014.

Utah and Minneapolis will also make an appearance after last playing host in 2013. Following just one season, Foxborough has been removed from the schedule alongside Santa Clara and the second instalment of Petco Park.

Relive the action from round twelve of the AMA Monster Energy Supercross series.