Motorcycling Australia is excited to announce that this coming Sunday the 24th of July we will be officially presenting the 2015 International Six Days Enduro (ISDE) team with their long awaited trophies at Rounds 7 & 8 of the Yamaha Australian Off-Road Championship at Hedley in Victoria. 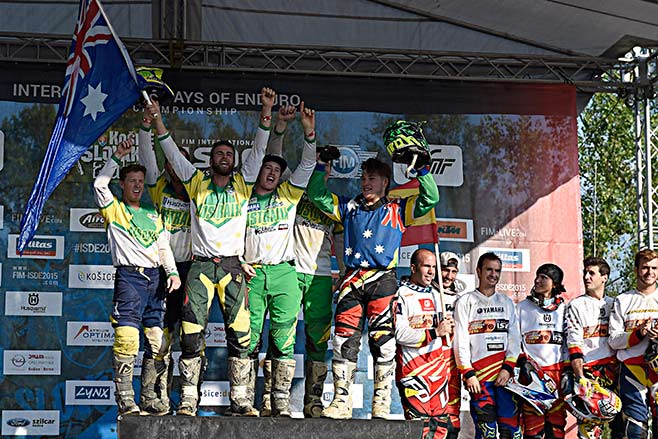 Due to a dispute at the event in 2015 the Australian Senior Trophy Team were denied being awarded with their World Trophy and Medallions, but Sunday will see the team officially presented with their long anticipated awards.

This announcement resulted in Australia taking a clean sweep at the event in 2015, with all three teams winning their respective classes.

Acting CEO of Motorcycling Australia, Peter Doyle once again congratulates the ISDE teams on their accomplishments.

“This team has raised the bar for all the other countries and we all look forward to following their achievements again in 2016,” he said.

“It has been a difficult and uncertain time recently with funding cuts and doubts that the team would be able to defend its crown this year.

“We are very pleased however to see the Motorcycle industry, MA members and the majority of state bodies have all come together to ensure the team will have that opportunity,” Doyle concluded.

Motorcycling Australia’s Off-Road Coordinator Matthew Falvo also shared in the pleasure of being able to award to 2015 ISDE teams with their trophies this weekend.

“It will be great to finally be able to present the Senior, Junior and Women’s Trophy teams with their World Trophies after a hard fought battle in Slovakia,” he said.

“I am sure all the team members will be happy to receive their trophies and will now be able to switch their attention to this year’s ISDE where they will be looking to defend their titles.

“On behalf of Motorcycling Australia we would like to congratulate the teams on their efforts in 2015, and wish them good luck overseas again this year,” Falvo concluded.

With the selections done and dusted the Senior, Junior and Women’s Trophy teams are now in the preparations to make the journey to Navarra, Spain to compete in the 2016 ISDE this October 11-16.

Webb Claims Round Victory in Tennesse

The Yamaha rider finished 2-1 in a brilliant display of racing. […]

Serco Yamaha’s Luke Styke surged home to win the final round of the Australian Supercross Championship and in the process take the overall championship win making it a near perfect season for Styke and the Serco Yamaha team. […]

When Craig Dack retired in 1992, the tradition of gracing riders with their title-winning bikes had long since been eradicated. […]