The 2013 KX 250F has been tweaked internally and externally with a host of updates. We headed to the track to put some laps in on the new green machine

For almost all of the past decade, the KX 250F has been raced into the limelight by Mitch Payton’s Monster Energy Pro Circuit Kawasaki team, and over the last few years Kawasaki has made a point of showing the developments made on its race bikes.

The year 2013 is no different as Kawasaki strives to further improve the 250F and show the gap between race bike and production is closing. It has even changed the look of the bike for next year to closely mimic its factory racing beasts. Along with the cosmetic updates come a bunch of changes aimed at improving just about every aspect of the bike.

In a nutshell, the new 250F has a redesigned frame which is 4mm slimmer, is wrapped with all new plastic and offers a flatter seating position. A new intake allows a straighter induction and increases performance; this is paired with the adjustable power maps via the DFI couplers, much the same as the KX 450F. For their second year on the bike, the tube diameters of the separate function forks have been increased and the settings tweaked to offer better bottoming resistance.

What does all this mean? Read on and see what we thought. 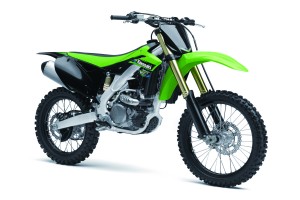 Easy on the eye

Cosmetically, the KX 250F has a completely new set of plastics — but not just for looks. They have been designed to have smaller gaps between panels and to give the riders a more seamless feel when moving around on the bike. I didn’t have the problem of getting caught on anything while out on the track and the side-plate-to-radiator-shroud transition felt smooth.

The plastics were also redesigned to work with the new frame, which is slimmer than last year’s. The seat is flatter which allows for easy forward and rearward movement. My first reaction to the thinner ergonomics was that the bike felt almost too skinny between my knees. It’s a feeling I remember from earlier model KTM’s; I think it’s actually possible to be too slim, which gives the bike the feel of a minibike.

A few laps in and I was OK with it, though, and it definitely adds to the light and nimble feel this bike has which is a positive. I think Kawi should hold it there, though — no more diets or it may start to feel too slim around the seat.

The addition of black rear fender, black silencer end cap and silver-embossed clutch cover are all new and designed to mimic the look of their race-team bikes. Combine these with the black number plates, fork protectors and rims, plus the blue anodised parts sprinkled across the bike, and Kawasaki is really making an effort to have that “factory” look. 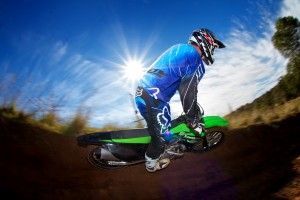 As seems to be the trend in production 250Fs, this bike is fast revving. You notice it as soon as the KXF fires up. Even while it’s still in neutral, give the throttle a few blips and the bike screams and is back to idle before you know it.

Several updates were specifically aimed at bringing about this characteristic. The biggest was the change made to the bike’s intake: Kawasaki has straightened it out, giving a more direct route for air into the combustion chamber. The goal was to increase high-rpm performance and this is the biggest difference I noticed on this bike.

Through the bottom end and midrange, the bike likes a few extra rpm so I made sure I wasn’t too scared to oblige. Some smart clutch work will get you through it, no problem, but it’s when I got this thing screaming that it impressed me most. The bike’s performance didn’t drop off a cliff when it hit the rev limiter. If you needed to hold a gear for a few extra metres before a turn, you weren’t punished with a major drop in power output. It’s a handy trait to have on a 250F and will save you a few gear shifts per lap.

This bike liked to be ridden in the upper end of its power curve and will best reward riders who can do that. It doesn’t lack bottom end or midrange but it doesn’t hit hard there, either. Generally, it’s a bit of a trade-off on the smaller-bore bikes: either a slightly slower-revving, torquey engine with more bottom to mid or a fast, high-revving engine with great top end. This bike is more the latter.

I’ve tested high-performance race-team 250Fs in the past and that’s the feel you get from this bike; it’s the feel Kawasaki claims the bike has and it’s great for experienced riders who can keep it on the pipe. Clubman or juniors new to riding 250Fs may need to add a tooth or two to the rear sprocket to give the feel of a little more punch down low.

The addition of the DFI couplers to the 250F is a big tick in my book. It allows very quick and easy adjustment of the bike’s mapping between the three pre-programmed plugs: standard (green), soft (white) and hard (black). Keep in mind that the descriptions relate to track surface, not rider ability. So, for instance, the “hard” plug is for hard-packed tracks and offers a slightly mellower map. 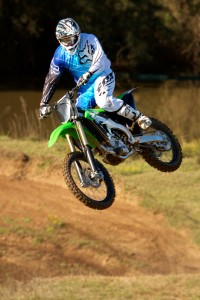 The new frame and the larger fork inner tube diameter, from 47 up to 48mm, are the major handling updates for 2013. Four millimetres doesn’t sound like much but I felt it straight away, adding to the nimble feel a 250F should have.

The updates made to the forks are claimed to give a more planted feel and the larger-diameter tubes increase front-end stiffness. Well, out on the track, the front end does feel direct. The feedback you get is positive and the bike will go where you point it.

I’ve never been a huge fan of rubber-mounted handlebar clamps and that hasn’t changed. I clipped the front end slightly on the top of a down ramp and it caused the bars to twist, enough that I had to find a post to knock them back straight before continuing. Although it’s not a direct handling concern, it’s really the only negative I found and one that can be fixed with a new top triple clamp.

The KXF handled hard hits very well, absorbing jumps without a hard metal-to-metal bottom-out. As a package, the bike worked well. The forks and shock have received updated valving, too, and everything did what it should. The bike settled well into ruts and stayed balanced through to the exit with no struggling to keep it tipped in. There was no sign of it wanting to stand up early at any point in the corner, which points to a well-balanced bike.

This is a very capable package right off the showroom floor. This bike has characteristics that only a few years ago were saved for high-end race bikes. These days, in a fight to win the battle on the showroom floor, manufacturers are really starting to pass on more of the secrets they once kept for their race bikes. It revs hard, likes to be kept on song and will reward a rider who can do just that. 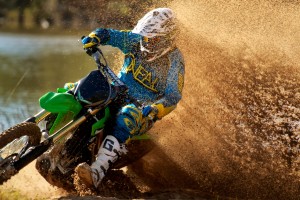 The 250 now features the same plug-and-play DFI couplers as its bigger brother the KX 450F. Using the three DFI couplers provided, riders can quickly and easily access their choice of three maps (standard, hard, soft) provided in the new ECU.

The new frame is slimmer by 4mm. It features a flatter tank-seat line and the new seamlessly integrated bodywork is designed to make it easier to move around.

The intake now approaches the cylinder at a steeper angle, allowing air a more direct route to the combustion chamber. Along with a higher combustion ratio and other engine updates, this offers increased high-rpm performance.

For its second year in production, the SFF receives thicker fork tubes and new works-style Type 2 internal construction. The changes are aimed at giving a more planted feel at the front along with increased damping performance and ride comfort. SFF also offers greater bottoming resistance and increased stability when on the brakes or landing from jumps.

I was impressed with the 2013 Kawasaki KX250F. The engine is very strong; it pulls hard right into the high-rev range and that was the main thing that stuck in my mind when riding the 250. I like the slimmer feel of the bike. It’s easy to move around on though I couldn’t get comfortable with the handlebars. I was surprised at how firm the suspension was; even when coming up a bit short on jumps and hitting big bumps, it stood up to the occasion. The black plastics need a decal on them to keep them looking good as they scratched up a little when we were riding, but most guys will throw a set of numbers on there and it will complete the new look of the bike. I’ve been a massive fan of the adjustable ignition plugs; I’ve used those plenty on the project Kawasaki KX450F. It’s great that they have been implemented on the 250. Overall, this new KX250F is pretty impressive. 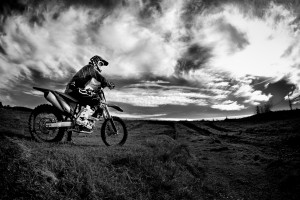