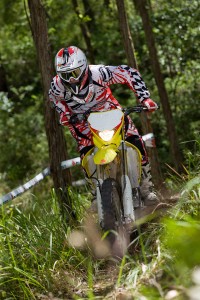 The trees blur in my peripheral vision as tunnel vision sets in, screwing on the throttle of the newest competition enduro model to hit the market, the 2010 Suzuki RMX450ZL0, as hard as my fear factor will allow. Backing off the responsive throttle and diving hard on the brakes, I duck and weave between the trees of the excitable Dungog (NSW) loop set-up by the Suzuki staff. My motocross blood has me thriving on the aggressive nature and responsive EFI motor of the RMX, a machine that is based heavily on the production motocross 450 machine, the RM-Z450, while the trail rider enthusiast inside is loving the forgivable nature of the suspension as I flick into cruise mode.

With a couple of loops under my belt I head back to camp for a bottle of water and some more hospitality from the ever-professional and accommodating Suzuki staff at the Australian media launch for the 2010 Suzuki RMX450Z. 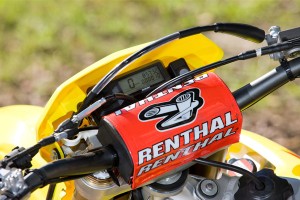 A Wolf In Sheeps Clothing

Is this bike simply a Suzuki RM-Z450 with a headlight? In brief, it may seem that way, looking deeper, it is a hop skip and jump away from the popular and championship winning motocross bike and a leap for Suzuki into the 450 competition enduro market.

For starters, the bike is $200 dearer than the motocross machine at $11,790. It’s pretty decent bang for your buck for a bike that features a trick headlight, an 18-inch rear, a side-stand and the biggest addition, an electric start as well as motor and suspension modifications to suit the trail. Add up the price of a side stand and an aftermarket headlight and you will be getting close to the budget of $200 in turning your RM-Z into an enduro machine, let alone an electic start.

Like its RM-Z brothers, the RM-X sports the EFI system that began gracing the RMZ450 in 2008, but it differs with a more enduro specific suspension set-up. The motor is very familiar in appearance to the motocrosser, with the inclusion of the starter motor on the left hand side of the donk. The styling is extremely similar to the RMZ, especially being that it doesn’t have any ADR bulk bolted onto it.

No ADR bulk? Yes, correct, this enduro machine doesn’t comply with Australian Design Rules and is unable to be road- registrable. A tree carving weapon begging to be punched through the Aussie bush not being registrable may seem strange, and an interesting marketing and business decision by the Suzuki Corporation. However, as it was explained in the conference during the launch it was clearly outlined that getting the bike ADR approved in the near future is high on the companies list as they continue to monitor the financial viability of the extensive operation.

For the lucky states that have recreational registration available, you will be able to carve through the bush of legal areas across the state. For the rest of us, the only place you will see the RM-X ridden will be private property, race meetings and ride parks – for now. 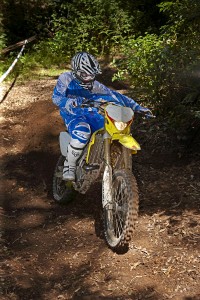 The Suzuki team have made it very clear that this machine has not been introduced into their line-up to replace the high selling DR-Z400E, but rather a new inclusion into their broad range of off-road machines. A more aggressive race-ready off-road motorcycle that the Suzuki enthusiast can step to when they have found the limits of the trail-orientated DR-Z if you will.

Being that the DR-Z is a true-blooded trail stead, it isn’t a surprise that as you first throw leg over the RM-X that you are instantly presented with a flat, slim, aggressive feeling machine when compared to the comfortable, lounge chair feeling, sit in style of the time-tested DR-Z. Not to compare the two distinctively different motorcycles, but ten years of research, development and technology advances are instantly apparent within the first few seconds of throwing a leg over the bike.

The dash is modern, with a simple push button ignition and neat and tidy instrument panel. It is spacious, slim and the aim to create a competition motorcycle where saving weight is paramount is evident in the simplicity of the electronics that you are presented with just north of the handlebars. 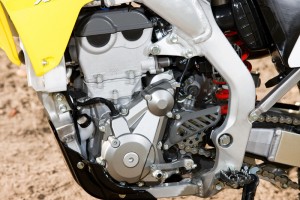 With precision and ease, a push of the electric start turned the static, pristinely prepared RMX press bike into a barking and angry sounding enduro weapon, ready to be pointed into the trees of the twisting trail that carved its way through the hills of the Dungog property. Firing off into the unknown, I began working my way around the loop to see how it would handle the mixture of trail that the forest would throw against the Suzuki.

Darting through the trees, it was an absolute blast. The bike is so nimble and aggressive feeling, it just makes you want to push harder and harder through the trees. It makes light work of the tight stuff.

If you are looking at taking off from point A with the rear wheel lit up and the clutch fanning as you vigorously click gears aiming to get to point B as fast as you possibly can, this bike will impress you – it‘s all about going hard. The flat, spacious ergonomics promote an aggressive style, something I felt at home with since spending the majority of my time on MX bikes. The bike is very thin between your legs, another motocross trait, something that is great for riding through the trees on the pegs. But on the flip side of having such a thin bike, the petrol tank is only 6.2 litres, not a huge tank if you are preparing for a hefty trail ride.

While we are on the case of the tank, the nifty dash also has a warning fuel light, indicating when there is 1.5 litres to spare. Although with EFI not allowing the bike to run completely out of fuel, if that light comes on, it is time to find a service station quick smart or find yourself with a hefty push ahead.

The suspension is a lot softer than the RMZ motocross bike, the initial stroke of the fork is soft and it takes little more than a mere bump to blow past it and push the suspension into the mid part of the suspension action. This is where the Suzuki handles the best, with the bike loaded and compressed, say in a rut, it is in complete control, it just glues to the turn and gets out of there before you can say “Suzuki RMX-450ZL0”.

Jumping off erosion mounds and hucking drop offs the suspension does blow through fairly easily. Tipping in at the over 85kg without gear, I’m not the lightest character to jump aboard, but never the less, neither are the majority of potential buyers for this motorcycle.

Someone looking to race this bike in the odd motocross race, or is an expert level pace in the bush will need to look at a re-valve to give it a firmer handling when it comes to the big hits, while trailriders may look at going the opposite, to create a plusher ride for the RM-X.

As it comes standard, the bike is a pretty good happy medium, it’s relatively cushy for the open trail where you switch off and take in the scenery, but the harder you push it the better it works once you get into the trees.

To me, riding this bike was a hoot. It is a competition bread enduro race bike, not a trail bike and If I was looking to have a bike to race enduro, while still doing the occasional Amcross and the odd trailride at a ride park, this bike would suit me down to the ground. It’s an aggressive bike suited to a rider who loves to really ride their bike hard and fast, without being beaten up along the way. If the RM-X was ADRed or if NSW took on the idea of recreational registration, I would be very keen to have one of these sitting in the garage, but being that I can’t go on trailrides with my old man takes the urge out of it a little bit – maybe I should move to VIC?

If you love the aggressive feel of your motocrosser, but want to dodge more trees and hop more logs, get down to your local Suzuki dealer and check one out, it could be your next rig. 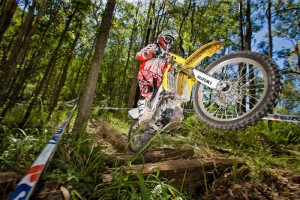 Greg Smith is known for his awesome photography, but he is also an avid trailrider and knows his way around a bike. iKapture as you will most know him came along to give his opinion on the bike.

“The bike is aggressively designed, it really does pretty much replicate an RM-Z. The seat is an RM-Z seat, for trailriding the seat is probably a bit firm, but really its aimed at the aggressive enduro rider, so for that angle it seems good, its seems on the money. But it a very aggressive machine right across the board.” Spoke iKap of the ergonomics of the RM-X.

“I like the engine of the bike. It seems torqey and responsive, its not too aggressive that it rips your arms out, with a good over-rev so you can keep it wide open on the fire trails if you wish. While its got enough torque to ride comfortably through the single track. To compare it to another bike, as in a WRF or CRF-X, it’s a bit more overboard than either of them. Its more sharp, its more motocrossey, its a lot more of a competition enduro bike when compared to those two where you can get away with just riding on them for most of the day without having to stand up, without having to be aggressive. Those bikes are just a bit more user-friendly.”

“Today, the bike was good in the loam. It is just so nicely balanced and so predictable. You could ride it really good. On a nice smooth trail, it is as good as you would need it straight from the showroom floor” When things start to get dusty and skatey, it was a little loose in the front end, when the trails nice and flowing without too many sharp hits, the suspension handled well. But throw in a sharp hit it became a little deflective and a little unpredictable, but getting the suspension valved to suit the rider would help that.”

“For an avid enduro rider, this bike is on the money, the front end could pose a slight issue, but one that is easily rectified” “ I do like the bike, and it is very tempting to lay down the cheque book, but not being able to ride out of my front door and along the road to a trail poses an issue for me”

“I think it is more of an intermediate to pro-level bike, but that is really where the bike is meant to be, and where it has been marketed and designed for so in that regard and for that need, the bike is impressive.”