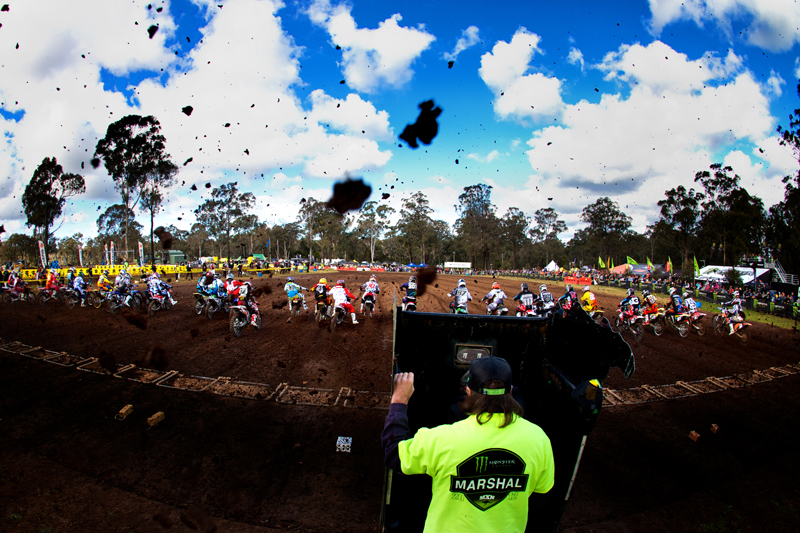 THE SOUND OF A PACKED STARTLINE

It’s the point when the five-second board appears that the sheer guttural roar of a line of four-strokes vibrates the ground and punches through your chest.

The sweeping hills of Conondale, the rutted corners of Appin and ever-changing surface of Coolum are just three examples of why Australia has some of the best tracks in the world.

The mid-day heat, the long straights, huge jumps and sand sections all conspire to find a machine’s weakness and exploit it till it breaks.

For all of the reasons that are obvious from the moment the gate drops, motocross is one of the most physically brutal sports on the planet. To win is to put in the work; there is no other way.

Motocross can be a grand game of strategy, played at high speeds and at high risk. The great riders think their way around a track, through each moto and through each season.

Motocross tracks aren’t built in the middle of town. These days, many of them aren’t even built anywhere near a town. You have to travel and through travel you get to see this awesome country we live in.

Three major classes and a huge host of support classes will make the 2013 season one of the busiest in memory. WEM will have its hands full.

The pits at the Monster Energy Motocross Nationals is a huge, welcoming display of colour and an indication the sport is doing alright. The effort the teams and privateers go through is enormous and is sure to create a good and lasting memory with any spectator that takes the walk through.

The number of classic races that have gone down at places like Broadford, Coolum, Appin and Murray Bridge is almost unfathomable. Chad Reed breaking his leg at Hervey Bay, Reed versus Reardon at Raymond Terrace, Marmont’s close points wins at Coolum, or the great Aussie charge at the Broadford GP. The list goes on and history keeps being written, with the last five years throwing up some of the best racing ever seen.

Following a retirement of two years, Townley has confirmed he will return to full time racing striking a deal with Suzuki for 2016. […]

The 2016 MX Nationals is shaping up to be one of the most action packed championships in a number of years, announcing Thor as the naming rights sponsor of the MX1 class. […]

Yamaha supported Cheyne Boyd has had a perfect day out at Coolum to seal the 2014 Monster Energy MX Nationals Vets 30-39 year old Championship. […]