It will be a sea of blue on and off the track as Yamaha Motor Australia step up their involvement in the 2016 Australian Off Road Championship, starting on March 19, In Queensland. 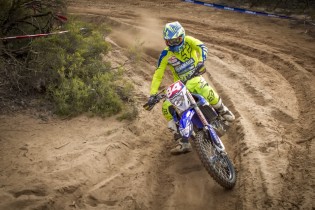 With the introduction of five new off road models in the past 18 months, the WR250F, YZ250FX, YZ250X, WR450F and the YZ450FX, Yamaha have injected plenty of life back into off road racing in recent times and have backed that up with the naming rights sponsorship of the prestigious championship.

“Racing is a major part of the Yamaha business and brand,” states Motorsport Manager, Ray Howard. “For a long time now, Yamaha Motor Australia have backed not only riders and teams, but also events and series organisers, to keep racing in Australia healthy and prosperous.

“Our relationship with the AORC goes back many years and it has become a highly regarded championship to win recently and has proven to be a successful development grounds for riders looking to further their careers overseas. Toby Price, winner of the Dakar rally, Daniel Milner, E2 class winner at the 2014 ISDE and second Outright in 2014 and 2015 and Matt Phillips, former World Junior and E3 Champion, have all been success stories from the AORC and we are proud to continue to work with organisers to bring a high quality championship to Australian off road riders,” Howard continues.

“We are also looking at several ways to streamline the championship and make it a better experience for the rider. As the series progresses we hope to improve the continuity between the rounds to ensure each and every round is as good as it can be. We are also looking into increase rider safety with more medical staff on hand, improving the scoring and also providing more information to riders and media.

“There is a lot of work to do but everyone is pulling in the same direction.”

On track Yamaha Motor Australia will be everywhere with riders competing in every championship class. The CDR Yamaha team will have Chris Hollis and Tom McCormack chasing outright and E2 honours on their WR450F’s.  Beau Ralston and Josh Green will represent the Active8 Yamaha team in E3 and E2 respectively while Australia’s fastest female, Tayla Jones will take on the men in E1 (250cc).

Also Yamaha Motor Australia supported will be Riley Graham, Scott Keegan and Stefan Granquist in E1, as well as Jemma Wilson, Jesse Gardiner and Emilie Karlsson in the Women’s class.

“We feel we have put together a very strong contingent of riders to compete at the AORC and all of them will represent Yamaha well throughout these events,” Howard ends.

02/11/2015 Damien Ashenhurst NEWS Comments Off on Supercross Results: Round Three