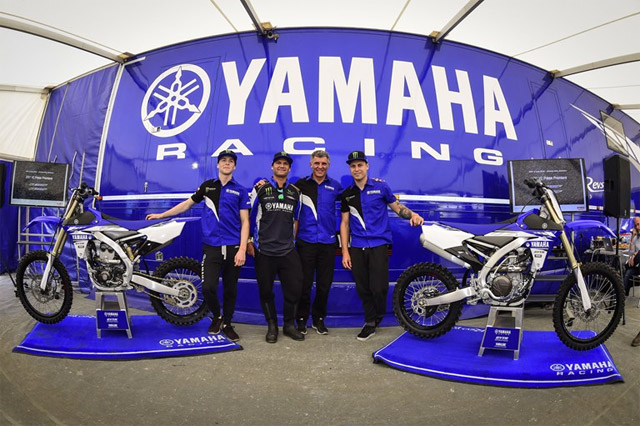 Yamaha Motor Europe MX Racing Manager, Alberto Barozzi introduced the 2017 models and outlined the YZ engineering at the heart of Yamaha’s off-road range. “We are happy and very proud with what Yamaha can offer through the YZs for the 2017 collection,” announced Barozzi.

“For the 2017 model year the YZ250F benefits from a range of important technical changes, such as an all-new reverse cylinder head aimed at increased performance and enhanced rideability. Major enhancements to intake and exhaust efficiency mean that the 2017 specification engine delivers a significant increase in race-winning performance,” he added.

“The YZ250F chassis and suspension have also been upgraded for 2017. Newly balanced frame rigidity, a lower centre of gravity, and a new, stiffer front-fork outer tube design lets us fine tune the frame to get the full benefit of the increased engine performance.”

“The lightweight handling and instant hit of power in the YZ250 and YZ125 two-strokes underline Yamaha’s total commitment to all dirt bike riders,” he added. “Two-stroke fans love these models for their ease of maintenance and unique character, and the many of today’s champions started their careers on the YZ85.”

“The YZ450FM built under me is a champion off-road machine, and YZ engineering gives the team maximum flexibility to adapt the mapping and power over a season of racing and testing,” Febvre said. “For a factory rider the adaptations to the showroom model are all about winning the start and holding speed until the finish. The YZ450F comes out of the factory at the highest possible level and with the maximum flexibility in race engineering to be ready for the gate drop in MXGP,” Febvre commented.

American AMA Supercross superstar Reed was present alongside Febvre to share his thoughts on the YZ250F.

“I used the production YZ250F in 2001 and was winning races on it,” Reed said. “Much has changed since then, but in 2017 the key improvements are better acceleration, increased pulling power in the mid to high rpm range, a smoother clutch feeling and refined suspension and handling to enhance stability and control.”

We head to Washington D.C for the launch of Husqvarna’s 2016 motocross range and then back it up with a day of riding the new machines at the legendary Budds Creek MX circuit. […]

Raceline Pirelli Gear up for Shepparton

Dylan Wills and Wade Kirkland are expecting a strong showing this weekend. […]