The third annual WR250R rally is aiming to set an unofficial world record. The first event saw 38 owners, the second 64 and now Greg Yager and the RideADV team are aiming to have the biggest collection of WR250Rs in one location.

“To be honest we have no idea what the world record number of WR250Rs is so if anyone knows, please get in touch. Otherwise we’ll be claiming this as a world record…” jokes rally organiser Yager. This year’s event will once again be hosted by dirt bike legend Chris Watson of Chris Watson’s Motorcycles in Cessnock, NSW on 22 to 24 March.

The Rally covers prime trails around the Hunter region including the Watagan, Olney and Yengo State Forests. Prizes are awarded for a number of categories including best bike and furthest travelled. Now in its third year, the event attracts a wide range of riders from teenagers to octogenarians and of both sexes. 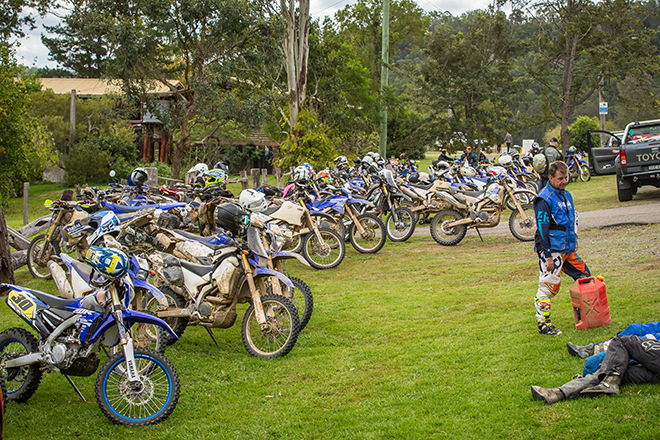 Why the WR250R?
The WR250R Rally is the brainchild of Greg Yager from Ride ADV and ADVWorx in Dural, NSW. After experiencing the capability of the small bore adventure bike on a double Simpson desert crossing and a number of other adventures, Yager started preparing bikes for his customers. “People tend to underestimate the WR250R. When they join a Ride ADV adventure and see how hard they go is when they change their minds. We now have a really good ADV setup dialled in for the bike with our partners Adventure Moto, Pirelli, Barkbusters and Teknik suspension,” explains Yager. “We’ve clocked up over 350,000kms on these bikes and have never had an issue with any of them. One of our WR250Rs has 57,000kms on it, including seven Simpson crossings and we haven’t even had to adjust the valves. It’s still running the original spark plug,” says Yager. “These bikes can take an unbelievable amount of abuse, I’ve never come across such a reliable machine of any capacity,” he continues.

There is still time to enter: HERE