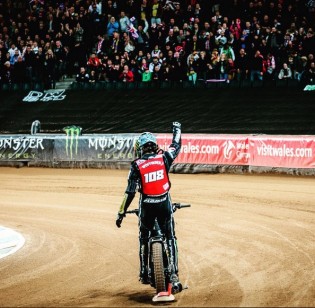 Despite missing out on the semi-finals, Woffinden was able to clinch the title with a round to go, after his closest rival Greg Hancock also failed to reach the final races. The 25 year old is the 16th rider in the history of the sport to win the title multiple times joining fellow countrymen Freddie Williams and Peter Craven.

“I have worked hard this season and it paid off.” Woffinden enthused. “I made a pretty big mistake in 2014. I didn’t do what I needed to do and I needed that to level me a bit so that I could start again this year.

“After the last three years, I think I’ve proved I’m one of those riders who is going to be at the top for a long time. I’ll just get my head down, focus and see how many titles we can get.

“I said before the meeting that I’d like to wrap it up in Torun. It didn’t happen the way I wanted it to. I would have liked to score the points to win it. It’s not really ideal to watch someone come last in a race for me to win the championship. But hey, that’s the way it is.

“I said to Greg when I gave him the trophy last year, ‘don’t get too comfortable because you’re giving me that back next year!’ That’s exactly what happened and we’ll see what happens in 2016.

“I want to say a massive thank you to my engine tuner Peter Johns, Monster Energy and all my sponsors, and my team mostly. I have the best mechanics in the world. They work so hard and we have proved that over the last three years.”

Doyle finished runner-up in the final behind three time world champion Nicki Pederson and his late season form has been timed perfectly heading into his home GP.

“I’ve kept telling people I needed to get this monkey off my back with the semi-finals and finally make a final. To make a final and come second in my first year is an unreal experience. I’m over the moon with second. It’s like a win for me. What a night!” Doyle commented.

“To top the season off in Melbourne is great. I can’t wait to ride in front of my family, friends and the Australian public. It’ll be a memory never to forget.

“My main goal this year was to make the top eight and we are still going in the right direction. Hopefully I’m secure in there now and can go to Melbourne with no pressure.”
Following his finals result, Doyle will head to Melbourne in fifth place overall another indication of his fantastic late season form.

6D Helmets are continually creating amazing designs and this colourway release is a prime example of the quality product they produce. These select 6D Helmets, Pilot Orange and Yellow LE colourways are limited and will sell fast, get to your closest retailer and order yours today. […]

The reigning MX2 champion will return to racing this weekend following a seven week stint on the sideline through injury. […]

Video: Onboard with Stewart, Seely and Oldenburg

03/02/2016 Ashley Diterlizzi NEWS Comments Off on Video: Onboard with Stewart, Seely and Oldenburg

Strap yourself in for some hot laps around the Oakland track. […]