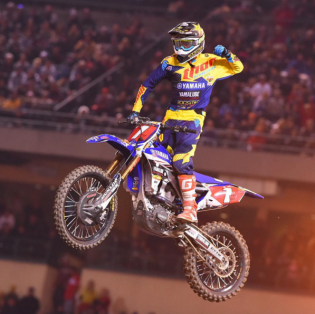 The Yamalube/Star Racing Yamaha rider had an impressive first outing for 2016 claiming the seventh win of his career in front of a sold out Angel Stadium.

The main event holeshot was taken by Troy Lee Designs/Go Pro/Red Bull/KTM’s Jessy Nelson. Pulling ahead of the pack Nelson looked impressive before Webb started to show striking speed making easy work of the field. Moving into second place Webb had eyes only for Nelson and the Yamaha rider made his killer blow on the tenth lap.

Webb remained unchallenged for the remainder of the race laying early claims to the possibility of back to back 250 West SX championships.

“It’s awesome to start the season like this,” said Webb. “I don’t like to lose so this really makes tonight great. I was patient and pulled it off. I’m look forward to next weekend in San Diego.”

Nelson was able to hold on to second place with Zach Osborne finishing in third. Australian talent Hayden Melross has an outstanding night in his AMA Supercross debut, qualifying in 22nd position before finishing the main in 11th place.

Fellow Australian riders Jackson Richardson and Geran Stapleton had a difficult night both crashing out of contention in their heat races. While Richardson was able to regather himself and qualify for the main event through the LCQ, another fateful blow left him crashing out on lap five.

Round two of the 2016 championship will see riders head to San Diego on Saturday January 16.

Ryan Dungey has once again topped the 450SX main after leading start to finish in Oakland. […]

Round four of the 2015 Australian Supercross Championship will deliver a new Jimboomba X track. […]

Extreme Enduro Racer Jonny Walker has claimed another 2015 victory adding the Red Bull 111 Megawatt to his list of achievements. […]