Mackenzie takes the win while Moss extends his lead 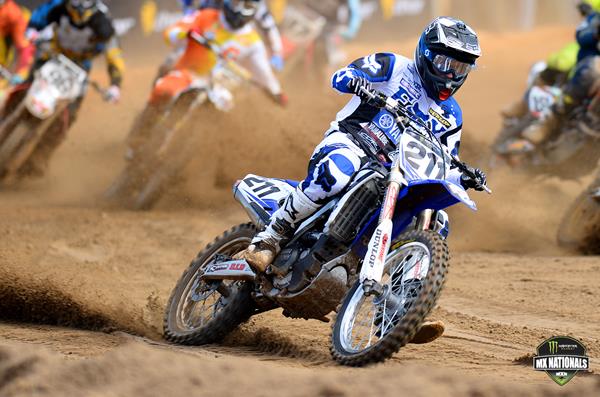 CDR Yamaha rider Billy Mackenzie has claimed the overall round win in the Monster MX1 class, at the fifth round of the 2014 Monster Energy MX Nationals.

After rain and wind threatened to make the Wanneroo round in Western Australia a particularly tricky event, the weather held out and a huge crowd gathered to watch the country’s best riders tackle the sandy track. And it was Mackenzie’s consistency (first, second and fourth from his three races) that handed him his first overall win for the year. Series leader Matt Moss (Team Motul Suzuki) and his brother Jake Moss (National Pump Monster Energy Kawasaki) finished the event in second and third overall respectively – each claiming important points in the overall series as it hit the halfway point. KTM Motocross Race Team’s Kirk Gibbs and National Pump Monster Energy Kawasaki’s Jake Moss finished in fourth and fifth overall.

In the opening moto, Mackenzie took the holeshot and raced to the lead from Matt Moss, Jake Moss, Ben Townley (Penrite Honda Racing) and Gibbs. The group seemed to have settled into the top five, but on the final corner of the opening lap Jake Moss lost control of his bike and went down, forcing him back into 10th. Mackenzie and Moss then proceeded to put a huge gap on the rest of the field, with Townley and Gibbs putting a break between themselves and fifth placed Kade Mosig (DPH Motorsport).

In what ended up being a 13-lap moto, it was the middle of the race that provided the most action. On the fifth lap, Moss passed Mackenzie to get into first spot, Gibbs passed Townley to move into third and Jake Moss had clawed back into fifth spot. However on the sixth lap, both Moss brothers ran into trouble – first Jake came off after trying to pass Gibbs and Townley, and them Matt came down forcing him into second and a long way off the leader. In the end Mackenzie held on for the win with Matt Moss in second, Townley grabbing third, and Gibbs and Adam Monea in fourth and fifth respectively.

In the second MX1 moto, Mackenzie took the holeshot before Jake Moss whizzed past him to take the lead. As the riders settled into position over the opening lap, it was Moss leading the way from Mackenzie, Monea, Gibbs, Matt Moss and Townley. Jake Moss and Mackenzie pulled away from the rest of the field, and finished the race comfortably in first and second positions. There was not much movement in the second race – Matt Moss dropped back to seventh before climbing back into fourth spot within two laps.

The reigning champion pushed hard at the finish line to edge past Monea but he was held out, meaning Monea took the podium finish in third with Moss having to settle for fourth. Gibbs rounded out the top-five ahead of Mosig, while Townley drifted back into ninth by the time the chequered flag was waved.

In the third and final moto, Mackenzie grabbed the holeshot but relinquished the lead soon after to both of the Moss brothers. Series contender Monea went down at the third turn and was pushed back towards the rear of the field, as Jake and Matt Moss took a stranglehold on the race. They finished the race in first and second place while Gibbs passed Mackenzie on the third lap and finished the race in third. Mackenzie ended the race in fourth while privateer Jacob Wright claimed fifth spot. Monea did well to ride through the field, and in passing three riders on the last lap of the race, ended the moto in eighth.

In the overall championship standings, Matt Moss has moved 22 points clear of his closest rival Gibbs, While Jake Moss has leapt into third place outright.

The series now takes a five-week break before round six, which takes place on 29 June in Swan Hill, Victoria.

Courtney Duncan on her opening round clean sweep. […]