Triumphs Tiger 800XCx might be outgunned by the big rigs but it doesn’t take a backwards step.

I haven’t had much experience riding a Triumph. Up till this test day I’d ridden two. One was a Tiger and the other a Bonneville so it’s fair to say that while I’ve spent countless hours on most other makes the whole Triumph thing is quite new to me.

The Triumph range of adventure bikes is a big one and recently received a host of updates to keep it competitive in a bustling market. We were offered the chance to take out the Tiger 800XCx which is the smallest capacity Tiger and well hell why wouldn’t we? On a brilliant sunny day we headed off into the distance in search of quality dirt and to get to know the Triumph.

The Tiger 800 XCx has a somewhat familiar look with the ubiquitous adventure beak and the trellis frame but the designers have done a nice job with the minimal plastics that cut aggressive lines with the tank the only clear point of colour amongst the black and grey. At first sight the tank seems to sit high and un-gamely but in fact this is an immediately comfortable bike with a great seat, a decent amount of room in that footpeg to ‘bars to seat triangle, and a good set of handlebars to finish that off. There wasn’t a single thing I longed to change or adjust when I first got on the bike and so we just hit the go-button and left.

The engine is a satisfyingly even 800CC that offers no vibration through the chassis at all. The first thing I noticed was how light the cable clutch was and how smooth the ride was. Now we were still on the road at that point but as a baseline gauge the Triumph felt quite refined a fact no doubt aided by the fact the bike was running dual sport Bridgestone Battle Wings which are not my go-to tyre but they are a nice break from the more aggressive knobby tyre I’m used to when on the black top. The exhaust note is quite but deep and admirable and we pointed our bars to the hills to get free of traffic lights and texting P platers and closer to kamikaze wallabies. 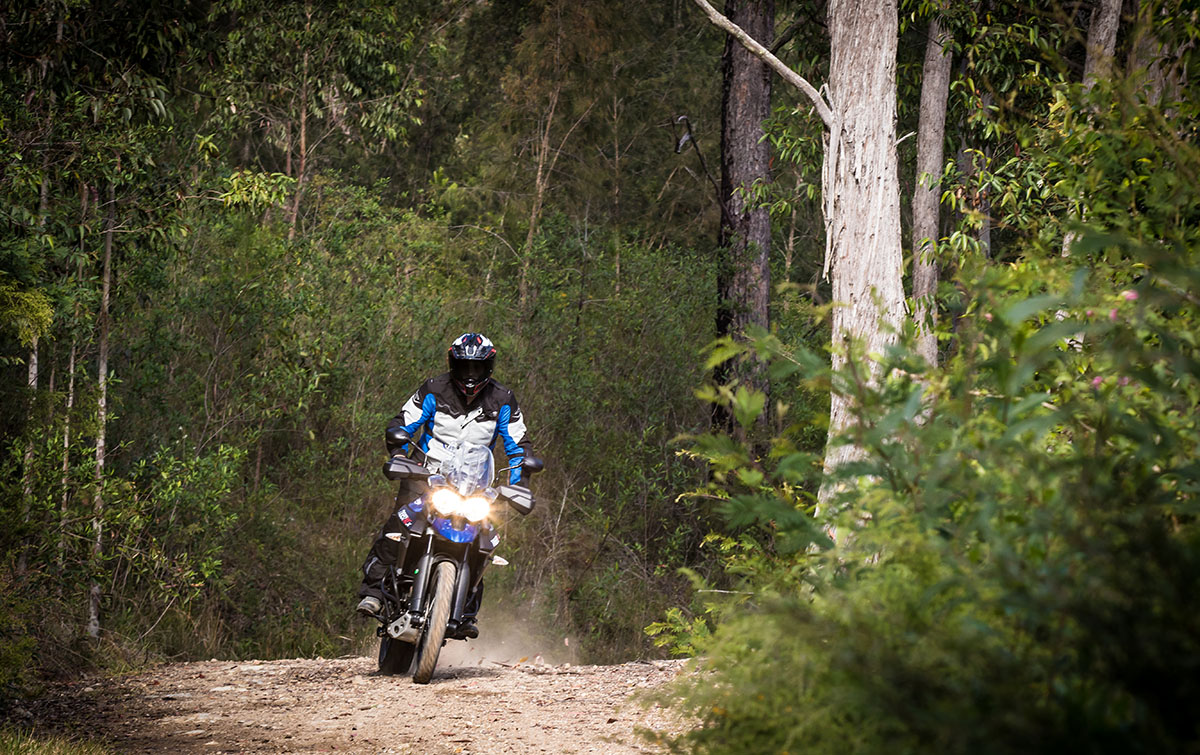 Without a crash course in the electronics I found myself hitting the dirt with little idea on how to change riding modes. I could see on the dash that the bike was in Road mode and I was hoping an Offroad mode could give me something a little extra. The Road mode is spot-on for the transit to the dirt but it’s lacklustre when the road ends and rear wheel steering comes into play. However it wasn’t immediately obvious how I would go about changing modes. The interface via the half digital and half analogue display is a bit clumsy in the face of the competition and while I eventually found the mode I was looking for I went passed a few settings that made no sense to me. Of course if you buy the bike you get the manual so this isn’t a drama, but I think KTM and BMW are leading the way with intuitive displays that encourage you to use the electronics more often and to your benefit without memorizing pages of info.

Once in Offroad mode the bike became a very different beast. It truly came a live to a degree that took me by surprise. I was thinking this was a nice bike, but a little boring to be honest and then boom; we found the happy place. With a claimed 95Hp the Tiger XCx is putting out close to KTM’s 1090 R in Offroad mode (100Hp) and slightly more than Honda’s Africa Twin (94Hp) although both the KTM and Honda run 200cc larger engines. It’s considerably down on torque to those two bikes but its lighter and these are impressive numbers from an 800 that translate into a lot of fun and usable power on the tracks.

This is the point I really started to gel with the Tiger. At a claimed dry weight of 196 kilograms it’s not as alight as its natural competitor, the BMW F800GS, but the Triumph feels confident on the dirt and I felt I could push it passed what the Beemer’s ridiculously soft fork would allow.

The Triumph allows you to turn off traction control and ABS (to the rear wheel), but as I’m frequently finding the baseline traction control settings make the bigger bikes easier to ride more often than it being a hindrance and that was no different here. The bike can still slide and you can steer with the back but the huge step-outs are kept in check. I didn’t get a chance to really explore the electronics which is a shame as I understand the current package is very good, but just pushing buttons to see what would happen doesn’t lead to a real productive day. Hopefully at some point in the future we can get some more time on the Triumphs and a bit of an expert run-through on the clever stuff. 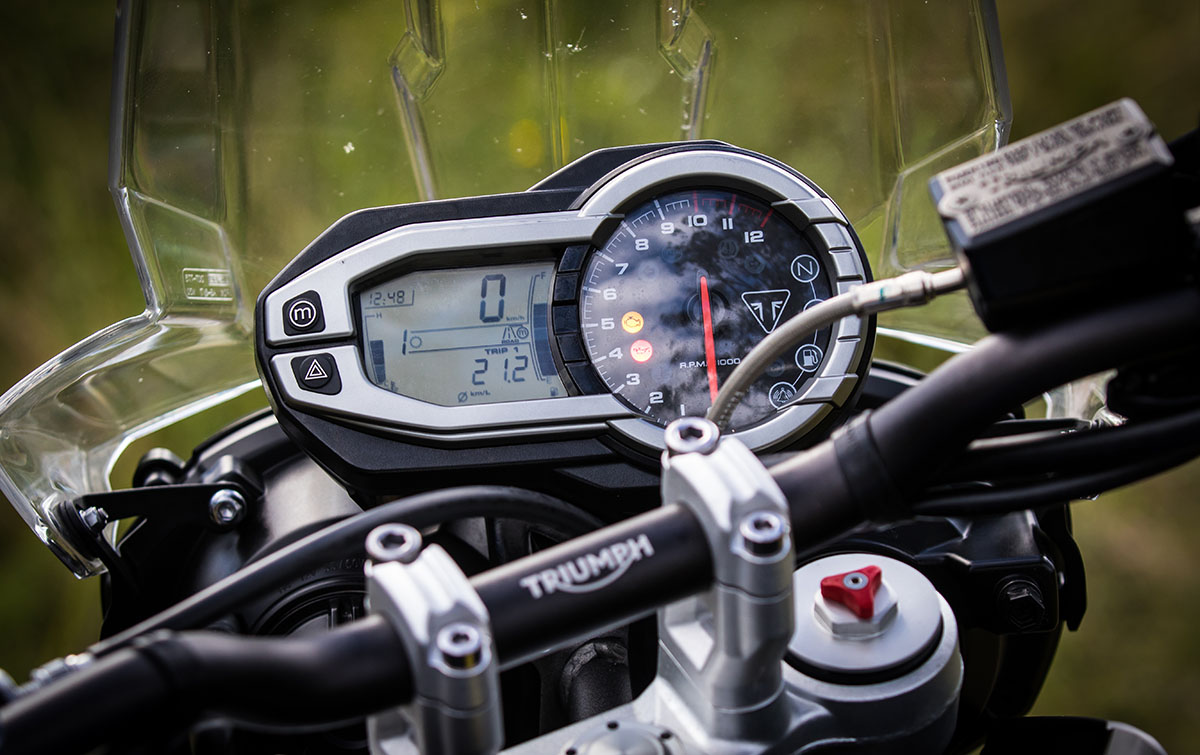 The front end feels very different to any other manufacturers’ which is something I do remember from my last time on a Triumph. It’s a quite a quick steering bike and he tend to sit right up the front which is unlike the BMW and KTM and somewhat similar on the Africa Twin. This can be a little disconcerting on the softer terrain but thanks to the generous footpegs and ergos that allow to move about freely, you can counter that by getting right back. Again, the tyres weren’t a huge help in this department. Both the fork and shock are WP which is good news for anyone looking to get more aggressive on the trails.

The shock is excellent and all day it felt planted at speed and confident with cornering, even on a particular nasty, rocky hill we ran a few times. The bike is chain driven so you get a bit of noise and chatter but the weight saving for an 800 over a shaft drive is enough to justify to decision, let alone the unmolested power that a shaft would otherwise gobble-up. 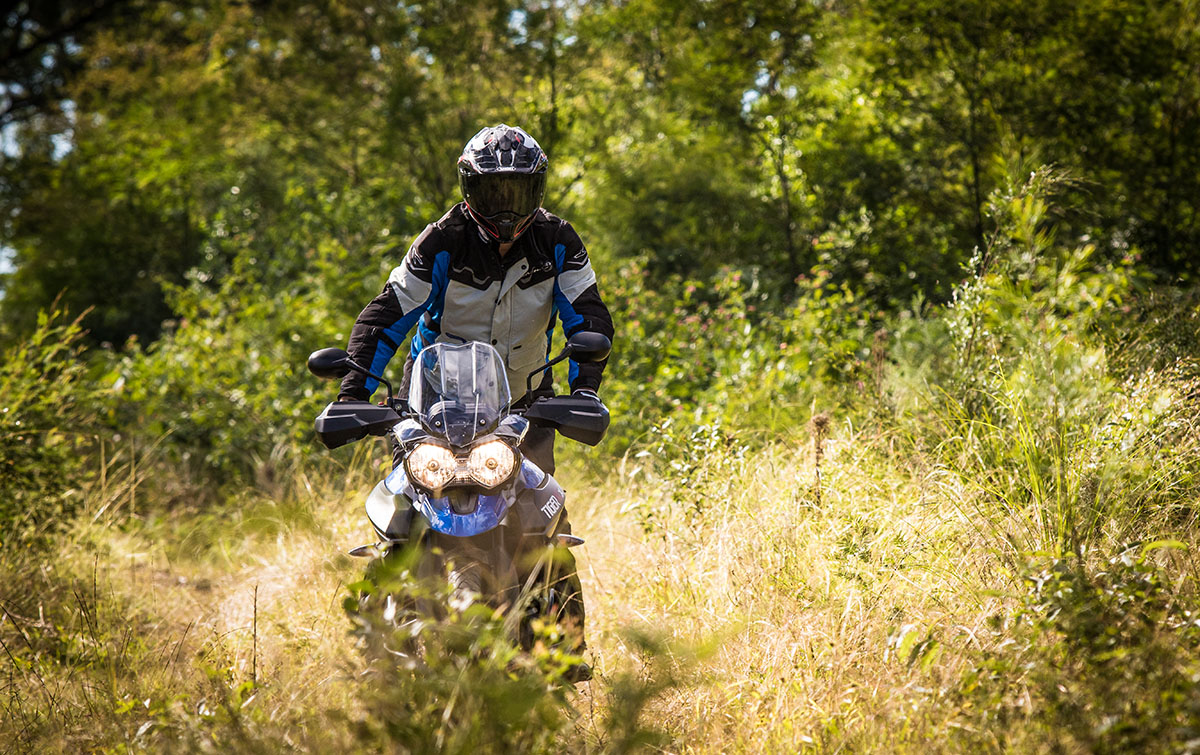 All told Triumph has a great bike occupying a spot in the market we love which is the 800-1000cc range. The engine is without a doubt the standout but the build quality from end-to-end looks brilliant. Our unfamiliarity with the electronics was the only hindrance to getting a full grasp on its capabilities and I’ll reiterate that the non-intuitive nature of the display and controls doesn’t help things there.

But this is a fine and refined bike that begs to be ridden into the distance. It has the chops to handle nasty stuff but the manners to present a more decent face when needed. An outstanding clutch feel, great breaks, cruise control, a descent windshield and good ergos help to make the bike a pleasure to be on all day and we’d be keen to point it something a few days away and just disappear into the distance. Until next time…

For more information on Triumph, head to www.triumphmotorcycles.com.au

STORY MATT BERNARD PHOTOGRAPHY KATRINA BERNARD So many people head straight for the 450 in the local dealership when they may be more suited to a bike such as the WR250R. The Yamaha WR250R has blasted […]