When there’s no trail to follow, it’s good to have the skills to make your own!

STORY AND PICS BY ADAM RIEMANN

Whether it’s a fallen tree blocking the trail, a sketchy river crossing or a seemingly impassable rock section, I like to have a go at conquering an obstacle before seeking out an alternate path. Sometimes obstacles aren’t as gnarly as they look and can make riders feel they’ve reached a dead end. Well, there’s always more to discover on the other side, so it’s worth facing up to the challenge and giving it a go. When you’re riding with someone of Chris Hollis’ calibre, there’s often little hesitation or any scoping of obstacles — you have to hit things on the fly like it was always part of the course. Here’s a look at how a pro operates when charging through the bush. 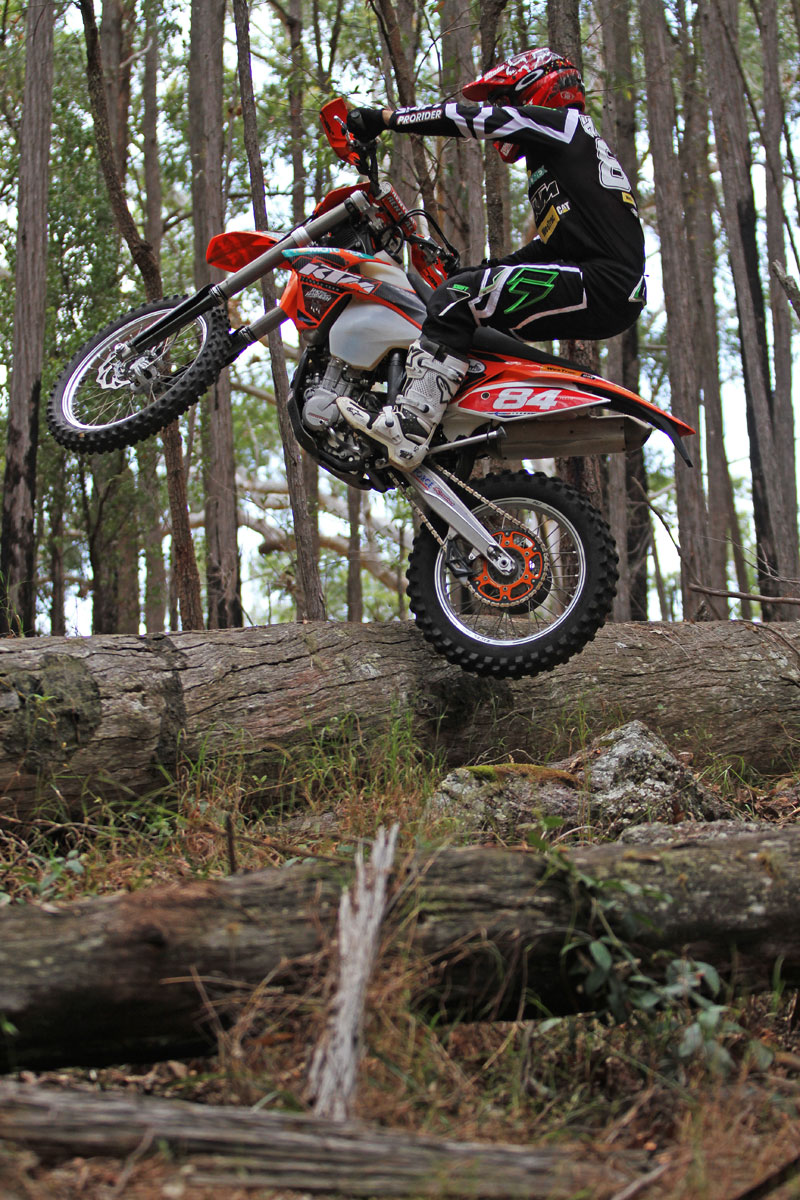 This tricky hillside trail has been made more difficult by a fallen tree, which completely blocks the path. If Hollis were in an enduro special test, he’s at risk of losing a lot of time if he deflects off it badly and crashes on the other side, or simply goofs it up by casing the frame and stalling his momentum — especially if it’s wet. Without hesitation, Hollis has picked a line towards a conveniently situated rock to launch the front wheel clear of the sloped log. He’s already saved energy by not having to wheelie the bike, but also removed the risk of the front wheel deflecting from the angled log. But, he’s not in the clear yet. 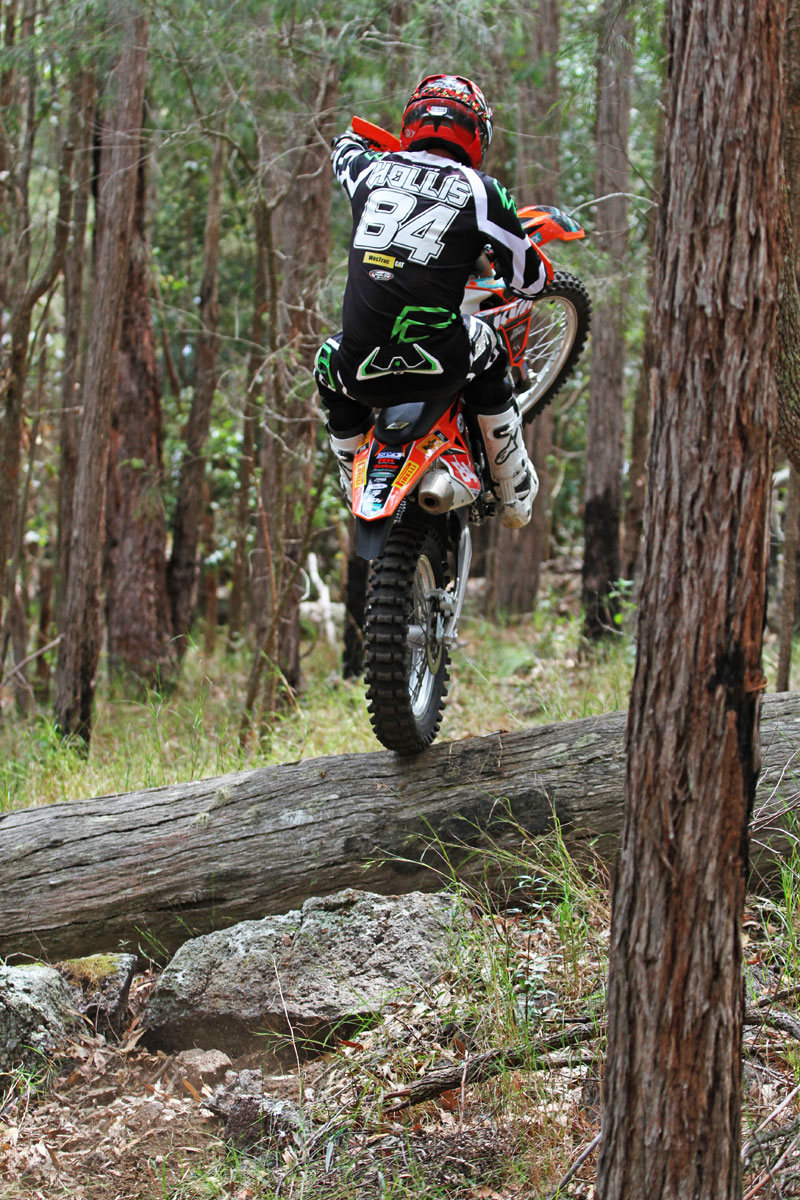 With the trajectory of his bike set high from launching the rock, his rear wheel can do two things if he gets it wrong; too much throttle can further boost the bike as the tyre grips the log and cause him to land vertical, potentially sliding him off the back like a punter displaying massive amounts of whiskey throttle. Secondly, if the log is wet, too much or too little throttle will cause the back end to be spat sideways, which can potentially pitch him over the high-side when landing. The trick here is a careful combination of trailing throttle and off-loading your bodyweight from the suspension. In one motion, Hollis is letting the bike float up beneath him, counter steering to stay balanced and just feathering the throttle to let the rear wheel clamber over the log without breaking traction. 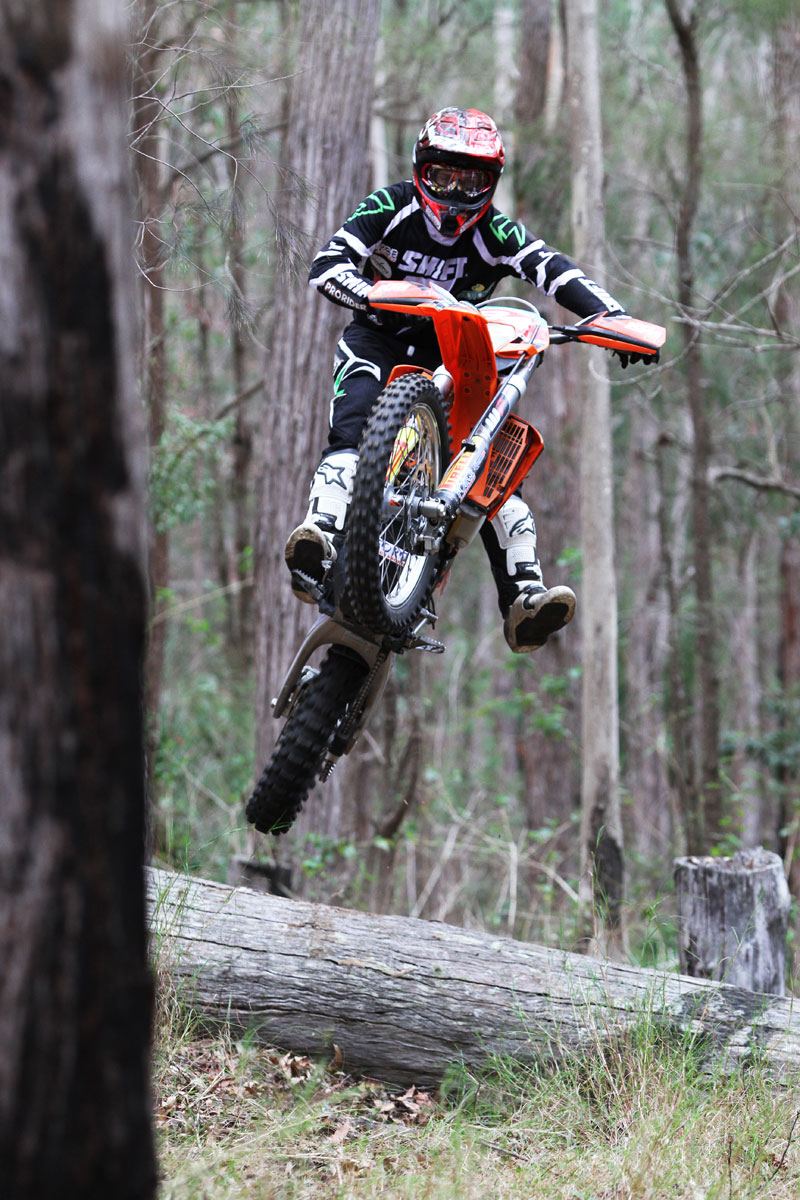 Clearing a gnarly obstacle with speed and momentum is pointless if you land off track and punt straight into a bush or tree. Here you can see Hollis has boosted off the obstacle with heaps of momentum, though he’s already plotted where he wants to land by looking well beyond the obstacle before he even hit it. He’s already prepared himself to tip his weight and skew the bike in the air, bringing it back on track and avoiding the tree awaiting him on landing. This is obviously a more advanced skill, but the fact he’s perfected his technique of launching the obstacle in the first place allows him to stay in control and land the bike exactly where he needs it to be. These are skills you can only truly appreciate when watching riders like Hollis, Price, Milner and Phillips do battle for outright on the gnarly sprint tracks of the Australian Off-Road Championships (AORC).