The Slovenian rider missed the Motocross of Nations through injury but will be back on the bike for next weekend’s event. 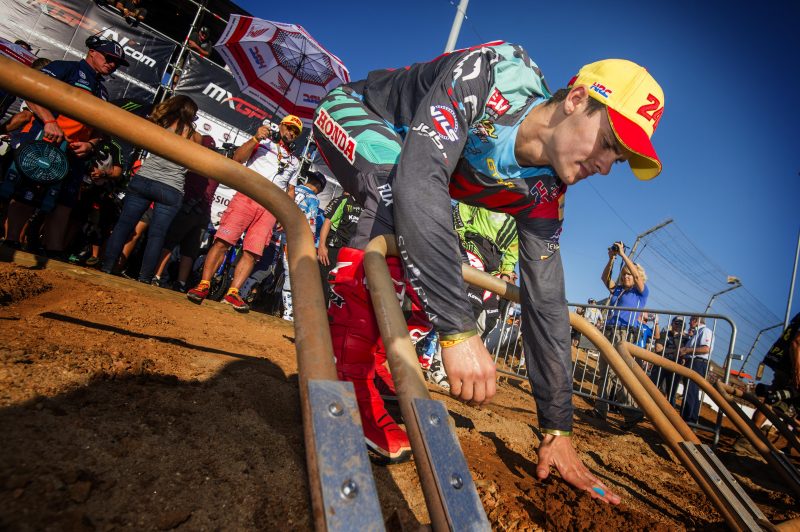 Gajser was set to lineup for his country last weekend before a practice crash left him with bad bruising and damage to the muscles in his shoulder and hip. Medical staff advised Gajser to shift his focus to the SMX and Monster Energy Cup rather than place any more stress on his injuries at Maggiora.

“We were speaking in Glen Helen about testing the new bike before Maggiora, and with Honda and HRC we worked together to make the test happen in Slovenia on my track last week. I really like the new bike and the test on Wednesday was going well and we’d decided that I was going to race it at the MX of Nations. But then in the whoops I made a little mistake and got sideways and crashed. Actually the crash wasn’t so big, but I hit the ground really hard with the whole right side of my body.

“I had a lot of bad bruising and some damage to the muscles in my shoulder and my hip. Because of that, we received medical advice that we couldn’t go to Maggiora in order to try and be ready instead to come back for SMX and Monster Cup because they were the main goals.

“It was a tough decision to have to miss the Nations, but in the end I think we made the right choice because in the week since the crash already I’ve had some rest and my body is starting to recover. This week I’ve started cycling again and working back towards fitness for SMX. Because a lot of the injury was muscular I think I will still feel some pain there next weekend, but I’m sure it will be ok.

“So I’m very happy to confirm that I will compete at SMX and at the Monster Cup, and I will ride the 2017 Honda CRF at both events too, so I’m very excited to get behind the gate again!”

KTM Australia have announced they will expand to two classes for the 2016 season, with Caleb Ward signing on to compete in the MX2 category. […]