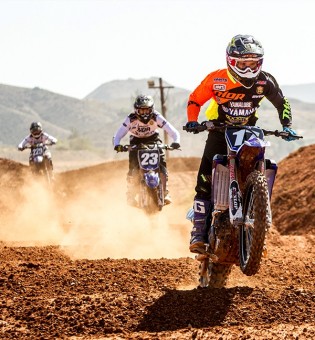 “Yamalube Star Racing Yamaha is aiming high for the 2016 season. We are pleased to be working with Thor and confident that our collaboration with them will lead to great success,” said team manager Brad Hoffman.

The Yamalube Star Racing Yamaha Team looks to be a very serious nationwide threat with racers competing in both the East and West coasts in the AMA Supercross series and then heading outdoors to defend their AMA 250 Motocross Title.

“Signing the Yamalube Star Racing Team is an exciting new change for us,” said Thor MX.

“They are a young talented team that has become a powerhouse in the 250 class, winning two titles last season. We can’t wait to see what this team has in store for the upcoming seasons, and we’re excited to be involved.”

The Yamalube Star Racing Yamaha Team will make their Thor MX debut in Italy at the Genoa Supercross on November 7th.

Newly crowned Australian Solo champion, 19-year-old Brady Kurtz, from Cowra in New South Wales, returns to Adelaide’s Gillman Speedway this Saturday night hoping to achieve a rare feat in Australian speedway, that of being the Australian champion and the Australian Under 21 champion at the same time. […]

Trey Canard and Cole Seely are set to represent Team Honda HRC in 2016. […]