Monster Energy/Pro Circuit/Kawasaki’s Joey Savatgy has won the first 250SX race of his career to move into the overall championship lead. 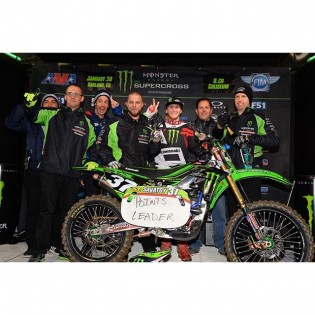 As gates dropped on the main event Christian Craig scored the holeshot looking to follow on from his impressive outing in Anaheim last weekend. Following closely behind was Yamaha’s Cooper Webb and Savatgy in third. Craig managed to hold the lead for the best of three laps before a crash handed competition front runner Webb the lead.

Looking for four straight wins Webb looked strong out front before an unthinkable mechanical issue forced him to pull off the track. He was able to eventually return finishing the race in 21st to score some vital championship points.

Savatgy enjoyed the spoils of Webb’s mishap to claim victory. The misfortune also handed Joey the overall championship lead ensuring the competition will remain tight for the next few rounds.

“To be on the podium and have the points lead going into our first-ever race in Glendale, Arizona next weekend is awesome,” said Savatgy.

In second place Colt Nichols enjoyed the best finish of his career while Craig scored his second career podium in as many weeks.

“I almost got choked up when I came of the track,” said Nichols. “I have been envisioning this my entire life, and to be up here is a dream come true.”

It was a devastating night for fellow Australian and new MAD Racing Dirt Candy Suzuki recruit Luke Clout. After inking a new two year deal with the team following a strong debut in Anaheim, Clout came crashing down in qualifying breaking his femur and putting a huge dampener on his US experience.

@scotched99 just posted this on Instagram following Davi Millsaps announcing that he had parted ways with Rockstar Energy KTM. […]