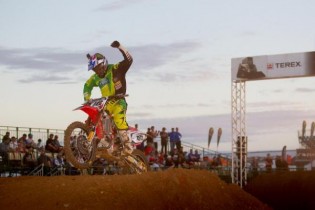 Peick won the 20-lap Pro Open final ahead of Hart & Huntington/Insure My Ride/DPH Motorsports Suzuki rider Josh Hill and Kawasaki’s Brett Metcalfe, who was competing in his first event on Australian soil in seven years.

Peick was mid pack off the start, but worked his way to the front in the early stages of the race, lapping consistently to take the win.

“I had a great day,” Peick said. “The morning was a bit rough, we were trying to find traction and get the bike setup but it really came together for the main.

“The track started to deteriorate quite a bit so I tried to keep it as smooth as possible and being consistent paid off.

“It has been a good day I got the team on the top spot of the podium. We will run with the same game plan tomorrow,” Peick added.

“It was a crazy race tonight, the sun was just setting right when we went out and vision was real tough,” Hill explained.

“Everyone was having to be slightly cautious and the guys that weren’t didn’t have very good races.

“I started out in fourth and then tried to make a pass on Jay Marmont and clipped his rear tyre and just about fell over so I had to start my charge again,” he continued.

In the Pro Open class, Faith holeshot the final and led from start to finish, taking the victory ahead of Raceline Suzuki rider Ryan Marmont and Serco Yamaha rider Luke Styke.

Styke, who rode a brave final, nursed a shoulder injury through out the 15-lap race. The Yamaha rider maintains the Pro Lites championship lead with just two points separating him and race winner Gavin Faith.

“It was a good first night here at Phillip Island,” Faith said. “I holeshot both the heat and the main and I think that was the difference tonight.

“Getting out at the start meant I could ride my own race out front and this was crucial with the dusty conditions and sun in your eyes.

“We will move forward to tomorrow and see if we can do the same thing,” he added.

Top Ten Pro Lites Championship Standings – (After Round 4 of 6)

Jeffrey Herlings was able to make it a fairytale weekend by winning his first MXGP title at his home track in the Netherlands. Herlings won his 16th grand prix for the year and had the […]

KTM’s KING OF THE DESERT BEGINS HIS DAKAR BUILD-UP

KTM Australia’s King of the Desert Ben Grabham has already commenced the lead-in to his 2014 Dakar Rally effort, and this weekend he will face the starter for the sixth and final round of the FIM Cross-Country Rallies World Championship. […]

Made in Italy, the R15 Worx Bike Stand surpasses all other standards of bike stands that are on the market today. […]