Wildcard Husqvarna rider Nathan Crawford stunned all onlookers at the sixth round of the 2014 Monster Energy MX Nationals at Swan Hill, taking the outright honours in the Monster MX1 class. 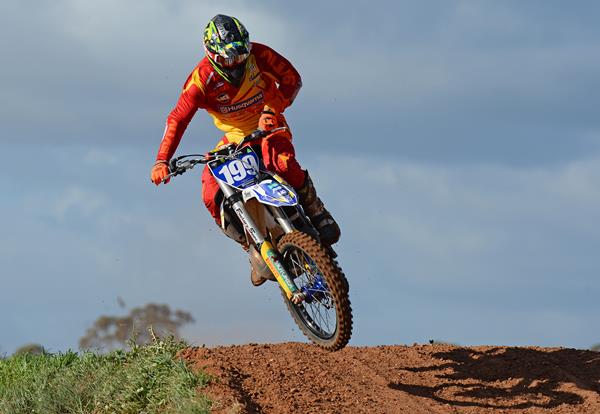 Crawford, who has been riding in the MXD class at selected rounds of the series, was given a wildcard entry into the MX1 class and grasped the opportunity with both hands. After claiming second place in the opening moto of the day, the 16 year old rode the perfect race in moto 2, to take the race win and with it the round win ahead of Luke Arbon (SD3 Husqvarna) and Luke Clout (Serco Yamaha). It is the first time that a 16 year old has stepped into the class and won the overall round since Troy Carroll did it in 1996.

The opening MX2 race for the round was fiercely contested, with a number of riders looking to put a dent into series front-runner Clout’s lead. Serco Yamaha rider Jay Wilson managed to get the holeshot, ahead of Arbon and Serco teammate Clout. Round five winner Caleb Ward had an issue on the opening lap of the race and finished the first lap a fair way behind in last place. There were a number of changes to the lead throughout the race with Wilson unable to maintain his early momentum, and he slowly drifted back through the pack as the race progressed (he finished in eighth). Clout found himself with a share of the lead 11 laps into the race, but just two laps later he went down before resuming back in fourth place.

Husqvarna and wildcard rider Egan Mastin was hovering around the top-four for much of the race but registered a DNF after withdrawing from the race on the lap 11. With riders struggling to take advantage of the friendly Swan Hill conditions, it was Arbon who flew into the lead and gained the full 35 points on offer. Crawford built on a solid start, progressing from seventh place early to finish in second.  The youngster is establishing himself as a real star of the future in the Australian motocross scene. Third place went to CMR KTM Redbull Motorex rider Hamish Harwood, with Clout finishing in fourth and privateer Errol Willis finishing fifth. Ward did well to finish in a respectable 16th.

In the second race of the day, Crawford got out to a strong early lead ahead of Willis, Arbon, Clout and Wilson. It wasn’t long before Arbon moved into second position – and despite his best efforts to challenge Crawford in the first half of the race, he had to settle for second place. Luke Clout passed Willis on the eighth lap of the race to move into third and claim a podium finish, while Wilson and Ward finished the moto in fourth and fifth respectively.

In the outright championship standings, Clout holds a 14 point lead ahead of Harwood with Arbon a further 10 points behind.

The series now heads to Conondale in Queensland for round seven, which takes place on 13 July.

FOR THE LOVE OF DIRT: MEGA PHOTO GALLERY

20/03/2015 Damien Ashenhurst NEWS Comments Off on FOR THE LOVE OF DIRT: MEGA PHOTO GALLERY

Check out our mega photo gallery: For the love of dirt. […]

A revolutionary track has been revealed ahead of the 2015 AUS-X Open set to take place in Sydney on November 28 and 29. […]

Our 2019 450 motocross shootout has been done and won. It was perhaps the closest year we’ve ever had in terms of picking a winner and but in the end there were two absolute standouts […]