Round two of the NSW Motocross Championships saw competitors make the journey to Dubbo in central NSW. 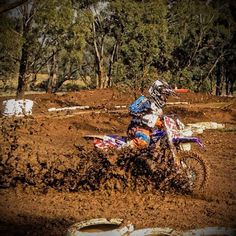 Racers arrived at the track on day one to a thick fog which eventually cleared to reveal a beautiful day, however, the damage to the track had been done with several heavy downpours of rain in the days leading up to the event. What ensued was a very tough track for two days of racing, that difficult that several of the smaller bike classes had to be cancelled from the event.

Dylan Heaton continued his impressive form across both days, winning all three motos in the 15yrs 125cc class aboard his YZ 125. Heaton dominated proceedings on his two-stroke and was in good form.

He backed it up with a win and a second place in the first two motos of the 15yrs 250cc class. Unfortunately, a part failure in the final moto meant Dylan was unable to finish the race and had to settle for fifth overall for the round. Dylan showed maturity beyond his years both on and off the track over the weekend, proving he is well on his way to developing into a future star of the sport.

Brendon Walther matched his older teammate in smarts and determination when dealing with the tough conditions. He managed a very respectable third place on his YZ 125 in the 13/U15 years’ 125cc 2stroke class. It was a great effort amongst plenty of older riders and his first podium at a state level on the bigger bike.

He came out swinging on day two aboard his YZ 85 and rode from a fifth place start through to the front in the first moto. Moto two saw Brenno face some bad luck when a fuel breather hose became blocked in the sticky clay and caused an intermittent miss during the race, he battled on to finish the moto in seventh. In the final moto Brendon charged through the pack to miss the race win by only half a second and bag a second overall for the round.

Former YJR racer Joel Wightman also had an impressive weekend on his YZ 250F wrapping up the overall win in the MXD class.

The third and final round of the series will be held at Mt Panorama on the 5th and 6th of July.

The Serco Yamaha Metal Mulisha duo of Kirk Gibbs and Luke Style kicked off their 2012 MX Nationals campaign in fine style taking a 1-3 result respectively in the MX2 class at the opening round of the championship held at Green Park, Conondale. […]

This weekend, Australia’s upcoming stars and possibly even future Junior World Champions will hit the track at Shepparton in Victoria. […]