Serco Motorsports and Yamaha Australia are proud to announce the retention of Luke Clout for the 2014 racing season for their factory MX2 team. 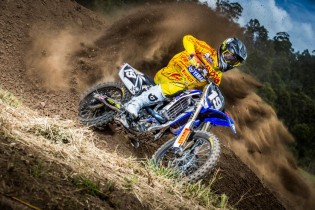 Clout, 19 years of age from Sydney, was a revelation in 2013 prior to his injury posting impressive results in the MX Nationals, highlighted with a round win at Murray Bridge, and running second in the MX2 championship before a training fall caused him to miss the remainder of the season with a broken leg.

“Serco Yamaha are the best team in the MX2 class and signing to race with them again in 2014 was a formality. Everyone in the team works hard and the bikes are amazing so there really was no decision, it was just a matter of signing the contract and now getting fit and ready for the season to begin.

“I’m also looking forward to racing the new 2014 Yamaha YZ250F. The bike is all new and the reports we are hearing is that it is an awesome bike. It’s an exciting time to be with Yamaha and Serco and I can’t wait for my leg to heal and get back on the track,” Clout said.

Yamaha and Serco Motorsport now enter their 12th year in motocross and are the official Yamaha MX2 team. Together, the association has led to several championships over the years and the signing of the young gun of Australian Motocross in Luke Clout continues to show the enthusiasm and commitment both Yamaha and Serco have towards racing.

“Luke is a dedicated and talented rider who is still on a steep learning curve,” states team owner, Gavin Eales. “We have been impressed with his professionalism and his work ethic in 2013 and only injury prevented him from more success.”

“We look forward to working with Luke again in 2014 and I’m sure we will see his development as a rider and a person continue to grow,” Eales ends.

Serco Yamaha will field a two rider team in 2014 with the second rider to be announced later in the season.

After showing good pace and form during practice at the 3rd round of the 2013 Terex Australian Supercross Championship at Mt Gambier, SA, Monster Energy Kawasaki rider Jay Marmont had to settle for an 8th place finish after crashing on the slick track that took many riders down. Team mate Adam Monea is still sidelined with a shoulder injury. […]