Australia’s most innovative bookmaker – Ladbrokes, have released the markets for this weekend’s AUS-X Open event in Sydney, where World Champions Ryan Villopoto and Chad Reed will do battle with some of the best supercross racers in the world. 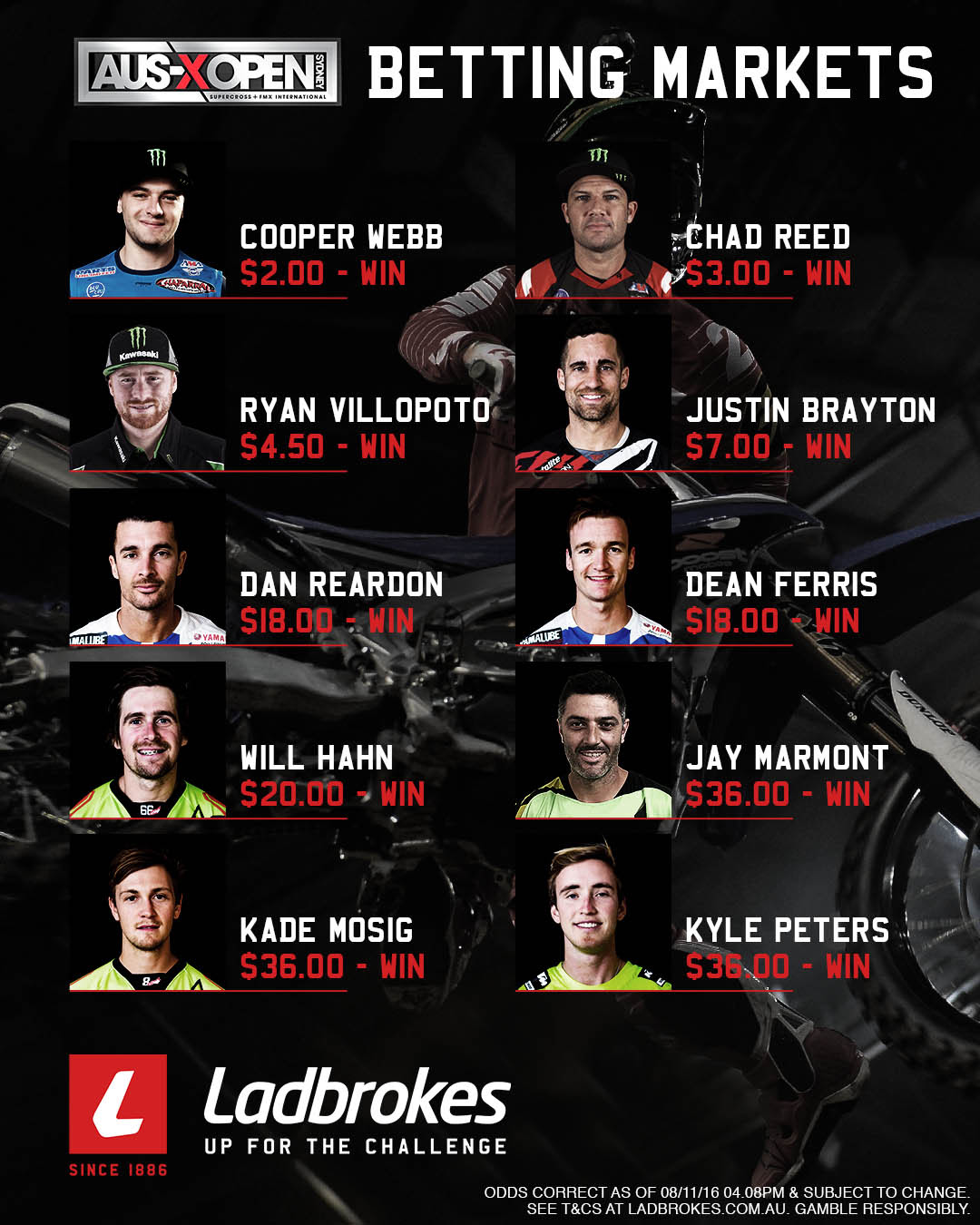 With a barrage of international talent racing the Australian Supercross Championship so far this year, American trio of Justin Brayton, Wil Hahn and Kyle Peters feature in the market, along with defending champion – Dan Reardon, and the best riders in Australia.

According to Ladbrokes bookies, 21-year-old American gun – Cooper Webb, is the odds-on-favourite* to take the win at just $2, with the rookie coming off an incredibly successful two years in the USA.

The introduction of betting on supercross racing is an Australian first, and something that Ladbrokes Head of Media – Roger Oldridge, is extremely excited to see roll out.

“Not only is Ladbrokes excited and proud to partner up with such an adrenaline fuelled event like the AUS-X Open but we are delighted to be able to offer markets on it for the very first time.

In what is sure to be an action packed weekend with hot competition at every jump, turn and trick, punters will be able to invest themselves even further by betting on just which of these skilled riders will come out on top”, stated Oldridge.

Equally excited is Event Director – Ryan Sanderson, who believes the partnership with Ladbrokes and subsequent introduction of betting is a huge coup for supercross racing in Australia.

“Ladbrokes are incredibly innovative and they believe in the AUS-X Open providing the ultimate combination of racing and entertainment, as much as we do.

This will be the first time in Australian Supercross history that fans will be able to bet on their favourite riders.

The anticipation and hype for this year is building so quickly, we’re as excited as anybody to see what happens on-track and it is anyone’s guess who will be crowned the coveted AUS-X Open Champion, the field of riders is that deep this year!” exclaimed Sanderson.

Odds for the SX2 Class will be released within the week.

Stewart’s troubled year continues after another crash in Daytona. […]