KTM 450SXF: We throw a leg over the frontrunner in the big-boy class in tests and shootouts around the world 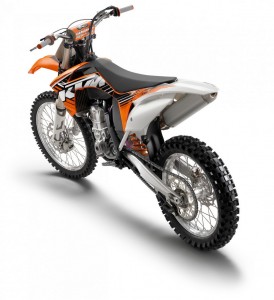 It wasn’t that long ago that the KTM 450SXF was the tail-end Charlie of the 450 field. It always had power but struggled to get it to the ground. KTM wasn’t really taking the class seriously as its investment dollars seemed to be directed at the smaller-capacity bikes.

Then some things changed. KTM wanted in on the US scene. It wanted to establish itself as a credible brand in the US and run a race team that riders aspired to be in. Within a short time it’s more than met those goals. Roger DeCoster was bought on board to control the race team and Ryan Dungey to showcase the bike on track; suddenly KTM was everywhere and the race wins started to flow.

On top of that, the production bike has improved enormously of late. The KTM450 is now recognised as a frontrunner in the big-boy class in tests and shootouts around the world. The company is on a roll — and on a global scale. 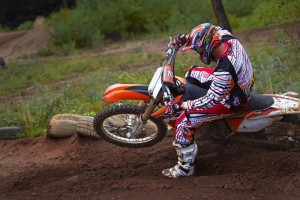 The new 450 comes with a change of gearing to 13/50, stiffer clutch springs and an updated exhaust. Not much in the way of ground-breaking technology but all of them can and do make for a different effect on the bike.

All of the adult KTM bikes feel the same from the saddle: roomy, spacious and with the bare necessities to go racing. The brakes are class leading and the clutch hydraulic. 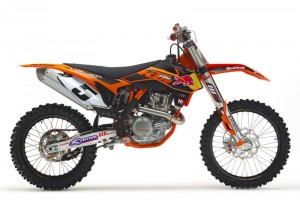 Well, when you step onto a KTM 450SXF, within the first 100 metres you become aware you’re on board a 450cc motocross weapon. This motor pumps out some serious ponies. KTM has never had much trouble developing power and it wasn’t that long ago that the 450SXF had a slow-revving, almost off-road power delivery. That day is gone.

The KTM now produces a quick-revving, responsive and powerful race motor. It’s almost like it’s changed its target audience from the conservative kids of European MX to the amped-up, high-octane, sideways-hat-wearing animals of US supercross. It’s a lively feel off the bottom that just continues to build momentum all the way to the throttle stop. It’s fast, not over-aggressive and certainly a motor that excites the rider.

In terms of comparing it to other motors, both the Kawie and the Yamaha feel like they produce a similar amount of power and are ahead of the Suzuki and Honda. The Kato is a bit smoother off the bottom than the Japanese bikes but still packs enough thrust to make it go. Midrange, it comes into its own and the top end is class leading. 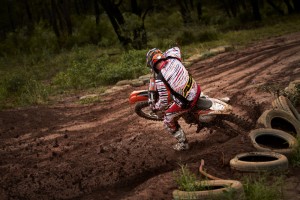 One area where KTM needed to improve was in the setup of the production bikes, especially the bigger-capacity ones. What you can get away with on a smaller capacity 250 or 125 doesn’t apply with a big bore 450. The weight, power and speed of the bike all magnify any issues in setup or design.

Thankfully, KTM has put hours of R&D into the 450 and it’s now a solid-handling 450 machine. The fork offers a plush ride for all but the fastest riders and holds up nicely in braking bumps. If you pull a couple of “Crazy Ivan” laps, you might get a bit too much travel going on; but for our conditions and the speed of the riders buying this bike, the KTM450 forks work pretty well.

The shock takes some careful setting up as it can be quite sensitive to any adjustment. Right from new, the ride is a bit busy. As with the 350, the back just moves around a bit much, especially on acceleration bumps. Our solution is to play with ride height to get the feel you like. Some riders went beyond the 100mm of ride height to get the rear to settle while others stayed at 100mm, dialled in some clickers and spent some time with fork height. It can be made to handle well; it just takes some input from the rider to get the best out of it.

There’s no doubt the KTM is right in contention for the shootout win. It packs a motor that impressed every test rider, some solid and predictable handling and a high-standard build quality. It ticks all the boxes of what a rider needs to go fast. There’s a reason more orange bikes are appearing at your local track and that reason is that the level of KTM’s production bikes has stepped up considerably. This is a good motocross bike.

The KTM 450SX had the strongest engine out of the bunch but the suspension felt a little twitchy to me. It never really felt planted in the rear but it has a very nice engine, brakes and clutch.

“Holy shit!” That was the first thing I thought when I cracked the throttle on the KTM 450SX-F. The engine on the KTM is very strong. On a grass track or a loamy, watered and prepped motocross track, it would be wicked fun. However, Clarence was getting dry by the time I got on the KTM450 and I got myself into a few serious moments due to the extreme burst of power delivered by the right wrist. I wasn’t 100 per cent confident with the front end of the bike, which didn’t help my scary moments. In the right hands, this thing is a loaded gun ready to be fired to the front of the field. In the hands of an arm-pump-suffering C-grader on a hard-pack surface, it’s a wild ride. The ergonomics on the KTM were one of my favourites. The quality of the motorcycle is first class. The grips are good, the handlebars oversized and the footpegs nice and meaty.

The engine on the KTM will blow your wig off. It has power on tap and will be a handful for plenty of riders. It’s not uncontrollable — just aggressive. If your throttle control isn’t on point you may find yourself trying to reel the bike back in now and then. The KTM had a different handling feel to me than any of the other bikes, something that might take a little to get used to. It felt a touch on the harsh side if I had to describe the difference — not at all horrible, just different. As always the brakes, hydraulic clutch and electric start all receive a gold star from me and this bike really stands above the rest in those three departments. The 450 SX is fast but for me isn’t the same overall package as the KXF or the YZF.

I just loved the seating position on the KTMs! I’m six-two and have a tendency to sit toward the back on most bikes; however, 0ther SX seemed to let me get right up on the cap without thinking about it. The motor has power on tap but I felt some of the other bikes put it to the ground better. This bike has some trick components like Brembo brakes, hydraulic clutch and Domino grips. Although a little weird at first, the electric starter would start a stalled motor in a flash after a tip-over in a race. 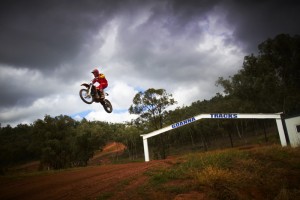