KTM 350SXF: We throw a leg over the new and improved KTM 350 but where does it fit within the racing world?

I have to tell you, I wasn’t a huge fan of the 2011 KTM350SXF when it was introduced. It felt as heavy as a 450 on the track and went like a 250. It needed to lose weight and gain power all at the same time before it could be taken credibly and then it still needed to find a class to race in as it was caught in the middle of the major racing classes around the world.

In 2013, the KTM 350 got what it needed. Some weight was saved, the power was pumped up considerably and at least now it felt like a bike that was viable and a worthwhile option for the right rider in the right circumstance.

I still struggle with where the bike fits in; so it seems does the rest of the racing world. You can’t race it in the MX2 or Lites class, so it must be an MX1 or Open bike — but you don’t see too many on start lines around the world. Cairoli is rumoured to have anything from a 350 to 420cc depending on who you listen to while anyone in the AMA world has all but ignored the bike. 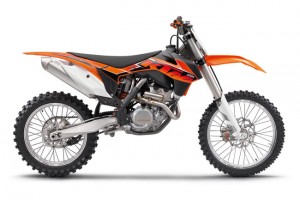 KTM made a range of small-detail changes to the 350 for 2014: the chain guide, seat foam and a few other things got some minor updates. The bigger changes happened in the fork and also in the ignition mapping to help give the 350SXF some more thrust.

Not much has changed in the KTM bike layout in recent years. Despite compacting the design over time, KTMs still have the roomiest rider areas of all modern motocross bikes. They are also minimalist, with no excess junk. There are the bars, the world’s smallest bar pad, some levers, grips and a couple of cables — and that’s it.

KTM brakes are the most powerful in motocross. They still retain a good, positive feel about them. The front is a one-finger operation; the rear has always been strong but in recent years the grabby feel has been reduced. The hydraulic clutch is great for all conditions apart from deep mud or sand as it’s hard to sense when the clutch is going away as the lever feel doesn’t change. It’s a good question why none of the Japanese brands have gone to the hydraulic clutch yet and one we don’t know the answer to. Strangely enough, race teams on Japanese brands seem to bounce back and forth on the use of a hydraulic clutch.

OK, if you’re a racer, here is the only question you need to ask yourself before buying a KTM350SXF: are you happy to pull up at the start line knowing you have 100cc less under your butt cheeks than the guy next to you? If the answer is yes, then the KTM350SXF just could be the bike for you. If the answer is no, walk away now.

Everything that’s wrong with the KTM350SXF surfaced in the first five minutes I hopped on the bike. As I leapt on, the call went out to the riders to meet at the start line for some start photos and video. I slotted inside of Michael Byrne who was KXF mounted at the time. Here was my chance to show up an AMA star and show him how we locals do it.

The gates dropped and I jumped out to a half a bike length lead and set off for the world’s greatest holeshot. By the time I shifted third, Byrne was alongside me; when I hit fourth I was a bike length behind and dropping fast. In a straight-up, no-punches-pulled drag with the heavy hitters of the 450 class like the KXF, the YZ and the KTM 450, the little 350 doesn’t stand a chance so you’ll always be working your way forward after the first turn.

I don’t doubt lap speed would be the same as a 450 and by the end of the moto, the majority of racers would be faster on the lighter, more manageable 350, but setting people up to pass would be a pain and the roost from a 450 can be a nightmare.

But if you’re that guy who just likes more power than a 250 and finds the modern 450 a serious arm-wrestle, the KTM350SXF is for you because if you take out the class issues this is a damn fine motocross bike. The power improved considerably over the time with more torque added lower in the rpm and more peak horsepower up top. It still likes to be revved hard but the motor is far more versatile and rider friendly than its first incarnation in 2011.

I’m a huge fan of the bike but still question where it fits into the current class landscape we have in place.

Despite the ergos giving the impression it’s a bigger and roomier bike, the handling in general is quite good and precise. The kilos lost have only made it a better bike to ride and increased the agility and fun factor of the 350. It can be ridden aggressively like a 250 and tossed into turns with abandon or you can go for the smoothly flowing arc of corners like a 450. Let the way you ride the motor determine how you want to ride the bike: rev it and attack or torque it and flow.

The KTM fork has improved enormously over time. The days of it diving like a Spanish soccer player are over and the current generation of KTM forks have a good feel to them. They hold up under heavy braking and have a planted feel on corner entry. Most riders find them agreeable in the majority of racing situations.

The shock is where a KTM rider will need to invest some time. It’s not a long way from the mark but the vibe I got from both the 350 and the 450 was an active two-stroke-like feel from the rear end of the bike. The front half of the bike worked great while the rear was just a little busy and we took some time to calm it down just so it was settled for corner entry and acceleration.

I really like this bike and, at my age and speed, I’m probably the guy who fits the profile for a KTM 350 rider. I have some skill but not the fitness to ride a 450; I have the technique but not the aggression to make a 250 work and I don’t race. The issue I see is that I’m a niche market already in a niche market. It’s a great bike still looking for a home in the motocross world.

If you’re riding for fun or racing without worrying about getting a holeshot, this bike may suit you. There’s no way you can expect to consistently holeshot races when you’re giving up 100cc — as long as you accept that you shouldn’t have a problem. The power is much stronger than the original 350 and the bike does feel less than a 450 in terms of perceived weight when you’re riding it. The engine works like a very strong 250F rather than a mellow 450: it revs to the moon and you have to keep it on song to get the most out of it. If you ride more than race, you should consider the 350.

The KTM350SX-F is much improved compared to the machine KTM originally delivered. It has more power than it used to but obviously still less than the 450s. It’s very light, easy to throw around and without a doubt the bike I could ride for the longest around the Clarence circuit. However, the lack of grunt is both a blessing and a curse for someone at my level. You can’t short-shift the bike like you can a 450 and if you’re not a featherweight you’ll struggle to pull a good start on this thing. If you spend your weekends blasting around your local track punching out a billion laps and burning fuel rather than lining up behind a set of start gates, this bike is certainly a strong option.

When I rode this bike I couldn’t stop thinking of all the people who’d be faster or get more riding enjoyment from the sport of MX if they had an SX 350 and on certain days I’d be one of them. It felt similar to the 450 but I had more time to work shit out on the fly. It made power that was closer to 450 than a 250, if you know what I mean.

The KTM350 is a fun bike to ride but to be competitive against 450s it would be a lot of work; you would have to be very aggressive.