Ever since the major overhaul for the 2012 season, the Kawasaki 450cc machine has been at the pointy end of shootouts and media awards around the world. Kawie took a heavy, fat and lazy 450cc bike and trimmed the weight, narrowed the girth and pumped up the juice for 2012 and the bike has been a hit ever since.

Let’s use Chad Reed as an example. His foray into Kawasaki in 2010 was a failure and he stated that he struggled significantly with the bike. Just four years later, after some major changes to the KXF450, Reed is back on green after testing nearly every bike available and said to be pumped with the bike’s improved performance. 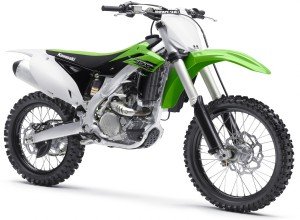 The long and the short answer is nothing. Well, unless you include bold new graphics as an update. The 2014 KX450F is the 2013 KX450F. Fortunately for Kawasaki, the majority of the other brands also went for the BNG so they didn’t get left behind.

On top of that adjustment, Kawie also offers the adjustable footpeg mounts which give riders around 10mm difference between the two optional footpegs mounts. It might not be essential but it’s a good option to have to help fine-tune yourself with the motorcycle.

The tank, seat and bars all feel natural and the Renthals used are a good bend. It was only a few millimetres Kawasaki trimmed the chassis girth down in 2012, but it’s certainly noticeable and a change for the better. Lever pull is light on the clutch and the brakes are standard Japanese units.

This is the motor by which the others have been judged. Sure, some might have more up top, others might burst off the bottom with more authority, but when it comes to pure power and power delivery it’s the Kawasaki KX450F that stands tall.

The throttle feels connected and response from hand to motor to rear wheel is quick. Then comes a long, muscular surge of power that just continues right through the rev range — powerful but not in an intimidating way. Yes, it makes 56-plus horsepower. Yes, it’s race orientated but it doesn’t hit or surge, thrust or kick. Just look at the throttle as a volume control and turn it up and down as you need it.

Kawasaki offers an optional soft or hard mapping plug to fine-tune the power. Soft and hard refer to the track surface, soft giving you a more aggressive feel while hard tapers the power off a little. If you’re to run the motor in standard trim, we suggest the soft plug as it just sharpens up the whole rev range and gives a livelier feel when on the track.

There is also a traction control feature that can be used during starts. Once the red light is on in the unit on the left-hand side of the handlebars, the ignition is slightly retarded in an effort to reduce wheel spin and gain maximum drive from the start gate. Once the bike has been shifted up a gear, it reverts to the programmed ignition curve. I think it’s half gimmick, half practical; I’m not fully sold on the practical use of it in the real world yet. 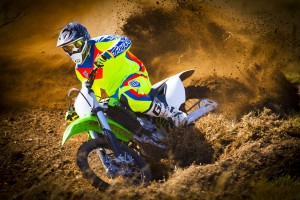 Over the past couple of seasons, Kawasaki has developed a good compromise between an agile and precise-steering bike and a stable and calm bike at high speed. It was always solid in high-speed stability but the chassis change of 2012 added agility to the list of features and the KXF450 is now seen as one of the better handlers in class.

To fine-tune the steering, we just played with the fork tube height in the clamps. We ran them flush with the clamps when there was plenty of traction on offer and slid them 5mm down when we were searching for more front-wheel feedback.

Kawasaki switched to the air fork for 2013 and seemed to have better success with it than Honda’s first attempt. The base setting seemed to be a little more fine-tuned from standard and, as a result, rider talk in the pits about the new KXF fork was almost non-existent.

When set at the 35–36psi range (35 is stock), the fork works pretty well. The advantages of switching to the air fork are that it is lighter and easier to adjust and the next level of technology from which to develop suspension. At this point in time, a well-set-up air fork is about as good as a well-set-up spring fork so it stands to reason the air fork will be the way of the future.

For me, I like the feel of the air fork on braking bumps as it offers a slightly plusher feel than a spring fork when set up well. The horror stories of leaking air and diving forks still scare me but seem a little more few and far between these days.

The shock was a 100mm set-and-forget. No riders over the day had any major issues with the shock performance and all felt the rear end was a highlight of the bike.

This is one impressive 450: a motor to die for, a chassis that caters for a wide range of riders and skill, sorted suspension and a proven record on the race track are what you get when buying a KX450F. Kawasaki didn’t change much for 2014 and it probably didn’t need to as its major overhaul in 2012 picked up the majority of the issues. Some fine-tuning in 2013 and now 2014 has left the Kawie a very refined bike. Fast guys, slow guys, fit guys and lazy guys all loved the KX. From tyre to tyre, it’s one hell of a bike. 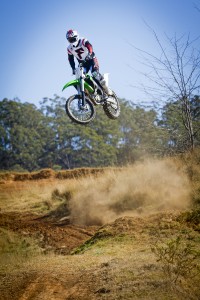 It didn’t do anything awesome but I never felt I needed to change anything. Everything felt like it was in the ball park for a standard bike and the engine was solid and smooth. Overall, it was probably my pick as the best package.

For me, the Kawasaki had a nice and strong engine without the need to rip my arms out and supply a dose of whiplash. I was able to short-shift the bike around the skatey turns and open it up when there was some traction in the sandy berms. The forks on the Kawasaki were really good; [they] transferred a responsive and positive feel to the handlebars and I had a lot of trust in the front wheel sticking to the dirt. I’m not a big fan of the soft sit-in seat that the KX produces, although it’s a Kawasaki trait and I was pretty used to it fairly quickly. To me, the Kawasaki was my pick. It was easy just to jump on and go for it. Ticks to a great engine and great suspension package. Crosses for standard-sized bars and horrible grips. It would come down to the Kawasaki or the Yamaha as my favourite with the KX just ahead. I’d march down to the local dealer and see who’d do the best deal.

After only a couple laps it was obvious to me that this was the bike that ticked all of the boxes: motor, brakes, steering, suspension ,controls, cockpit etc. Initially, the seating position felt lower compared to the other 450s but I personally don’t mind that. The cheese-grater stock grips would have to go but that’s no biggy. I felt I could keep a good momentum going all the way around the track. There were no stopwatches used so who knows, but I also felt quicker on it than on the other bikes. The KX 450 for me was the most well-rounded bike I rode on the day.

This is a 450 that I’ve always felt comfortable on and the 2014 model is no different. When I headed out on the track, nothing really stood out to me; everything just did what I felt it should. There wasn’t anything happening that was negative. It has a solid handling feel and the air forks provided a confident feel. The engine is powerful and packs a strong bottom-to-mid punch without paying for it drastically up top. If there was one thing I could pick the KXF for it’s that you sit in it slightly more than the other bikes. This is a solid bike right off the dealer floor and for me is battling with the Yamaha for the top spot. 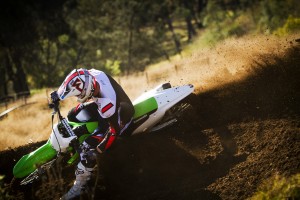 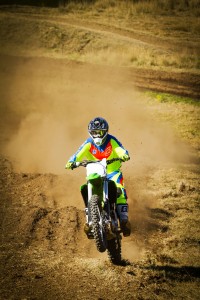