The Suzuki #7 has ruled himself out of immediate racing until his health has fully returned. 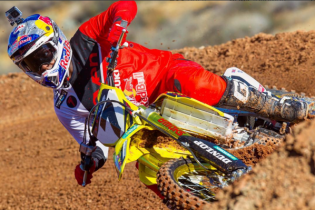 The lingering effects of a first round crash have left Stewart with a less than desirable start to the 2016 season. After missing round two, Stewart attempted to race rounds three and four before blurred vision and dizziness twice forced him to pull the pin early.

Stewart’s health is of paramount importance and while we would love to see Bubba out there mixing it with the best he must take some time off to fully recover.

A full statement delivered by James Stewart on the issue can be read below:

“Just wanted to update you guys on what happened Saturday night. I could tell from the 1st practice that things weren’t right from my A1 incident. But I figured if I kept riding things would get better.

Well as the night went on things got worse and that’s what led me to pull off in the main. The worst part is, you never know how you’re gonna feel until you try. So that’s why I decided to try to race this weekend.

You can practice during the week all you want but racing is completely different.

It’s my fault tho because instead of letting things heal 100%, I keep rushing to race for my fans and because I love to race. Clearly I’m not ready to race and After Saturday I felt like an idiot for trying to when I know I shouldn’t.

I can tell you that I rather never race again if I have to pull off like last Saturday. To me a person that pulls off is a quitter and as much as I hate quitters, I felt like one afterwards until I thought about everything.

I shouldn’t of have been there in the first place. I was there bc I’m not a quitter and I keep trying to be superman for no reason. But it doesn’t matter anymore bc the people around me know who I am and my “real” fans know also. So at this point, I’m gonna listen to my body and come back when IM ready to race.

It could be this weekend or a month from now but I’m gonna do what’s best for me and not what’s best for the rest. I love you guys and I truly appreciate your support always. I came back to race and have fun this year and racing when I can’t function 100% isn’t racing or fun.

So I’ll be back when I can do both of those things like the real js7 does.

I want to personally thank all my sponsors for sticking behind me through all of this. I know you guys say I don’t need too thank u but it’s nice to have all of you in my corner always. And my fans, you know where my heart is and I can’t wait to be healthy so we all can enjoy the results together like always.

Yamaha Racing Steps back in Time

Build Your Adventure 2016 Suzuki DR650SE Is On Sale Now