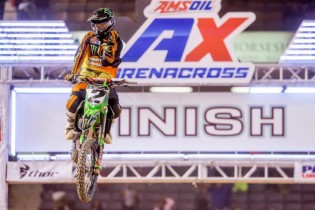 It has been a terrific start to the 2016 AMSOIL Arenacross series by Team Babbitt/Monster Energy/AMSOIL Kawasaki. Jacob Hayes made it three wins from three rounds for the team. The rider shone in the opening moto grabbing the holeshot and leading from start to finish.

A crash on lap nine by Austin Stroupe resulted in a red flag with riders forced to restart in single file. Hayes led out the second start ahead of Chris Blose and Travis Sewell. At the end of the 15 lap main, the top three remained unchanged with Hayes taking the points.

Choosing the inversion suitcase gave Hayes a lot of power and the number 0 case was selected.  The second main would not be inverted meaning Hayes had first gate pick. Despite his choice, a slower start left Hayes back in sixth with Regal scoring the holeshot. Gavin Faith was close in second while top riders Sewell and Blose were deep back in 12th and 14th respectively.

On lap six, Gavin Faith made the leading pass in the whoops while further behind him Hayes was pushing through the pack. The race one winner had made his way up to third on lap six before passing Regal into second on lap 12.

Heading into the final turn Faith had the race all but won before a dramatic turn of events saw him crash from his bike, allowing Hayes to steal the win. Faith was unable to recover fast enough as five riders passed him by, Regal taking second and Lamay in third.

A Hayes clean sweep scored him a five point win over Lamay (4-3) and Blose (2-5) who were tied for second. Ultimately Lamay was awarded second after scoring a podium finish in the second moto. The unfortunate Faith ended the night in sixth place (6-6).

In the Eastern Regional Arenacross Lites main event Daniel Herrlein, remained unchallenged after shooting into the lead on lap one. In a rather uneventful race the top three remained the same for the majority of the event with Jacob Williamson and Tyler McSwain finishing second and third.

Herrlein now moves to the top of the overall class standings, five points ahead of Staley.

The third round of the 2016 AMSOIL Arenacross series will take place next weekend in Pennsylvania.

Video: Hunter Lawrence – The Next Chapter

17/11/2015 Ashley Diterlizzi NEWS Comments Off on Video: Hunter Lawrence – The Next Chapter

Following the news Hunter and brother Jet have signed to race in Europe with Monster Energy Kawasaki in 2016, Dunlop Media have released this short film. […]

PR: Monster Energy Kawasaki Down But Not Out After Tough Wonthaggi Round

01/05/2012 Shane Booth NEWS Comments Off on PR: Monster Energy Kawasaki Down But Not Out After Tough Wonthaggi Round

The 3rd round of the 201 32 Monster Energy MX Nationals at Wonthaggi, Victoria didn’t yield the results Monster Energy Kawasaki was hoping for however Jay Marmont and Kade Mosig’s 7th place finishes in the MX1 and MX2 classes respectively keep their championship aspirations alive in a long 10 round series. […]