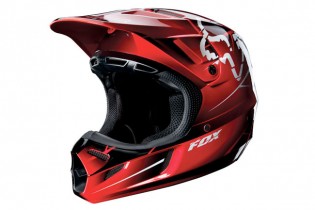 The new Fox V4 looks cool, as if a small Ferrari Transformer Robot had launched off the ground and mechanised itself around your head. From its sturdy, stylish peak to the racecar-like lines and venting, this is one helmet that’s almost too good to get dirty. Even the gloss finish is typical of an automotive paint job, only it’s made to cop hits from roots and tree branches.

Looks aside, the biggest test was going to be comfort. I’ve worn out a few of the earlier V3s, which are light, well vented and look the part, but the polystyrene shell put uneven pressure on the back of my head. As for the new V4, it seems Fox has put a lot more development into making it compatible with the human skull, as the liner now envelopes your head with even pressure all over.

I basically pulled the new lid out of the box and raced this year’s A4DE, so it was a good thing the V4 offered no distractions throughout the event. Coupled with the aerodynamics of the lid, the peak is shorter and fastened more rigidly than most helmets so your head doesn’t thrash around violently in crosswinds or at high speed. Ventilation is optimal, too, so if you’re grovelling at low speed and starting to overheat, perspiration is wicked away quickly enough so as not to dribble into your goggles and eyes. It’s without a doubt the best lid Fox has come up with to date. We’ll just have to see how it holds up after a few months in the elements of off-road riding. So far, so good; still looks like a bought one after four days of bush bashing at the A4DE. – Adam Riemann

The subject of neck braces is divisive. […]

Nothing breeds confidence like a good helmet. It’s the start and end point. […]