The conditions presented at the opening round of the MX Nationals at Appin, were challenging to say the least. For Empire Kawsaki they were treated to a rough and tumble start to their 2019 MX Nationals campaign.

With the Macarthur Motorcycle Club circuit receiving a significant amount of rain in the lead-up to Sunday’s racing, and consistent downpour during proceedings, the brutally tough and muddy conditions ultimately forced organisers to declare the event following the first motos.

In the premier MX1 category, popular Victorian Long piloted his KX450 to P15 in qualifying after sampling a one-lap strategy, however his hopes of a strong finish in the opening moto were dashed when a rider lost control into turn one, taking down the number seven. In a gritty effort, Long endeavoured to press on, however a suspect elbow injury – which will require further examination this week – forced him to retire from the outing.

“It was obviously a very muddy round here at Appin,” Long stated. “In qualifying I just wanted to get one lap in – it wasn’t the best lap – but I just wanted to get into the race. I had a really good start, but someone lost control and ran into me, so I think I’ve hyperextended my elbow. I’ll have to get some X-rays, but I feel like it’s only minor and I’m hoping to be back for round two. I tried to get back on the bike today and continue riding, but I just couldn’t hold on.” 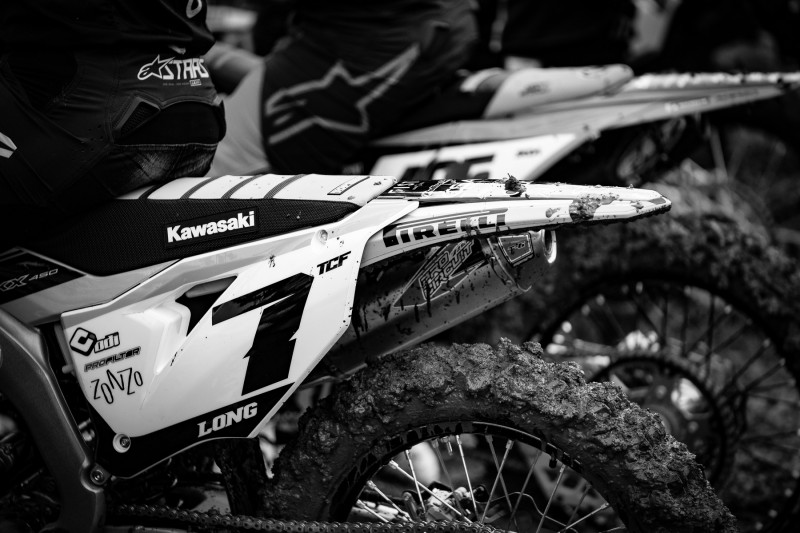 Contesting the MXD category, Hellier got off to an inspiring start to season 2019, winding up ninth in qualifying. He too would suffer from a first turn incident, ultimately rebounding and working his way from the rear field to 23rd place aboard his KX250.

“I felt awesome on the bike and qualified inside the top 10,” Hellier commented. “I had an awesome start, somewhere near the top five, but then I went over the bars at the first turn. I bounced back to 23rd, which wasn’t too bad considering. I’ve really adapted to the Kawasaki well – I know I can run a good pace, I just need to get the start and keep it on two wheels.”

Empire Kawasaki team manager Tyson Cherry acknowledged the difficult conditions that not only the riders faced, but also teams and crew. In the outfit’s first appearance as the official Kawasaki team of the MX Nationals, Cherry is excited for what’s to come following their debut in the prestigious motocross series.

“It was a tough start to year in these challenging conditions,” said Cherry. “Deakin went down in the first turn and charged back to 23rd, so that was a really promising performance from him. Dylan unfortunately got caught up in the first corner, hurt his elbow and couldn’t finish the race. It was definitely awesome to finally be here at the MX Nationals in Kawasaki colours, everything has been going great and I’m excited for the year to come.”

Empire Kawasaki will return to action on 31 March at Wonthaggi in Victoria for round two of the 2019 MX Nationals series. Visit www.kawasaki.com.au for further information on Kawasaki Motors Australia.