In light of the startling findings rocking the NFL in America and the death of Dave Mirra, it’s time we also had a conversation about brain injuries.

Have you ever heard of Chronic Traumatic Encephalopathy (CTE)? It’s a bit of a mouthful but it might be time you got to know what it is and how it will almost certainly come to affect the sport we love.
Head knocks are an unavoidable part of riding dirtbikes. We often dismiss them as having just, ‘rung our bell’ or in worse cases taking a dirt nap, but it’s often laughed off as no big deal. There are more serious cases of course, but as racing fans we tend to just want to know when a rider will be back on the track and don’t think too much about the long term consequences to their state of mind.
But recent studies have shown that CTE is something that can’t be ignored. Very simply, CTE occurs as the result of repeated brain trauma. The symptoms may include severe depressive episodes, memory loss, violent outbursts and suicidal thoughts.
Until very recently it’s been diagnosable only after death and the studies done on American NFL (National Football League) players makes for downright frightening reading. In a study released by The Journal of the American Medical Association it was concluded that of the 111 brains of ex-NFL players studied, 110 had Chronic Traumatic Encephalopathy (CTE).
The subject of CTE has rocked the NFL since its discovery in 2005 by a Dr. Bennet Omalu. Since then the NFL has done a great deal to cover-up or diminish the seriousness of the findings that several players who showed both erratic and depressive behaviours before death, often through suicide, in fact had brains that when examined post-mortem demonstrated CTE.
A great deal has been learned about traumatic brain injuries not only in relevance to NFL but also to action sports, and no single incident brought to light more than the tragic suicide of BMX legend Dave Mirra, who has also been diagnosed as suffering from CTE. He didn’t know this though. His family didn’t know it nor did his friends. One of the great tragedies here is that up until November 2017 CTE could only be diagnosed through examination after death. The symptoms may be there but the diagnosis has always come too late. Mirra had suffered severe depressive episodes and his wife Lauren, noted that he often looked lost. In an interview with ESPN she recalled, “I remember seeing him sitting on our bed one day, in the last month of his life. I had just gotten out of the shower and saw him hunched over with the blankest lost look. I sat down next to him and held his hand. I said, ‘What is wrong? Are you ok?’ And he just shrugged his shoulders. He couldn’t even speak. He didn’t know. He couldn’t put it into words. He was lost. He was helpless. It was completely different from who he was.” 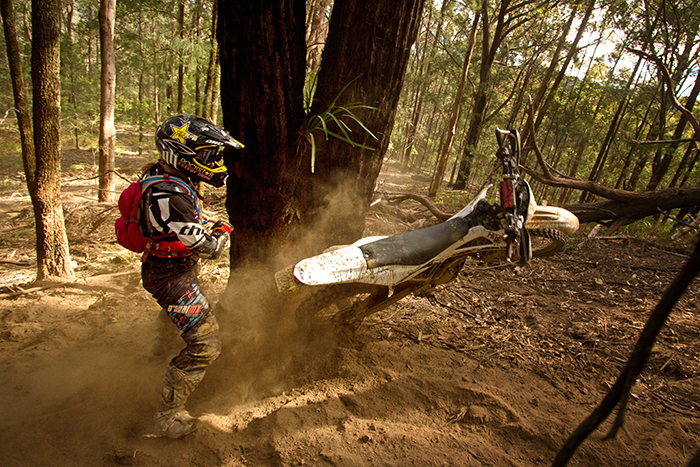 WHAT DOES THIS HAVE TO DO WITH RIDING DIRTBIKES?
Chronic Traumatic Encephalopathy is the result of repeated brain trauma. What needs to be acknowledged here is that brain trauma doesn’t come solely from hitting your head. It’s also a result of coming to a sudden stop or taking a solid jolt which makes the brain move violently change its shape inside the skull.
Your brain is surrounded by a layer of liquid called cerebrospinal fluid which keeps it apart from the skull. The brain is a pretty heavy thing and let’s say you’re traveling at 45kph and hit a tree, coming to a sudden stop (done that more than I care to admit). Your brain actually surges forward and pushes against your skull. It weighs about 1.5 kilos so imagine throwing a kilo-and-a-half of playdough at a tree. In a mild case you’d say you’d just rung your bell and in a bad case you will be knocked out. Either way you will have suffered a degree of concussion. Not every concussion will leave a noticeable change but on the other hand any single concussion can damage your brain which is a pretty delicate and immensely complicated mass of over 100 billion nerve cells that controls everything you do, say, think and feel.
I had a solid crash not so long ago on a trail ride and I was pretty toasted for a week – in fact DIRT ACTION came out late that month because I couldn’t write properly. I just stared at the screen for hours and I still have no memory of driving the nine hours to home the day after the ride. I laugh about it because we all do but maybe it’s not so funny.
In an interview with Graham Bessinger, Travis Pastrana spoke about having worsening night terrors where he wakes and often runs around his house hallucinating and screaming. I can’t think of too many guys who have hit their head more than Travis who has admitted the concussions scare him and thoughts naturally turn to guys like James Stewart and Trey Canard who have had so many huge crashes in front of a crowd and who knows how many during practice when we’re not watching.
You may remember Broc Hepler was building a career when serious concussions in 2007 and again in 2009 brought it to an end. To this day Hepler feels the effects of his knocks and in an interview with Motocross Action admitted to his difficulty even reading a page without getting dizzy which affects his job as a relief teacher.
At this stage the research on CTE circles around sports like NFL, wrestling, boxing, ice hockey as well as military veterans but it just can’t be ignored that our great sport has a high number of brain traumas. You hit the ground pinned and you’ve just sustained some degree of brain trauma – it’s unavoidable. You may not recognize it completely at the time but it’s happened to a degree no matter what. And it’s not just a helmet issue, as we mentioned before, it’s impacts and sudden stops or jolts that throw the brain around in its room so-to-speak. A good helmet is absolutely vital, but it can’t stop a concussion in every crash and one very basic way to visualize it is to think of a marble in a jar. Shake that jar and the marble bounces around and it makes no difference if you put a $1000 helmet over the jar. That marble is your brain and the jar is your skull. 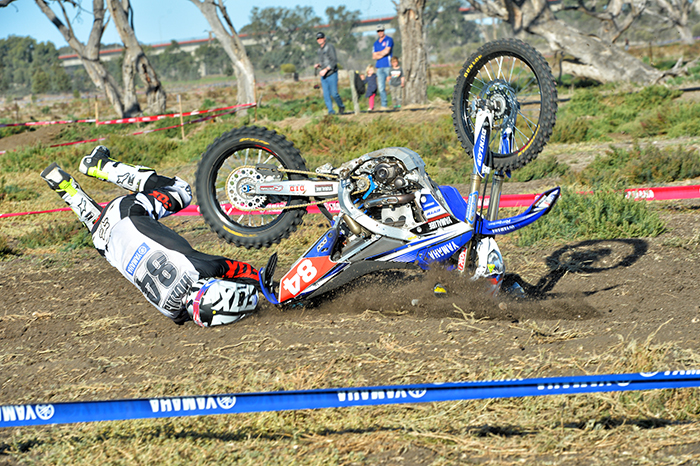 SO WHAT ARE WE TO DO HERE?
Do we stop riding and wrap ourselves in cotton wool? I’m not going to do that. But ignorance is not the answer either. We want the racer that’s feeling not right to go see someone. Racesafe is an invaluable resource so use them. We want the family that notices odd behaviour and deep depression or even violent outbursts to take action in some way to get help. We want everyone to look after themselves and know that concussions aren’t to be just walked off – especially with kids.
It’s not necessarily the one big knock that raises concern it’s the repeated blows, small or large that take their toll over time.
The average trailrider might have little to worry about but motocross does. It can’t be ignored that from juniors on up racers take hits one after another year after year.
In a paper titled, Concussion Knowledge in Amateur Motocross, released by Kristina Miller of Georgia Southern University it’s explained that, ‘A common misconception endorsed by the general public is that the primary sign or symptom of concussion is loss of consciousness, but this occurs in only 8-19% head injuries that are diagnosed as a concussion; even with motocross it is only seen in 16% cases.’ So you don’t have to be out for the count to have a concussion. That ‘rung bell’ is a concussion.
I’m no doctor. I’m learning about this stuff because that last crash had me out like I’ve not experienced before. I’m not overly worried that I might develop CTE but I also know that I have sustained a tiny fraction of the concussions that motocross racers do and that bothers me. Just be aware that you don’t need to hit your head to have a concussion and you certainly don’t have to be knocked out. Wear the best gear at all times and most of all look after and look out for each other.