The Australian rider became the 28th rider to win the main event in his first ever attempt. 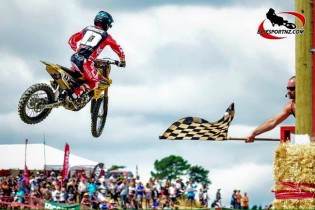 Defending champion and hometown hero Cody Cooper had some serious competition this year as returning MXGP riders Dean Ferris and Todd Waters crossed the ditch to have a crack at the Woodville title.

The main invitational event followed and at the end of the five lap scramble it was Aussie Ferris who took the chequered flag. Looking comfortable on his YZ450F Ferris is firming as strong contender for this year’s MX Nationals.

Cooper was a close second in the invitational while fellow Australian rider Todd Waters finished in third.

The riders will lock horns again next weekend as the 2016 NZ Motocross championships head to Timaru.

Kiwi Husqvarna Red Bull WIL Sport NZ Racing rider Kayne Lamont has had a cracking day in perfect conditions at the opening round of the 2014 Monster Energy MX Nationals at Broadford, taking the MX2 class round win ahead of KTM duo Brendan Harrison and Hamish Harwood. […]