Daniel Sanders won each and every round of the AORC in the E2 class, so we jumped at the chance to ride his factory Husqvarna FE450.

Having the opportunity to ride a factory race bike is not to be taken lightly – it’s a very cool experience. Riding this particular race bike was on another level, this FE450 has just wrapped up an Australian Championship and furthermore, gone undefeated in class. Luckily for us, we had the chance to ride Daniel Sanders’ Husqvarna FE450, the bike that took him to a perfect E2 season in the Australian Off-Road Championship (AORC). Daniel Sanders’ is an incredibly talented motorcycle rider, so I was intrigued to ride his bike to find out how the style of bike he rides. 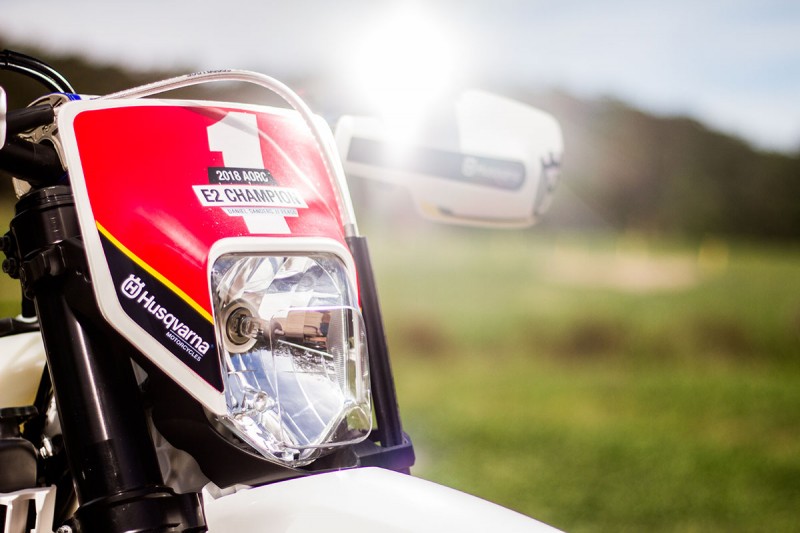 Once I had finished admiring the work of art sitting in front of us, I swung a leg over the beast. First things first, ergonomically, Chucky runs a fairly standard set-up. The Renthal handlebars are a nice straight bend, the levers aren’t in any crazy position, neither are the foot controls. Depending on the style of track that Sanders is competing on, he will either keep or remove the cross brace on the Renthal Twin Wall handlebars. It’s not something I had seen before, but removing the brace allows for some extra flex, it’s well-known that some riders cut the cross brace bar to allow for extra flex. Chucky takes that to the next level. We rode it without the brace, so essentially it’s a Renthal Fat Bar handlebar mounted to the front of the bike. ODI grips are fitted to the Husqvarna, no messy glue in the pristine husky workshop. The seat is nice and grippy, I would realise the need for this when it came to turning the throttle. 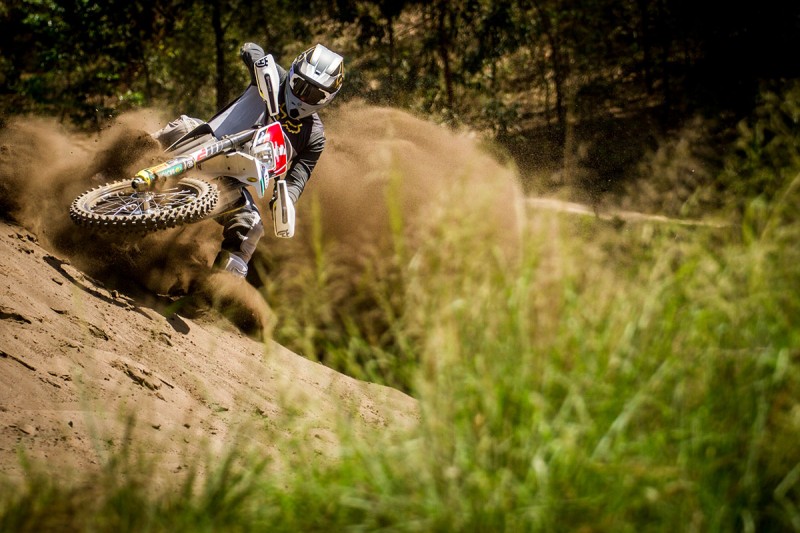 AGGRESSIVE NATURED
In talking to Christian Horwood, it was revealed that Chucky does change and tune his bike quite a bit depending on the style of track the bike will be raced on. Particularly when it comes to the Vortex Iginition, it’s an easy way to change the power curve and nature of the beast. At some rounds, particularly in deep sand Chucky will opt for a completely different engine package. I first rode the bike in some fairly tight single trail, it’s quite easy to ride in the bottom-end, but the aggressive bark looms around the mid-range and into the top-end. With how we rode the bike, the engine was smooth but certainly had some bark and aggression to it. It has almost a motocross-bike feel to it. In the technical terrain, I was able to use the burst of aggression to pop over a log or rock, but keep it in the low-range when dodging trees and winding through the bush. It’s quite a versatile engine package. When you compare it to say, Daniel Milner’s KTM500EXC also tested in this issue, they are fairly different engines. Of course, the nature of the 500EXC is a lot more torque-based, but the 450 of Sanders’ FE is a lot more aggressive and lively. 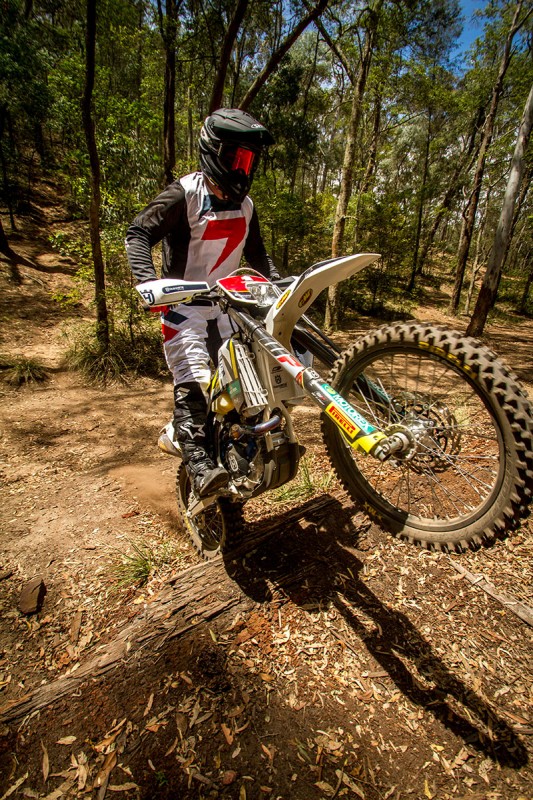 For the full test and breakdown of parts used on Daniel Sanders’ factory race bike check out issue #227 – on sale now.