Husqvarna’s Nathan Crawford has topped a very competitive round in the MX2 class. 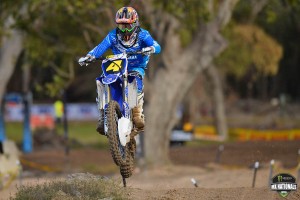 As gates dropped on the first of three motos, CRF Honda Racing’s Kyle Webster secured the holeshot ahead of Jayden Rykers and Caleb Ward. Webster and Rykers would swap positions a number of times while sand specialist Caleb Ward would soon come under pressure from Crawford in fourth. All four riders would check out on the field, making for an interesting battle up front.

Webster soon claimed top position and despite Rykers every effort he could not catch the local Western Australian. The CRF Honda racer would claim the chequered flag in an exciting moto ahead of Rykers and Ward hanging on for third.

Moto two got started with a holeshot to Crawford before Ward soon made a move to the front with a perfect pass. The KTM rider showed his skills in the deep sand to pull away from the field while Crawford, Rykers and Webster once again battled for the minor places.

The running positions would not change for the majority of the race with Ward holding on to comfortably take moto two ahead of Crawford and Rykers. Race one winner Webster would finish in fourth.

With one race set to run, the round overalls were still anyone’s guess. Crawford once again got the pick of the starts while the consistent Ward and Rykers were circling at the front of the pack again. It was Jed Beaton who caught everyone’s attention early as the DPH Motorsports rider passed both Ward and Rykers on the same lap to move into second.

The chase was then on for the race lead and on lap five Beaton executed the pass on Crawford, moving to the front of the pack.

Not to give in, on the very last lap a determined Crawford would make the pass back, capturing Beaton and relegating him to second after a very strong ride, Rykers would finish third.

The MX2 class served up three different winners in as many races yet a showing of consistency by Crawford was enough for him to be declared round victor. The 4, 2, 1 result also awarded the rider the leader’s red plate now 13 points clear of second placed Beaton.

“This feeling is indescribable,” Crawford shared. “I’ve won rounds before but it hasn’t felt this good since I had that wildcard ride at Swan Hill as an U19 rider and won. It’s a great feeling because of how brutal the track was and how deep the class is. For me to carry the momentum into the break is great. I used to think the red plate would be a bit of a weight around my neck, but now I feel like I’m going to take every round one step at a time.

“Every race we rock up to, we start from zero. That’s what we’ve been doing this year and that’s been working for me, I think my worst result this year moto-wise has been eighth and other than that I’ve consistently been inside the top five. I guess that’s what got me the red plate and a 13-point lead, so I’m pretty happy with that. I’ve never actually had the red plate before in my senior career, so I’m very happy.”

Second place for the round lifted Ward to third overall in the championship, while local boy Rykers claimed the final spot on the round five podium.

The Motul MX Nationals will now have a mid-season break, with the sixth round of the championship, being held at Nowra in New South Wales on July 3, 2016.

With two riders in touch of the SX2 championship podium the Penrite Honda Wilson MX team are set to holty contest the final round of ASX. […]

A full list of teams for the 2015 MXoN has been released. Original team line ups may be subject to change pending rider injuries. The event will be held in Ernee France on the 27th of September. […]