With the morning’s races done and dusted, the afternoon crammed plenty of action into just a handful of races, once again seeing Australia’s up and coming stars impress in challenging conditions. 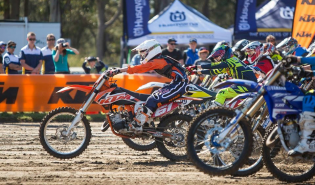 However neither Chittick nor Tomich would lead the way, the pair unable to hold back the lightening fast Lawrence who moved into the number one position after only one lap, while Chittick and Tomich battled for second.

And when racing was all but wrapped up KTM’s Lawrence once again crossed the line celebrating another race win, followed by Tomich in second, while Chittick raced to third, handing him the 65cc Solo 11 year’s Australian title.

When the big boys lined up for their last 100cc to 125cc 2-stroke 15 years class race, spectators eagerly watched on, to see whether Yamaha Junior Racing Team’s Hunter Lawrence could take out the Aussie title undefeated.

When bikes screamed off the start it was KTM’s Cooper Pozniak whose starting capabilities once again saw him take the holeshot. However Pozniak’s lead was short-lived – after only one lap Lawrence moved in to the lead, leaving Wyatt Chase and Pozniak to cop his roost.

With Lawrence once again getting to a commanding 10 second lead by the halfway point, the focus shifted to the battle for third, with Pozniak and Justin Hart banging bars for the final podium position.

When the last lapboard came out, Lawrence had stretched his lead out to an unprecedented 24 seconds, with Hart holding down second position, followed by Wade Kirkland who had made his way in to third.

And when the chequered flag flew Queenslander Lawrence crossed the line with a perfect scorecard, making him Australia’s 2015 100cc to 125cc 2-stroke 15 years class Champion, while Hart concluded the ten-minute moto in second, and Kirkland in third.

When gates dropped all eyes were on the 32 machine of Taj Marshall who entered the final race with a 19-point championship lead. However it was New Zealander Trent Collins who once again got a ripping start, and moved in to the lead ahead of Callum Norton and Jake Williams.

And after only one lap, onlookers were dealt a treat, as a three-way battle for the race lead saw Collins, Norton and Marshall all going head to head on one seriously roughed up Shrubland Park circuit.

The focus then shifted to the fight for second, as Collins separated himself from the pack, leaving Norton and Marshall to battle behind him. It was Marshall however who had the strength to keep Norton at bay, moving in to second position, while Michael Driscoll moved in to third.

When the ten-minute moto was done and dusted Collins broke through to take an outstanding race win, while Honda mounted Marshall crossed the line in second and clinched the Australian title, followed by Caleb Grothues who fought hard to come back and finish the race in third.

When the littlies in the 65cc Solo 9-u11 years class lined up for their final time, the youngsters had a tough task ahead of them, as they headed out on one seriously rough and sandy circuit.

With one lap down the running order saw Mancinelli out in front, followed by Myles Gilmore, and Smerdon who had dropped back to third. But it wasn’t long before Gilmore picked off Mancinelli too, moving in to the lead with plenty of racing to spare.

With only two laps to the finish, the battle for third position fired up, with Liam Atkinson coming back to snatch away the final podium position from Smerdon.

When the chequers came out, Gilmore wrapped up the 65cc Solo 9-u11 years final victorious, while Mancinelli held on for second, followed by Atkinson who wrapped up the final in third.

With a ladies championship to be decided in this race, the pressure was on, and Tahlia O’Hare proved she could handle the pressure and more, taking the holeshot on home soil ahead of Victoria’s Danielle Foot.

And after one lap, O’Hare showed no signs of slowing down, keeping Foot at bay and holding down the race lead, while Tanesha-Rose Harnet settled in to third.

As the 85cc 2 –stroke / 150cc 4 stroke all wheel Girls 12-u16 years class final reached it’s final stages, O’Hare managed to stretch out her gap to 11 seconds on Foot in second, while Harnet continued to maintain third.

When racing wrapped up, the order of positions remained the same, the main change being the 17-second gap between O’Hare crossing the line with the win, and Foot crossing the line in second, but doing more than enough to wrap up the Australian title.  In an outstanding performance Harnet held on to take the chequered flag in third.

With the big boys being the last class out on track at this year’s KTM Australian Junior Motocross Championship, spectators waited around to see the final champion crowned for 2015.

With that said, when gates dropped, the talented pack of riders launched down the start straight with KTM’s Cooper Pozniak once again taking the holeshot, before Yamaha’s Hunter Lawrence moved in to the early race lead ahead of Justin Hart.

After a handful of laps, Lawrence was once again untouchable, stretching out his race lead on Hart, while Tasmania’s Wade Kirkland maintained third position.

And when the chequered flag flew, Lawrence celebrated as he crossed the line, taking the final race win for the 2015 KTM AJMX, ahead of Hart in second place, while Kirkland wrapped up the ten minute moto in third.

Brett Metcalfe has almost made a fairytale return to Australian Supercross finishing runner up to Dan Reardon at Wayville Showgrounds. […]

The prologue for the Tatt’s Finke Desert race was run today with Honda’s Jake Smith topping the times ahead of his bother Todd. […]

The Junior Team impressed at round one of the South Australian Motocross Championship. […]