Australian supercross star Chad Reed has once again left a cryptic message for his fans suggesting a possible move to the MXGP for 2016. 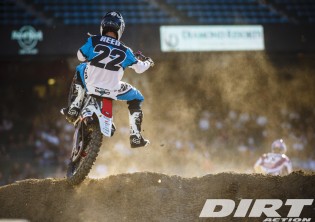 Reed posted an image to his personal instagram account which stated ‘The Official 2016 FIM Motocross World Championship Calendar.’ In explaining the post Reed says it has been 15 years since he has raced in the competition and that his mind is saying yes.

With much speculation surrounding his future, Reed remains the only marquee rider yet to commit to a team for next year.  In recent weeks we have learnt that Chad has split with Discount Tyres and has not officially signed with Yamaha despite rumours circling after he turned up on one for the Monster Energy Cup.

With Reed set to ignite the AUS-X Open next weekend, his latest post comes as yet another twist in this silly season story. Should Chad fail to find a factory ride for the 2016 Monster Energy AMA Supercross series a transition to the MXGP could be well on the cards.

18/05/2016 Ashley Diterlizzi NEWS, VIDEOS Comments Off on Video: MXGP Onboard

Take a GoPro lap around Trentino with Simpson, Anstie and Cairoli. […]

GYTR Yamaha’s Jed Beaton made a stunning MX Nationals debut taking an impressive victory at the opening round of the 2014 Monster Energy MX Nationals in the MXD category (MXD), while team mate Wilson Todd showed he is ready to step up with some spirited racing in his first pro level event. […]