Does an electric bike have a place in our world yet? We spent a heap of time on the impressive Stealth B-52 Bomber to find out 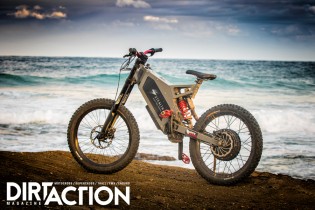 What makes a dirtbike a dirtbike? Adventure bikes have long-travel suspension. Road bikes had perimeter frames first. EFI was on a quad before a dirtbike so that just about leaves full knobby tyres. But you can’t put knobbies on an R1 and call it a dirtbike.

So what is it?

The answer is a dirtbike is made of a whole heap of things that come together to give you a WR-F or RM-Z. Not one or two but a multitude.

So, can an electric bike be a dirtbike? When the engine becomes a motor and the fuel becomes lithium iron, is it still a dirtbike?

This is why we’ve spent a heap of time on the Stealth B-52 Bomber electric bike — to find out where it fits in the grand scheme. If this is the future of dirt riding, just how good is it and is it ready to slot into the experience as we see it today? 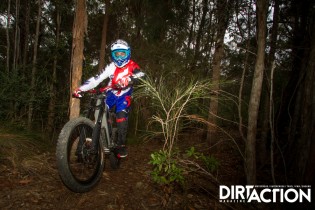 THE DISCOVERY OF ELECTRICITY

I first came across the Stealth bikes through their display at the Finke start/finish line. Stealth is an Australian company based in Victoria that makes three models of bikes: the aforementioned Bomber, the F-37 Fighter and the motocross oriented H-52 Hurricane.

Toby Price was zipping around the staging area on one (to avoid walking on his bung foot) and in fact took one home after the race to spend some time on.

When the Bomber arrived at our office we pulled it out of the crate, put it together and agreed it wasn’t a bad-looking thing. It looked different … but pretty good. Me, Matt and Boothy had a ride in the carpark for a bit and really just felt uncomfortable on it. Something wasn’t right.

We went back inside to get some work done. About an hour later I said, “I think I want to ride that thing again.” And back out we went. This time it started to make more sense and we began to actually enjoy riding the Bomber. We went back inside.

Then, an hour later, we were back out jumping speed humps and tearing up the bush area behind our building. We spent pretty much the rest of the day on it and then we did it all over again the next day. The Stealth started as a mystery and something of an underwhelming prospect and then in two short days became something we couldn’t stop riding. And that was just at the office! 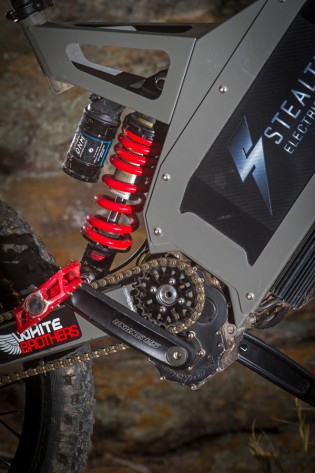 Before we go too much further, it’s worth a moment to have a look at how it all works.

The Bomber is a solid package that feels like it can take a fair bit of abuse via its CroMo frame and swingarm. The whole thing is powered by a lithium battery pack that has a capacity of 1.5kWh and can be topped up while riding via the regen button, which takes the energy generated from braking and converts it back into electrical energy, which is fed back into the battery.

It puts out a peak power of 5.2 kilowatts — something like seven horsepower — but that kind of comparison isn’t all that relevant given the nature of the motor, which is a brushless DC unit mounted at the rear wheel (it’s actually the hub). The battery is claimed to be good for about 700 cycles. 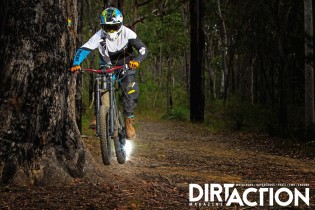 The bike weighs in around 52 kilograms, which seems heavy at first. We were maybe fooled by that mountain-bike look and expected something lighter. Indeed, it’s trail brother; the Fighter is about 20 kilos lighter but the weight comes from the larger battery, which affords a longer range — and that in a nutshell is the tech hurdle all electric bike and car manufacturers are battling, whether it’s Tesla, Toyota or Stealth.

But with that weight comes stability at speed, which was very much appreciated when we clocked up 85km/h. A much lighter bike would have been a scary thing at that speed.

The braking is done back and front by excellent Magura units and the tyres are Duro Razorbacks. 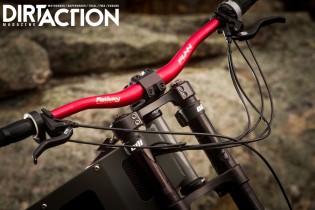 Riding the Bomber on the trails is weird at first. The fact that there’s no noise but you surge forward when you turn the throttle is something that took a minute to get my head around. For my entire life, whether on a YZ80, FE390, 500EXC or R1200GS, when I pulled the throttle, more noise happened and there’s never been an exception to that rule. In fact, on the Aprilia RXV550, that sound was the only thing good about the whole experience. And yet here we are with no sound at all. I rev and I hear birds in the distance.

It soon became apparent that this is not a dirtbike. Not as we know it, anyway. It’s not a mountain bike, either. Try to stay with me here and I’ll empty my brain a bit.

The pedals are there to increases the range of the bike by allowing you to take over for a stretch and they also help give the bike some assistance should it be needed — and I found it needed it on uphills from time to time. That’s cool, I get that, and the system works well. 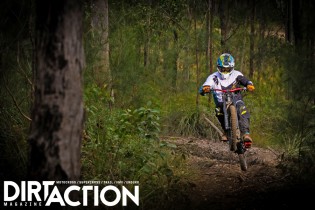 But riding with your feet at the three o’clock and nine o’clock position is really odd for a dirtbike rider. Also, when you drop one pedal to, say, take a corner or shift weight, you’ve now cut your ground clearance in half. I smashed the lowered pedal on rocks and tree roots a few times. I didn’t much like that feeling but I was thinking like a moto rider, not a mountain bike rider. The seat is a mountain bike seat, too, and I was no fan of that, although I do appreciate the weight saving.

There’s also nowhere to grab the bike with your knees so, again, the moto rider in me felt he had less control over the bike.

So these are the main things I was battling with. But while I was running all that through my head, I started to ride faster laps. I was riding twisty single-trail at that point and the track I was on was pretty rough, so it was a good test.

The Bomber overheated a fair bit (you get a warning beep and the bike slows down a bit to protect the systems) in the really tight trails where I was on and off the throttle hard and often. It’s when the track opens up that the Bomber will tear shit up and, after switching to more open trails, it was clear this is where it excels. It’s a rocket when there’s room and it comes on in a smooth push that just builds and builds till you realise that far-off corner now needs immediate attention — thankfully via the brilliant Magura brakes. 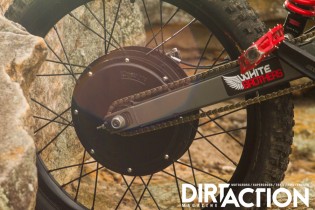 Both the front and back suspension are adjustable and I played a little with the rear to get it right, preferring to allow it faster compression than standard.

You can ride the Bomber fast in the bush and it took everything I threw at it on a pretty shitty and rough track. I rode the Bomber a lot — probably than most test bikes we get during a year — and I appreciate Stealth allowing us to keep the bike for so long to give it a good run and see what it’s like to live with.

I let two blokes I met riding their Huskys in the bush have a ride and I let four of my mates have a ride (two have bikes and two don’t). Everyone who rode the Bomber was at first surprised it was as good as it was and then keen to just keep riding it. Everyone loved it, without exception.

When I got home from rides, I just wheeled it off the ute and two hours before I went for the next ride I charged it up. That’s it. Of course, you can charge it overnight or whenever you like but, aside from oiling the chain, that’s all the Bomber seemed to need.

In all the riding I did, not a thing broke or failed on the bike — and I honestly thought it would, given what I was doing with it over a long period. 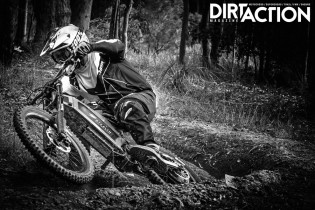 SO WHAT IS IT?

This isn’t a dirtbike. It isn’t a mountain bike. What surprised me the most about this experience is that the Stealth electric bike is a stand-alone concept that borrows from the two worlds but brings something entirely new to the party.

This seems exclusive to bikes because it doesn’t happen with a hybrid car, for example. A Toyota Prius feels like a car and functions like a car — a shitty car, but a car nonetheless. But while the Stealth B-52 Bomber ticks many of the dirtbike boxes it is in fact something very different, and for that I think I like it even more. 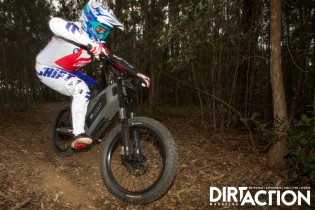 I don’t actually want a replacement for a YZ250, although I do understand that different laws and standards around the world may one day see a bike like that wiped from existence. But for now, liking the Stealth isn’t about turning your back on the screaming fury of a 125 or the brutishness of a 500EXC and, once I got that in my head and started to appreciate the Bomber as an alternative that opens up a whole new world of riding and not a replacement for the world we all love, then the whole e-bike thing started to become more interesting and rewarding.

It’s similar to the way I feel about a trials bike and in fact that’s very much the closest parallel to the Stealth Bomber I can think of when trying to bring the dirtbike and e-bike worlds together. Why wouldn’t you just buy a trials bike, then, right? Well, because the Stealth doesn’t make any noise and that fact alone cannot be understated when we talk long-term future for the dirtbike. There are of course no emissions, either, but I’m still troubled by the dirty process of making and disposing of batteries, so that’s not quite the clear picture of environmental loving-kindness it’s often touted as. 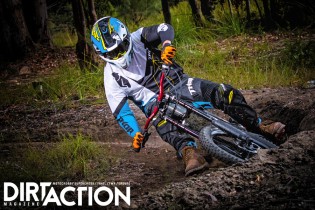 In my opinion, electric bikes will probably dominate the marketplace sometime well in the future. The internal combustion engine is seeing glimpses of an alternative species evolving right before its eyes under the pressure of a technological march forward and green legislation; at some point it will have to compete directly. That usually doesn’t go well for the incumbent technology. But that kind of wholesale takeover is a long way off.

The price is steep at $9900 but that’s not unusual for emerging technology. I worked at an electrical store when plasma TVs first came out and those first models were about $28,000. And that was low-definition! The price will come down in time, no doubt.

In the meantime, my point is this: enjoy the shit out of your 450F but keep an open mind about the Stealth B52-Bomber because you can have both and enjoy each just as much, but in very different ways. The Bomber is one of the most addictive bikes I’ve ever ridden and I can assure you that everyone at DA feels the same way about it (so do my mates and the random two blokes I met riding). Isn’t that the hallmark of a great bike? 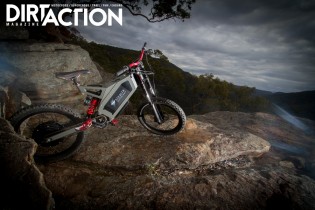 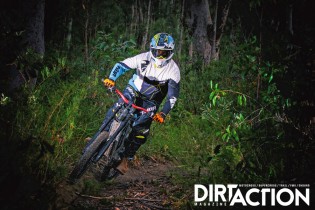 TRAIL WEAPON We hit the dirt on MX1 Australia’s hi-vis, high-bling Suzuki RMX 450 trail weapon WORDS SHANE BOOTH PHOTOGRAPHY MATT BERNARD Here’s a bike that will stop anyone in their tracks. If you catch […]

Bike theft is an unwanted extra that comes with owning a dirtbike. Unfortunately, I speak from experience. […]