Yamaha YZ450F: Yamaha has come out all guns blazing with updates to the 250 and 450 models and we’ve put them to the test

Yamaha was in a spot of bother with the YZ450F. The reverse cylinder model of 2010–13 had gained a bad reputation in the US for its quirky handling and its unpopularity with pro riders. There wasn’t much success in Europe either, so sales in both of those major markets came grinding to a halt.

In Australia, things were much rosier for the YZ450F as CDR won championship after championship on the bike and sales figures here remained strong. But Yamaha knew the bike was in desperate need of an update as it was effectively a 2010 model with new graphics and a white rear guard.

That update comes in 2014 with a heap of hype. In a year when the majority of new bikes are just warmed-over 2013 models, Yamaha comes out all guns blazing with both 250 and 450 all new, hoping to make up for lost time.

Everything! Sure, the cylinder head still faces the other way, but everything on the bike with the exception of the front guard and fork protectors has been changed or updated. It’s an all-new bike, said to have been in development since late 2009. 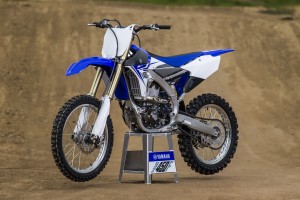 It’s always strange that a manufacturer can change everything on a bike and still end up with a bike that feels the same as the previous model when you sit on it.

The bike is 14mm narrower across the radiators, which is a big step in the right direction. Some riders said it still looked biggish but didn’t notice it when riding. The handlebars are now 10mmm closer thanks to the redesigned frame but retain the four-way-adjustable triple clamps to fine-tune bar placement. Those clamps are rubber mounted to reduce vibration.

The fuel cap takes a bit of getting used to and so far we haven’t heard of any dramas removing the front portion of the seat. The brakes are par for the course. The grips seem to be softer than the rubber cement of a few seasons ago and the bike just feels like a Yamaha.

Everyone in the world wants more power that’s easier to use, but it’s easier said than done. Last year the YZ450F had this abrupt surge as soon as you looked at the throttle, charged hard for the next quarter of a turn and had a little rest before coming back with more aggression in the top end. It was fast and sometimes furious but never dull.

So, for 2014, Yamaha engineers amped up the power, spread it across the entire range and tried to mellow it the instant the throttle was cracked open. You’d have to say they succeeded. It’s still sharp and responsive right from idle, but not enough to set you back in your seat. The power is more metered as it generates ponies in the lower and bottom end and far more manageable than the 2013 donk.

Midrange and top end are muscular and powerful, many saying it’s the most powerful in class. Regardless of what a dyno says, this motor sits right alongside the KTM and the KXF as best in class and you’d be hard pressed to pick a winner as they all offer the right ingredients for a 450cc motocross engine.

The GYTR Power Tuner is a handy tool for fine-tuning power and a simple way to get the most from your YZ450F. It’s not going to drastically alter the nature of the bike but it does do enough to suit the conditions you’re faced with during the day or a season. 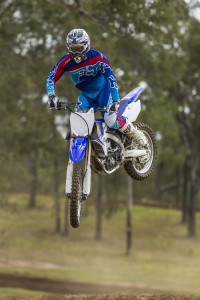 The issue riders faced last year wasn’t the suspension action, as most found the KYB fork and shock to be as good as any in the class. They spoke of a vague front-end feel on corner entry; also, the abruptness of the power made the bike stand up on corner exit.

To get more traction on the front wheel, the front end was pushed in 10mm and the softer power delivery addressed the stand up on exit. The YZ450F is a far better-handling machine than the model it replaces.

When riding the Yamaha back to back with all the other brands, there is certainly more rigidity than can be felt in the chassis. It does feel stiffer on the whole, especially compared to the CRF, which is forgiving and almost feels flexible. Faster riders loved the rigid feel of the YZ as it allowed them to charge at anything on the track. Slower riders opted to take some of that feel out by backing off the suspension settings.

The KYB fork isn’t new but is still very effective. The rumour is that Yamaha elected not to spec its bike with the air fork until it feels it’s better than what the brand already has. The SSS units work well. The shock also does a good job and riders need not be afraid to lower the ride height a little more than usual. Even at 108mm ride height, riders found the bike still turned well but increased its straight-line stability.

The Yamaha is easily the most improved bike in the fleet; it is also the only one that received major changes. The engine is now banging bars with the best of them, the chassis is far more manageable and the handling far more predictable. Yamaha owners will feel a major change in this bike over the last one and it’s all positive.

I definitely was surprised with the Yamaha after what I’ve heard and last time I rode one. The engine was really smooth and strong and the only thing that maybe kept it from the top of the list was [its] being slightly unbalanced. The front felt a little soft compared to the rear but overall it’s much improved from the last YZ450 I rode. 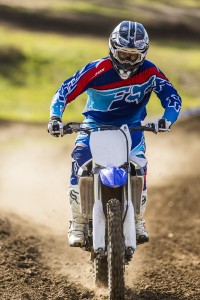 The new Yamaha retains a strong engine that feels as though it’s been refined to deliver its horsepower slightly smoother than the 2013 model. Its overall power is impressive and on par with the strongest in this class. The new chassis has resulted in a much lighter and more nimble feel. The balance of the bike gives a very solid front-end feel and I felt more comfortable when the front of the bike was firmed up and the rear softened slightly. I think the new shape looks nice and modern plus it offers a comfortable seating position. Overall, this bike was at the pointy end of the list for me.

Having a project YZ450F, I was immediately comfortable on the YZ. The cockpit on the Yamaha is very easy to get used to, however. With everything sitting in a comfortable position it’s a bike the majority of riders should feel comfortable on very quickly and with minimal adjustment. I rode the 450 with the bar clamps in the forward and standard positions; I preferred standard. The engine on the Yamaha is very strong but extremely usable; it’s got heaps of poke but comes on in a controlled manner. It’s easy to carry third gear regularly and short shift the bike. I was happy with how the bike handled and found it one of the nimblest across the rough and bumpy terrain. This bike is rated extremely highly in my book and sits firmly alongside the Kawasaki as my favourite bikes out of this bunch.

The YZ has got some serious grunt — the thing pulls like a tractor! It has some serious ponies but I found it to be very manageable. The power was like having a gun under the bed — it’s just nice to know it’s there if you need it. The ability to move the bar mounts forward in triple clamp to open up the cockpit is a great option to have as a bigger rider. The no-fuel-cap idea opens things up as well. No wonder Matt has the new ’14 YZ as his project bike.