Suzuki RMZ450: The Suzook has been a popular mount in the 450 division for quite some time – we test major updates on the RMZ450 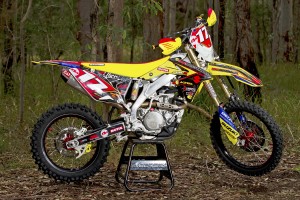 The glory days in the US of Carmichael, Reed and Dungey might be over but Matt Moss has more than picked up the slack in Australia and the bike is always seen as one of the better in the 450 class — and almost the preferred factory bike among racers around the world.

Despite a major update for the 2012 season, the RMZ450 remains one of the older-style bikes. There is no funky sideways-facing motor, vertical exhaust or NASA-approved suspension components. It’s built from years of Suzuki experience and knowledge with a range of components and parts that Suzuki knows works. It might not leap off the showroom floor with bling and technology but is still a very effective motocross weapon.

No much is the right answer. Some of the bike’s styling and design go all the way back to 2008–09 but the majority of things were updated for the 2012 model. The list for 2013 is short and the RMZ is ageing but rumours suggest a new machine is on the way and might be here as soon as 2015. The ECM program was updated as were the radiator shrouds. 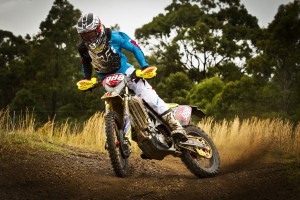 When the hot start lever is on the right, you know you’re on board a Suzuki. The Renthal twin wall bars that grace the top of the RMZ are a comfortable bend and with the slim midsection of the bike it’s easy to climb all over the Suzuki.

Michael Byrne, who hadn’t raced a Suzuki since 2009, put it best when he leapt on board and said it feel like nothing has changed in that time. The layout of the bike is old but not yet dated. The brakes are run-of-the-mill Japanese. The throttle pull is super light, as is the clutch, and the seated position is more neutral than aggressive.

It’s not the most powerful nor the most responsive; it doesn’t have the most torque or top end — but the RMZ motor does offer a good compromise of all those traits and spreads it across the rev range. Its strength is in the bottom and midrange where the roll-on power does a great job of getting the RMZ up on the ground and running.

It falls off a little up top when compared to the KXF, KTM and YZ, but for the conditions and tracks we face in Australia that isn’t a major concern. The majority of our tracks have low average speeds and are point-and-shoot affairs, so the low and mid power concentration works a treat.

We started our testing with the standard coupler but threw that back in the toolbox after a handful of laps, opting for the leaner one. With the lean coupler in, the motor sparked up with a more responsive feel, some hit in the power and a bit of a racers edge. Suzuki suggests the lean coupler works best with the RMZ when in standard trim.

The first change of direction on the RMZ makes you realise this bike is designed to corner. It’s a precise, sharp-turning bike, a trait long present in the majority of Suzuki’s motocross models. Nothing out-turns an RMZ in the big-bore class.

The fork was probably the biggest area of concern as riders struggled to get a setting they liked. Faster guys said it was too soft and went to full hard to get some substance in the stroke, while slower guys went the opposite way to full soft as they complained the bike was too firm. The end result was if you wanted a plush bike, you went soft, but it blew through the stroke; if you wanted it harder you cranked the compression in but you got a harsh ride.

The shock feels a little dead and, despite a heap of changes going on up front from riders, the rear of the bike remained the same. It was workable, certainly rideable and in standard trim a predictable and reliable unit. With the bike already a strong turner, setting the shock up for some stability is a good idea and a 105mm ride height is a good place to start. 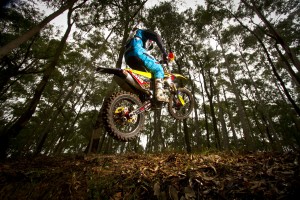 The RMZ has been a popular bike and it’s easy to see why. It’s a simple, uncomplicated machine that works. The motor has nice, strong roll-on power that’s well suited to our local conditions. The chassis wants to change direction as soon as it sees a corner and it’s a very easy bike to use. The only downfall is a fork that requires some setting up. Refined and reliable are two words I would use to describe the RMZ450.

This bike probably took me the longest to feel comfortable on and initially I really couldn’t really put my finger on why. I firmed up the fork, which improved the overall feel quite a bit, and as I became more comfortable and the speed increased the bike felt better. It definitely felt better the harder I rode it. The power delivery was strong but felt like it levelled off ever so slightly in high rpm. The RMZ’s ergos allow you to do what you need to without any problem, which is nice. This bike slotted in just behind the leaders for me.

I found the RMZ to be a bit of an all-rounder. The bar position felt lower than the other bikes but it was still comfortable. The bike had a smooth power delivery that hooked up well on the dry and dusty track. The RMZ to me felt the lightest to handle of the 450s out on the track. I’m also a huge fan of the way the RMZ turns, especially in the flat corners. A good all-round package and very much a race-winning contender in its stock form.

I felt slightly cramped in the Suzuki cockpit, so I’d definitely go for a higher bend of handlebars if I was to own one. The Suzuki had a strong engine, but not quite as beefy as the Yamaha or the Kawasaki and nowhere near the brutal explosion of the KTM. To me, this bike is kind of difficult to sum up with any kind of strong critique. It did everything fairly well but didn’t stand out in one area ahead of the others. With some high bars and maybe an exhaust to let the Zook rev freer, I’d be happy.

The Suzuki’s engine felt good. The rear suspension worked well for me but the front end felt very soft, I firmed it up as hard as I could, which helped, but [it] still never felt like what I was looking for. Maybe it’s the SFF fork that didn’t quite feel right. Perhaps in the future they’ll go to the air fork.